US appeals court to decide fight over jaguar habitat 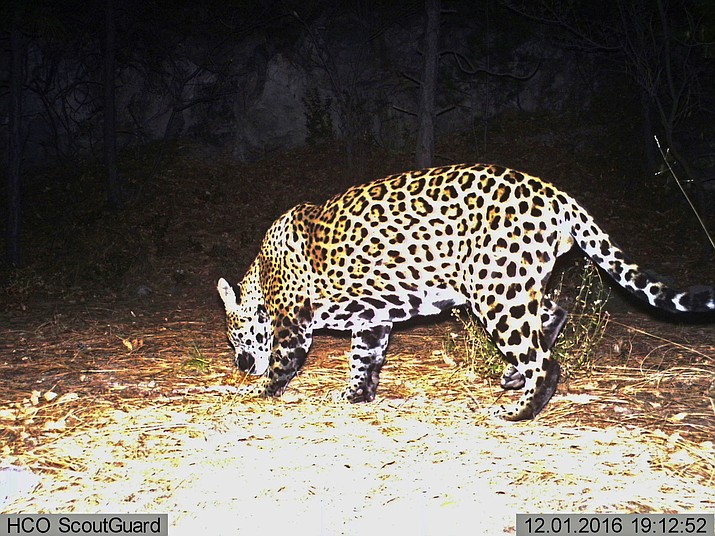 A 2016 image from a video provided by Fort Huachuca shows a wild jaguar in southern Arizona. The 10th U.S. Circuit Court of Appeals in Denver is scheduled to hear arguments Sept. 25 from environmentalists and from lawyers representing a group of ranchers and farmers whether tens of thousands of acres in New Mexico should be reserved as critical habitat for the endangered jaguar. (Fort Huachuca via AP, File)

ALBUQUERQUE, N.M. (AP) — It will be up to a federal appeals court to decide whether tens of thousands of acres in New Mexico should be reserved as critical habitat for the endangered jaguar.

The 10th U.S. Circuit Court of Appeals in Denver heard arguments Sept. 25 from lawyers representing farmers and ranchers wary of setting aside such a large expanse for the cats because few of the animals have been seen in the American Southwest over the last two decades.

Environmentalists have argued that setting aside the territory will be crucial to helping jaguars expand their range beyond their core population south of the U.S.-Mexico border.

"Jaguars have prowled the Southwest's rugged mountains and desert rivers for thousands of years, but they won't flourish again without safeguards," said Michael Robinson, a senior conservation advocate with the Center for Biological Diversity.

The challenged areas are part of nearly 1,200 square miles designated in 2014 as essential for the conservation of the jaguar.

The critical habitat spans parts of southwestern New Mexico and southeastern Arizona. The New Mexico Farm and Livestock Bureau and other ranching groups have argued that much of the habitat in New Mexico is privately owned grazing land. They have said the designation could affect the renewal of grazing permits, the building of stock ponds or fencing and ultimately the ranchers' livelihoods.

Jaguars are found in 19 countries, but only seven male jaguars have been spotted north of the Mexican border since 1996. There were two sightings in portions of New Mexico's Hidalgo County between 1996 and 2006.

The animals have been protected under the U.S. Endangered Species Act for decades.

Reduced habitat, insufficient prey, poaching and conflicts with livestock are among the reasons for the jaguar's decline in the American Southwest over the past 150 years.

In April, the U.S. Fish and Wildlife Service made public a recovery plan for the jaguar that called for two sprawling habitat areas — one from western Mexico into southern Arizona and New Mexico and the other from eastern Mexico through Central America and South American countries to northern Argentina.

The agricultural groups have said the New Mexico habitat amounts to an overly-extensive buffer and that the Fish and Wildlife Service could meet its goals by preserving the breeding population 130 miles (209 kilometers) south of the U.S.-Mexico border.

A federal judge in 2017 upheld the agency's habitat designation, prompting the ranchers' appeal.

Federal attorneys on Sept. 25 again defended the agency's determination that the critical habitat in New Mexico was important to conservation efforts.

It's unclear when the appellate court could issue a ruling.