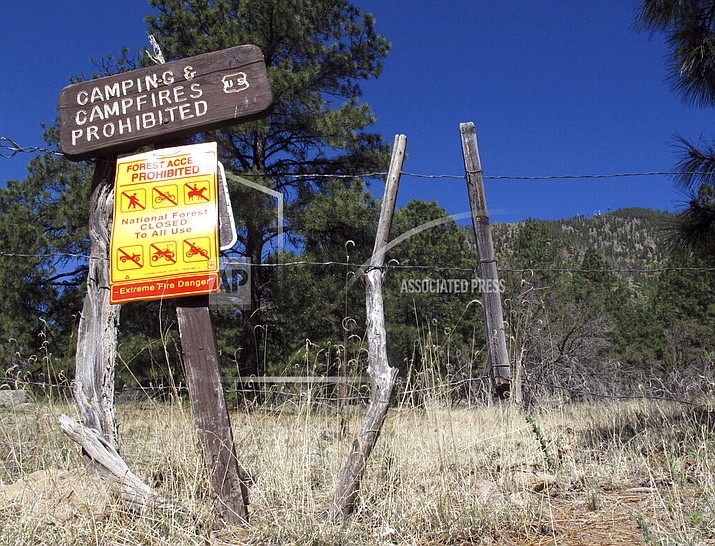 Monsoon season carries high hopes for rain, thunder and lightning across the U.S. Southwest, but it failed to deliver this year. Several communities in northern Arizona had the driest monsoon season on record, including Flagstaff. The season is characterized by a shift in wind patterns and moisture being pulled in from the tropical coast of Mexico. It runs from mid-June through September. (AP Photo/Felicia Fonseca, File)

FLAGSTAFF, Ariz. (AP) — A seasonal weather pattern that brings high hopes for rain, thunder and lightning was a dud across much of the U.S. Southwest this year.

The monsoon season runs from mid-June through September, characterized by a shift in wind patterns and moisture being pulled in from the tropical coast of Mexico.

Usually it means rain that can cool down scorching cities like Phoenix and Las Vegas, water crops in low-lying areas and reduce the risk of wildfire. It also can be disappointing.

Several communities in northern Arizona, including Flagstaff and Phantom Ranch at the bottom of the Grand Canyon, had the driest monsoon seasons on record. Phoenix’s season was the fifth driest recorded. St. George in southern Utah received just traces of rain and most of the Four Corners region didn’t fare much better.

“We were all excited that Utah was completely drought-free for a time and now the Four Corners area and the Arizona border area are now back in,” said Steve Rogowski, a meteorologist in the National Weather Service’s Salt Lake City office.

In Arizona, the mountainous city of Flagstaff normally gets 8.3 inches of rain in monsoon season but had 2.08 inches — the driest in more than 120 years of record keeping. The Grand Canyon airport, Teec Nos Pos on the Navajo Nation and Show Low also had record low rainfall.

The only northern Arizona locale that hit its average was Jerome, a former copper mining town, with 7.33 inches of rain. Tucson and Nogales in southern Arizona came in close to normal.

No other monsoon season was drier in St. George than 1944, when the city had no rain.

Las Vegas got a little more than a quarter-inch from June to the end of September this year, the 14th driest on record.

It’s hard to say why the Southwest overall had less rainfall than normal or explain why rain dumps on one section of a city but not another. For people who live below areas scorched by wildfire, a nearly non-existent monsoon means less of a chance for severe flooding. Same goes for residents who live near or drive through normally dry washes.

“Just about the only downside I can think of is the weather enthusiasts who look forward to the rain and lightning and storms every year,” said Matthew Hirsch with the weather service in Phoenix. “It’s kind of disappointing in that regard.”

National forests in New Mexico and Arizona largely were free of fire restrictions this summer, thanks to an above-average snowpack last winter.

The odds for the upcoming winter are tilted toward above-average temperatures but no strong signal on snow or rain.

Monsoon 2019 closes as the driest on record for a handful of Arizona cities
El Niño could bring drought relief to Southwest
Experts: Don’t look to monsoon season for weather relief any time soon
Williams monsoons: Where have all the storms gone?
Monsoons move Williams precipitation close to norm
Event Calendar