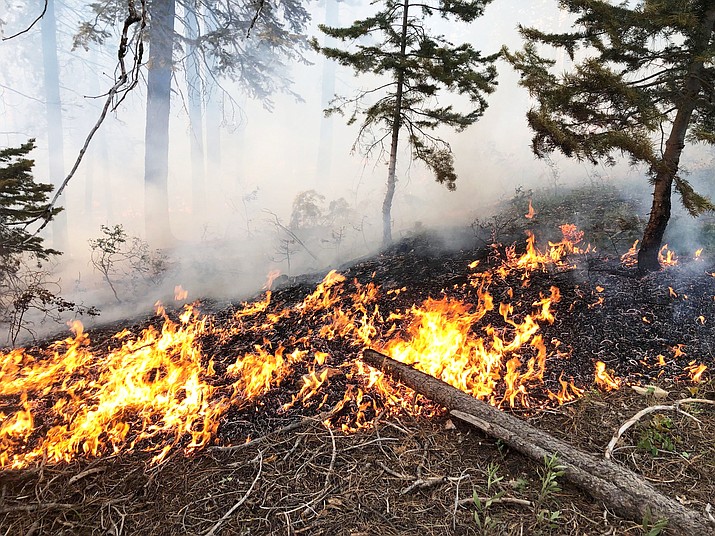 Fire moves across the ground through dead pine needles during an earlier fire in 2019. (Photo/InciWeb)

GRAND CANYON, Ariz. - After two days of strong winds over the wildfire, minimal growth occurred in critical areas of the Ikes Fire on the Kaibab Plateau. 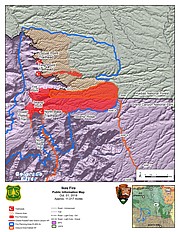 The wildfire remained at a little more than 11,000 acres in size despite the high wind event.

Last week, two helicopters were used over portions of the fire below the canyon rim in Quaking Aspen Canyon to reduce the threat to unburned areas on Kaibab National Forest lands northeast of Fire Point. While the helicopter water drops did not entirely extinguish the wildfire, they did moderate fire behavior during the critical wind event.

There is still potential for the Ikes Fire to move into unburned areas above and below the canyon rim. To prepare for this, fire crews have burned out along a containment line at Forest Road 271 on the North Kaibab Ranger District of the Kaibab National Forest in order to assist in the control of future fire growth. Fire managers are also evaluating other potential opportunities to contain or limit the spread of the wildfire.

Although windy conditions will continue over the next several days, they are not expected to be nearly as severe as those that occurred Saturday and Sunday when the National Weather Service predicted sustained winds of 25 to 30 mph with gusts to 45 mph. Besides the high, gusty winds on Sunday, there were also low relative humidity levels, which were recorded at 14 percent.

Because of concerns for public and firefighter safety, the Rainbow Rim Trail and the viewpoints from Parissawampitts Point to Stina Point on the North Kaibab Ranger District are closed. Crazy Jug Point north of Parissawampitts is open. For hikers and mountain bikers, the Arizona National Scenic Trail is an alternative recreational opportunity while the Rainbow Rim Trail is closed. The Arizona National Scenic Trail is accessible from many points along Highway 67 and offers a variety of scenery, including views into the Grand Canyon.

Highway 67 and the North Rim Village, North Rim Lodge and businesses are open. However, some road and trail closures are in effect for the Ikes Fire area within Grand Canyon National Park. The following roads and trails are closed on the North Rim:

• W4 road north of the intersection of the W4 and W1 Roads.

Smoke production from the Ikes Fire was minimal over the weekend but may be visible to those visiting the North Rim of Grand Canyon National Park and the North Kaibab Ranger District of the Kaibab National Forest. Visitors traveling to the area should be aware of possible smoke along Highway 67. Visitors are asked to drive carefully and turn headlights on for safety. For local air quality and related information, please visit the following websites: www.airnow.gov or the Smoke Management Division of the Arizona Department of Environmental Quality at https://azdeq.gov/SmokeManagemet.

More information can be found at InciWeb at https://inciweb.nwcg.gov/incident/6475/. Visit www.nps.gov/grca/learn/management/firemanagement.htm for additional information about wildland fire at Grand Canyon National Park.

More information about the Kaibab National Forest is available at www.fs.usda.gov/kaibab or @KaibabNF on Facebook and Twitter.