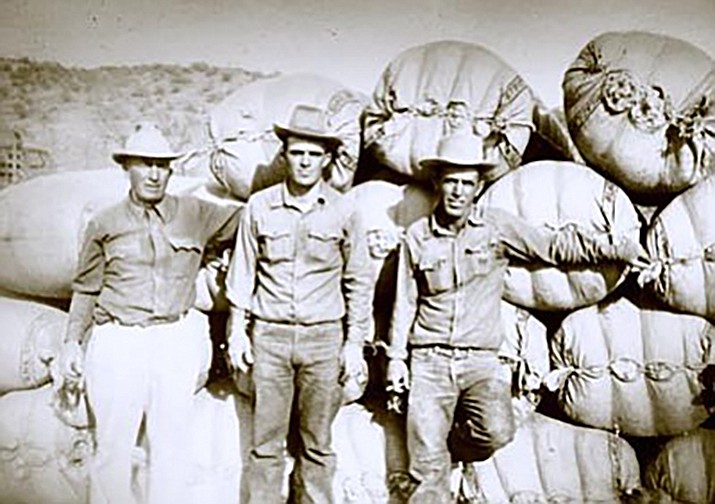 After a long day of work, Joe, Albert and Pierre Pouqutte stand in front of multiple bags of wool. The Pouqutte family has a long history of sheep herding in northern Arizona. (Photo courtesy of the Pouquette family collection)

WILLIAMS, Ariz. — As a sprawling nation began to spread its wings towards the setting sun, a modest band of pioneers cascaded upon the vast plains of northern Arizona in hopes of planting their roots in greener pastures.

In the early hours of Arizona’s infancy, a thriving sheep industry had expanded into Bill Williams country and the Manterolas, Auzas and Pouquettes trailed the flocks closely behind. While several families contributed in the creation of a substantial wool industry among the Arizona pines, this trio utilized the immense prairies of the Kaibab Plateau more than any other. Each family would experience fortune and hardship in their quest, and at this moment only two remain.

At the age of seventeen a Spanish Basque born in Sumbilla, Navarra named Jose Antonio (Tony) Manterola arrived in America in 1907 to seek out his fortune. Manterola landed his first herding job in Van Horn, Texas where he would herd his first flock across the wide Texas range alone for three years before migrating to Arizona to work for larger sheep outfits.

In 1922, Tony Manterola, Fermin Echeverria, Mario Jorajuria and Mike Ohaco would form the O’Haco Sheep Company as equal partners. The four Basque men successfully grew their operation to become what was said to be the largest sheep company in the state at the time.

In 1945, Tony sold his stake in the O’Haco Sheep Company and purchased the Flagstaff Sheep Company from Dr. R O. Raymond; thus, the Manterola Sheep Company was born. Tony quickly acquired land allotments throughout northern Arizona for summer grazing and moved to a new ranch east of Williams in Garland Praire. After Tony’s death in 1956, his wife Marianna and oldest daughter Sylvia temporarily took over the sheep outfit along with Frank Auza until Tony’s son Joe Manterola was old enough to grab hold of the reigns.

Today, the Manterola Sheep Company is run by Tony’s children, Sylvia and Joe and remains one of the last two large sheep operations in Arizona. While the wool industry faces extinction in the southwest, Joe Manterola continues to push his flocks across Arizona plains as his father did before him.

The Auza’s entered the Arizona sheep trade over a hundred years ago when the father, Frank Auza, emigrated to the U.S. in 1915 at the tender age of ten. Frank only spoke Basque upon his arrival to America and was forced to use sign language to communicate before learning both Spanish and English. Frank found work in Flagstaff, Arizona shepherding for Pierre Espil, for about eight years until he went to work for Dr. Raymond, herding sheep at Howard Lake. Frank briefly assisted the Manterola’s in running their sheep company after Tony Manterola’s death in 1956 and in 1959 purchased Dr. Raymond’s sheep outfit. In 1962 Carmen Manterola married into the Auza family and had two children, Joe Jr. and Yvette. Joe Jr. created the Joe Auza Jr. Sheep Company and continues the family tradition of herding sheep across the Kaibab to this day. Like the Manterolas he faces an uncertain future in an industry that is rapidly beginning to disappear.

The Pouquette’s arrived in the United States from France in the late 1890s and first settled in California. In the early 1900s Joseph Pouquette married his childhood sweetheart, Marguerite Bordenave and moved to Ash Fork, Arizona where he would purchase a modest lot of 3,000 sheep. After serving in the army as an interpreter in France for two years in World War I, Joseph moved his family and his sheep business to Williams in 1920.

Over the next several decades, Joe would move his family back and forth between Williams and Wickenburg as the sheep had to be relocated for summer and winter grazing.

In 1967, Joseph Pouquette was considered to be the oldest living sheep owner still in business in Arizona. After Joseph’s death in 1968, the sheep business would continue under the supervision of his two sons Pierre and Albert. Albert Sr. had been working with his dad in the sheep trade since about 1946, a year after the Pouquette’s had purchased a plot of land that would soon become known as the Red Hill Ranch. Albert and his wife Edith played a pivotal role in the operation of the Red Hill Sheep Company over the next forty years until Albert made the decision to sell the business to Joe Auza around 1984. Thus ending the fourth generation of Pouquettes as sheepmen.

The path each of these families chose to take was by no means easy or glamorous, but the impact they made to the growth and economy of northern Arizona of the last 100 years will forever be felt. Their legacy and the history of sheepherding in Arizona as a whole is quietly vanishing into the dust, sand as the Manterols and Auzas struggle to hang on, it may soon vanish for good.