Boulder Alley Boys make a name for themselves at Grand Canyon 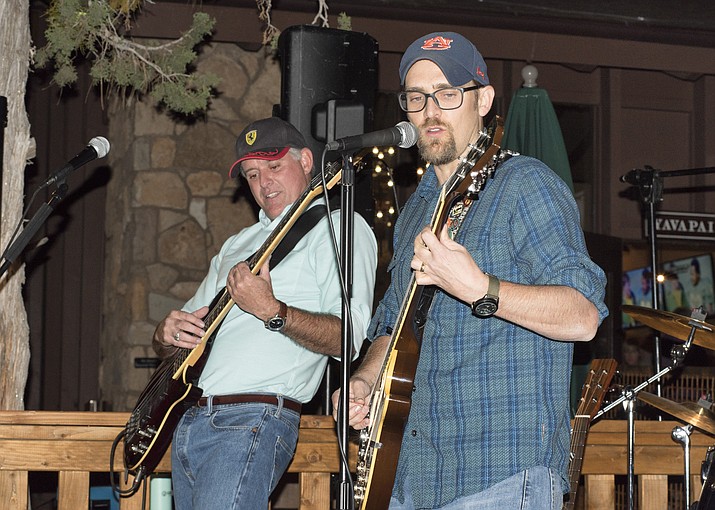 The Boulder Alley Boys has made a name for itself playing at local venues at the Grand Canyon. At one time, Mike Slagle (left) played in a professional house band and won “battle of the bands” as the youngest act. According to Courtney Dixon (right), Slagle also had a brief encounter with Eric Clapton. (Veronica R. Tierney/WGCN)

GRAND CANYON, Ariz. — There’s a lot of musical surprises at Grand Canyon Village and four of them are the Boulder Alley Boys who warmed up the Yavapai Tavern outdoor patio last Friday and Saturday nights with a collaboration of rock, blues and country tunes.

Over a four-hour period the band played about 50 songs ranging from the Beatles to Lynyrd Skynyrd with cuts from Johnny Cash and Hank Williams.

The music genre has changed throughout the years with the current Boulder Alley Boys playing a lineup of old and new, rock, blues country and definitely a smattering of original music as well. From left: Mike Slagle, Courtney Dixon, Bill Edwards and Joel Bredeson. (Veronica R. Tierney/WGCN)

“The Boulder Alley Boys complemented the energy and experience that comes from visiting the Grand Canyon,” said Duffie Westheimer, clerk at the Flagstaff Public Library. “They were a great deal of fun….my puppy even enjoyed the music.”

Comprised of employees from Xanterra and Buck Wild Hummer Tours, the band has been rocking the Grand Canyon Village for about three years.

Courtney Dixon, lead and rhythm guitarist and singer-songwriter grew up in Tennessee. Dixon has played guitar since he was 16 and plays bass and banjo as well.

“My parents gave me an old Alvarez acoustic guitar and to this day it’s my favorite,” he said.

One of his hopes is to break into the Williams and Flagstaff music scene with high hopes of playing at the Orpheum Theater someday.

Dixon’s daytime job is Director of Purchasing for Xanterra.

Multi-instrumentalist Joel Bredeson has played guitar for almost 50 years. He grew up in Michigan and left “real life” seven years ago.

The music genre has changed throughout the years with the current Boulder Alley Boys playing a lineup of old and new, rock, blues country and definitely a smattering of original music as well. From left: Mike Slagle, Courtney Dixon, Bill Edwards and Joel Bredeson. (Veronica R. Tierney/WGCN)

“My wife and I moved to Yellowstone, spent four years there then started coming to the Grand Canyon in the winters,” Bredeson said. “We came here full time two years ago.”

He plays solo gigs at various venues as well as the music at Sunday services at the Grand Canyon Community Church. For two summers he was the singing cowboy at the Roosevelt Corral in Yellowstone.

Mike Slagle moved to the Canyon about six months ago to fill the position of Retail Director for Xanterra. As lead and rhythm guitarist, his impressive background includes years as a full-time musician playing at Billy Bob’s (largest honky-tonk in the world), Dallas Palace, Six Flags and an event for the Dallas Cowboys.

“I started playing guitar when I was eight years old and played with several Nashville recording artists,” Slagle said.

Along with playing with Juniper Hill, another local band, drummer Justin Bertrand is one of the newest members of the Boulder Alley Boys. He was out of town for last weekend’s gig. Bill Williams, a drummer who now lives in Prescott, sat in for Bertrand. Bertrand is employed with Buck Wild Hummer Tours.

“Delaware North is excited to add an outdoor patio to Yavapai Tavern,” said Michelle Hansen, Marketing Coordinator for Delaware North. “We’re even more thrilled to add a live music stage. The patio and stage not only provides a great new visitor experience at Yavapai Lodge, but it also provides a venue for local bands like the Boulder Alley Boys, whose members are co-workers, community members and even a family member in one case.”

“As a first time visitor to the Yavapai Lodge, hearing the Boulder Alley Boys was both joyful and delightful,” said George Dorado Bianco, Flagstaff artist. “From the melodious sound of the lead guitar to the rhythmic tempo of the bass, the band kept the audience engaged in dancing and cheering. It seemed like everyone was having a good time.”

As customary for the Boulder Alley Boys, the band ended with the Mexican Folk song La Bamba. Their next gig is Oct. 17 at the Bright Angel Lodge.