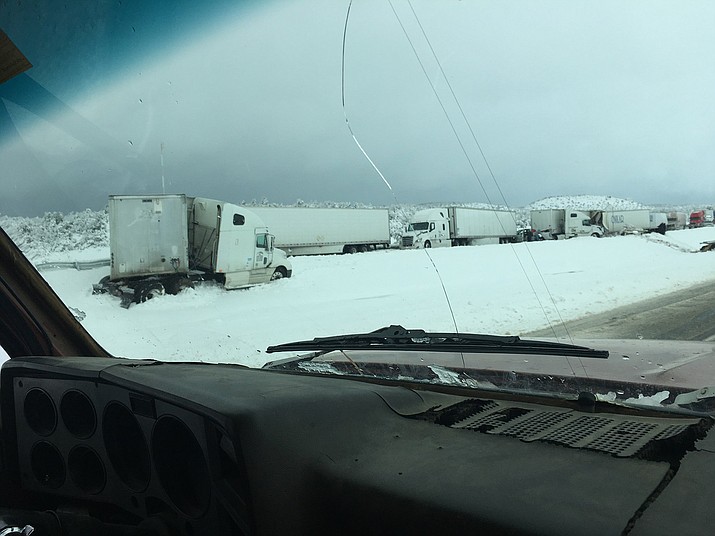 An accident has blocked travel near milepost 113 on Interstate 40 just west of Seligman. (ADOT photo/user @heidinmo)

Snow showers persist over northern Arizona, however, showers are expected to gradually decrease from west to east this evening and tonight ending early Saturday morning.

For this afternoon and evening, be prepared for rapid changes in visibility and quickly accumulating snow under these showers.

ADOT reports that many roads have reopened, but are still recommending not traveling unless necessary.

Friday night there is a 50 percent chance of snow showers. It will be mostly cloudy, with a low around 11 degrees. There will be a southwest wind 7 to 17 mph, with gusts as high as 21 mph. New snow accumulation of less than one inch possible.

Saturday will be mostly sunny, with a high near 32 degrees. There could be a south to southwest wind around 5 mph becoming light and variable in the afternoon.

Saturday night will be partly cloudy, with a low around 13. Light and variable wind becoming east around 5 mph after midnight.

Temperatures are expected to slowly increase to about 49 degrees through the weekend with a chance of snow showers Tuesday.