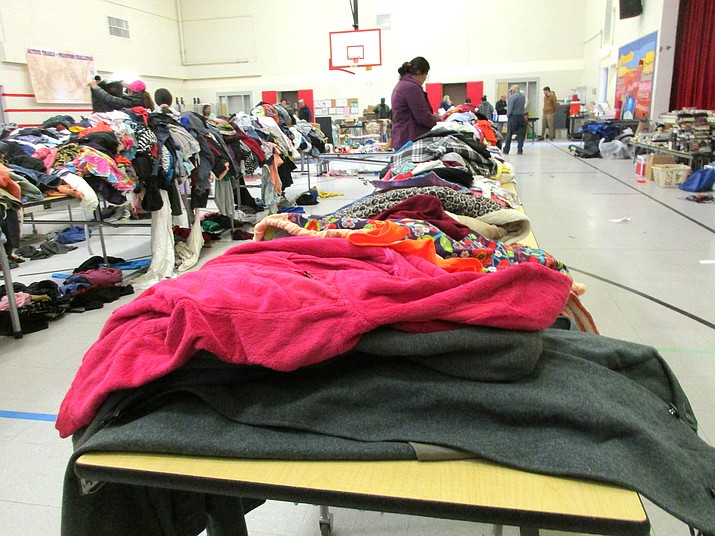 Tables covered in clothing fill half of the high school gym Nov. 23. Volunteers arrived early the day before to help set up. (Abigail Kessler/WGCN)

GRAND CANYON, Ariz. — On Nov. 23, tables at the Grand Canyon School gym were covered in an assortment of items, including posters and crock pots. All awaiting the arrival of Grand Canyon residents to find a new use for them.

The Grand Canyon Lion’s Club rummage sale benefits area residents. The event happens several times a year and sells items from the Park’s lost and found, as well as many other donated goods.

Items are housed in a pair of storage sheds in the Park until the time for the sale comes again. This sale in particular was around two months overdue, one club member commented. Both sheds were full, one packed literally wall-to-wall – the sale had a larger-than-usual variety.

People leave all kinds of things in the Park and there are some good deals for those who know what they are looking for. An early arrival is recommended to these sales, because the name-brand items tend to sell fast.

A Canyon resident looks over a selection of books for sale. (Abigail Kessler/WGCN)

Even later in the day, though, the tables are still piled high with clothing, gear and a variety of other items. Lion’s Club members tend to lay an array of sleeping bags and camera accessories, helping customers sort through the stacks. Once the sale is over, a team of volunteers load any remaining items into a truck to be donated and the storage sheds again start filling with abandoned belongings awaiting a new home. (Don’t worry if you’ve lost something, though--there’s at least a 90-day wait period before anything is transferred from lost and found).

Lion’s Club members started preparing for the rummage sale as early as 8 a.m. Nov. 22. They set up tables, arranged items and tend to several other tasks, including jobs like winding up a cardboard box full of abandoned charging cables, for example. There are people working in the gym until about 6 p.m. that day.

Club Secretary William Donley has been participating for over 29 years, as volunteerism is a value passed down through his family.

“[The sale] has been happening, I think almost 40 years,” Donley said. “When I first came out here it used to be called the white elephant sale.”

Event volunteers find participation in Lion’s Club activities a rewarding way to give back to the community. Among other things, the club offers scholarships to local students. During the sale, club members also have help from other community members. People from the Canyon usually pitch in, including students from the school.