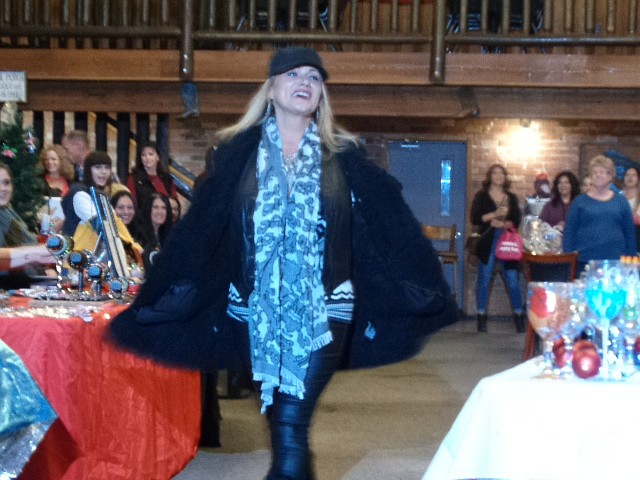 Gloria Rodriguez electrifies the runway while flaunting apparel courtesy of Civitan on 66 at the 8th annual Girls Night Out Nov. 22 in Williams. (B. Garibay/WGCN)

WILLIAMS, Ariz. — There was no better place to be Nov. 22 than at the 8th annual Girls Night Out at Miss Kitty’s Steak House in Williams.

The scholarship fundraising event was organized by owner and operator of Amanda’s Beauty Box, Amanda Orozco.

During the event, hundreds of local residents spilled through the steakhouse doors and were greeted by the warm smiles of over 30 local vendors and artisans proudly displaying their handiwork in every corner of the country-themed dining hall.

Granola Guru Christi Endicott was in attendance, sampling out her all natural Ola Granola products; Maggie Mathissen’s holiday eye-catching booth was smothered from end to end with mason jars stuffed with grandma Oma’s secret applesauce and Hemp Worx proprietor Seles Howe educated the crowd on the benefits and war chest of uses that CBD oils have to offer. Each of the 30 plus vendors on hand offered an array of unique products and trinkets for both men and women to purchase before the Christmas shopping frenzy turned their piggy banks upside down.

As the crowd level kicked into overdrive mid-way through the evening’s gala, a handful of luxurious, local ladies set fire to the floor as they strutted from north to south draped in the most fashionable jewelry and attire any women would be proud to possess, all furnished by the non-profit organization, Civitan on 66. While the fun loving mass of local residents dropped their stress and steamed up the cool windows with laughter and conversation, the true mission behind the evening’s event sat quietly among the shadows in the balcony above, waiting for its moment to be revealed.

By 2001, Amanda Orozco had already established herself as a gifted beautician and successful business owner throughout the Williams’ community, and on a weekend trip to the Valley of the Sun, she stumbled upon an idea that began to spread its roots in-between her every thought.

“I started Girls Night Out eight years ago after being inspired by a similar event that was taking place in the Valley and thought it would be awesome for Williams,” Orozco said. “I started the event and donated all the money we raised from the raffles, vendors and Amanda’s Beauty Box sales to the school or other groups in town for the first five years. The funds raised over the past three years have gone into the Amanda’s Beauty Box Scholarship, which has totaled $1,500 each year.”

In 2018, the scholarship was split among three Williams High School students who would utilize the much-needed funds to advance their education in hopes of creating a brighter future for themselves.

The atmosphere, created by all those in attendance was one of jubilation, freedom and vision and while the annual shindig continues to spread its wings in its quest to reach new heights, it is important for local residents to remember what the night of fun, fashion and community comradery is really all about. More information on how to donate to the Amanda’s Beauty Box Scholarship Fund is available from Amanda Orozco at (928) 699-1606.