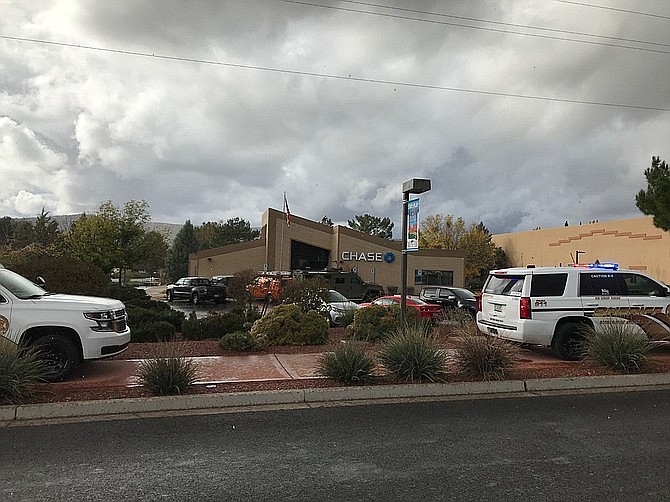 Officers at the scene of a bomb threat in the Village of Oak Creek Thursday, Nov. 21. (YCSO/Courtesy)

As of 3 p.m., Highway 179 is closed at Verde Valley School Road due to the bomb threat.

Authorities are currently working a bomb threat outside a Chase Bank in the 6600 block of Highway 179 at Verde Valley School Road in the Village of Oak Creek.

Police received a call at around 12:20 p.m. about a man causing a disturbance inside the bank and claiming he had a bomb in his van parked outside, according to a Yavapai County Sheriff’s Office (YCSO) news release.

Though the man broke out a window and was acting strangely, employees and customers were able to eventually evacuate safely, the release states.

Deputies arrived and managed to take the man into custody inside the bank.

The man's orange van remains parked outside the bank and the surrounding area has been evacuated, the release states. A Department of Public Safety (DPS) bomb detail is en route and will determine if there is, in fact, a bomb.

Roads around the bank are currently open, but will likely be closed once DPS bomb techs arrive.

The YCSO’s armored vehicle is driving to the scene in case further personnel protection becomes necessary, the release states.