Report: 16 Arizona dams rated high-hazard and in poor shape
Dam near Fredonia is one of multiple dams in disrepair 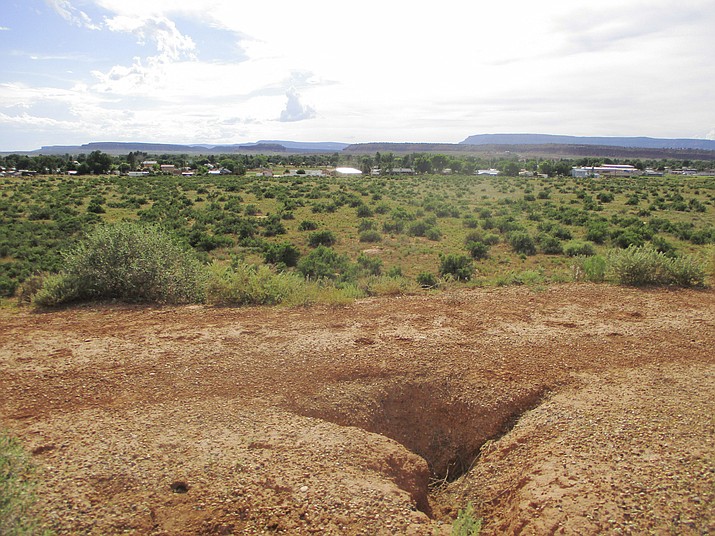 The Fredonia Dam is one of 16 high hazard dams in Arizona that an Associated Press investigation revealed to be in poor or unsatisfactory condition. (Photo/Arizona Department of Water Resources via AP)

FLAGSTAFF, Ariz. — An earthen dam that lies directly upstream from Fredonia, just south of the Utah border, has long been classified as unsafe — repairs constantly delayed by lack of money.

A breach during a severe storm would put hundreds of people in the town of 1,300 at risk of potentially catastrophic flooding.

The federal government had committed 65 percent of the $10 million to $12 million needed to convert Fredonia Dam into a levee and floodway to direct the water toward a natural creek, but that funding expired in September. The town hasn’t been able to come up with its share of the money, shelving the project indefinitely.

Valentino Reyes, a spokesman with the U.S. Department of Agriculture’s Natural Resources Conservation Service, said there is no guarantee the dam would be able to hold up against a 100-year flood. The department built the dam in 1973.

“The risk of leaving the dam as is, is that due to its current condition there is a potential that the structure could fail, which could turn ugly if the structure is retaining any significant amounts of water,” he said.

Fredonia Dam is one of 16 high hazard dams in Arizona that an Associated Press (AP) investigation revealed to be in poor or unsatisfactory condition. A dam is considered high hazard by the federal government if a breach would be likely to kill people downstream.

The more than two-year investigation by the AP identified at least 1,680 such dams in the 44 states and Puerto Rico for which the AP obtained condition assessments. Arizona ranked 22nd in the number of high hazard-poor condition dams, according to the analysis.

Emergency plans obtained by the AP indicate that thousands of people across the country living and working downstream could be at risk if those dams were to catastrophically fail, while separate inspection reports cite a variety of problems. Those include leaks that can indicate a dam is failing internally, unrepaired erosion, holes from burrowing animals and extensive tree growth, which can destabilize earthen dams. In some cases, inspectors also flagged spillways that are too small to handle the amount of water that could result from increasingly intense rainstorms due to a changing climate.

In Arizona, the latest inspection for the Fredonia Dam conducted earlier this year found embankment cracking that caused erosion within the dam itself, as well as holes and depressions on the surface. The report by the Arizona Department of Water Resources also found erosion on its banks.

For at least the past three years, the department has said it is critical the dam be rehabilitated soon because it sits upstream from the town.

The emergency action plan lists hundreds of businesses and residential addresses of people who would have to be alerted in a flood. The nearest development is about 100 yards away. The town’s high school, city hall, highways and farmland also could be inundated.

“The little money they do have is probably better spent doing what little maintenance they can do on the dam,” he wrote in an email.

Fredonia’s interim manager didn’t return repeated requests for comment, and the mayor did not return an email seeking comment.

Former town officials have said Fredonia has been devastated by the decline of the timber and mining industries. Many residents work in trades, including heavy equipment operating and welding, and travel away from Fredonia for jobs. Tourist attractions within a 90-minute drive include the Grand Canyon’s North Rim, Zion National Park and Grand Staircase-Escalante National Monument, but travelers have the option of staying in larger towns such as Kanab, Utah, or closer to the Grand Canyon in Jacob Lake.

Christy Riddle, a former town clerk and former interim town manager, now works as a payroll clerk for the school. She said groundwater wells and a water treatment plant have been a higher priority than the dam and said people rarely talk about the potential risk of flooding, considering the region gets scant rainfall. Not everyone believes the fixes are worth the investment.

The dam started cracking and eroding a couple of years after it was built. Some repairs were done in 1982, but in 2001 the Department of Water Resources declared the structure “unsafe, non-emergency, elevated risk.”

The state Department of Water Resources, which is responsible for inspecting dams around the state, set aside $1 million to help cover the town’s share of the repairs, which would include lowering the embankment by about 12 feet, lining the existing banks and grading a new water channel. Riddle said the town hasn’t been able to come up with the rest.

“It’s almost like, ‘Who can we get to give it to us?’” she said. “It’s like trying to find a grant on top of a grant because there’s no room for a loan.”

Former town manager Philip Cushman said late last year that some people also are skeptical of the federal government and of the need to fix the dam, himself among them.

“Some of that actually is pretty fair, especially when the government comes and tears (apart) your local economy with regulations,” he said. “It’s a complicated project, and it’s been a long, long process.”