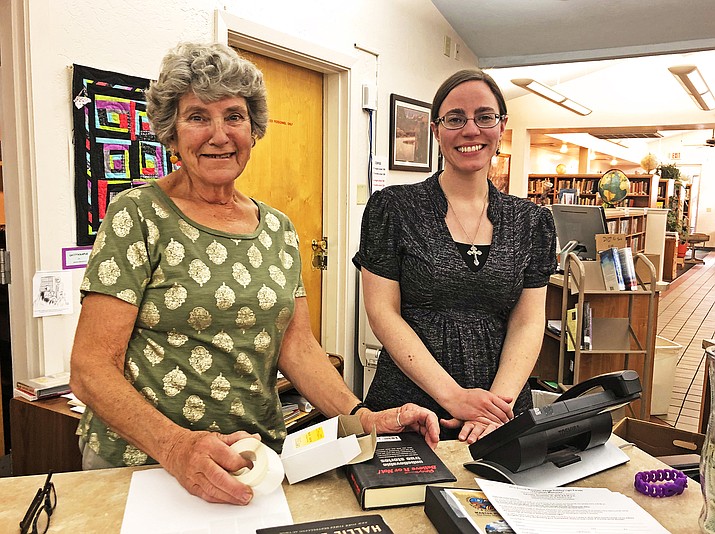 WILLIAMS, Ariz. — Mary Corcoran is thrilled to be stepping up as the new head librarian at Williams Public Library. She fills the big shoes left behind by retiring librarian Andrea Dunn, whose last day was Nov. 6.

Corcoran most recently worked for the Flagstaff Public Library at the reference desk.

Corcoran worked three years at the Flagstaff Public Library, one year as a high school librarian and interned at the Tumamoc Hill Desert Laboratory. The laboratory is an 860-acre ecological preserve in Tucson that conducts long-term environmental studies.

“They study nature, plants and the desert,” she said. “I worked at their library and cataloged about half their collection.”

Corcoran grew up in Flagstaff and graduated from Flagstaff High School. She also worked at the school as a substitute teacher after graduation.

She said she got interested in being a librarian after volunteering Flagstaff.

“I poked around volunteering, weeding the collection, and found I liked working at the library,” she said.

She plans to move full-time to Williams and dive into her new position at the library.

“I love working with people,” she said. “I love weird and interesting questions people ask.”

Corcoran said she loves books, organization and helping people and found that libraries are a perfect fit.

“I’m excited to be here, but there is definitely a learning curve because I was in the reference department before,” she said. “That’s just one little part of what libraries do.”

she said the Williams library is a mix of duties.

“You have to do everything,” she said. “I’m excited but I need to figure out quite a bit.”

She’s learning different policies even though its on the same system as Flagstaff. We’re also hoping to move some books around to fit more books in.

Corcoran enjoys hiking, creative writing and arts and crafts. She looks forward to exploring Williams and meeting the community.