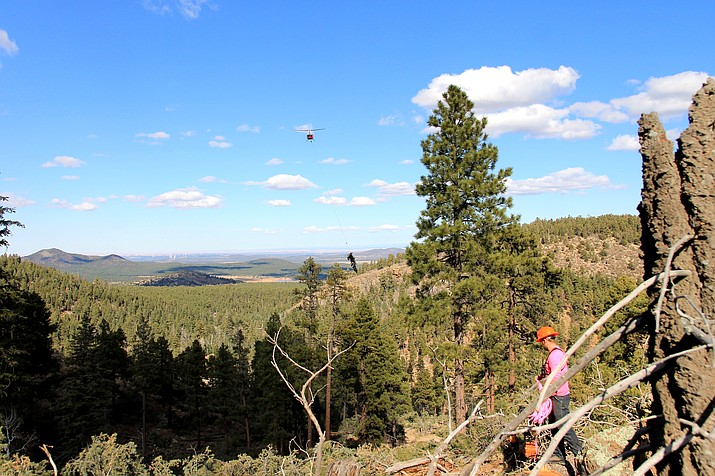 Aerial logging is being conducted through December to help reduce the risk of fire and flooding hazards on the northeast slope of Bill Williams Mountain. (Wendy Howell/WGCN)

WILLIAMS, Ariz. — Forest thinning and restoration of the steep slopes of Bill Williams Mountain is underway.

Although restoration work has been ongoing at several locations on the mountain over the past few years, the 300 acres is unique and requires aerial methods to remove the timber. Markit! workers spent the past month preparing the removal of hazardous fuels with a 23-person crew responsible for felling, bundling and prepping the site for flight work.

“One of the reasons this area was chosen is because all of this washes own into the Santa Fe Reservoir,” said Spencer Plumb with the National Forest Foundation. “If this was to burn, all that ash and debris would come down and we don’t know if that dam could hold everything back.”

Markit! Forestry was hired by the National Forest Foundation to tackle the steep slope operation on the mountain.

“We handle all kinds of difficult situations and resolve problems,” said Markit! Regional Operations Manager Bryan Zebrowski said. “We do a lot of specialized steep ground work. We found that very few people specialize the way we do.” 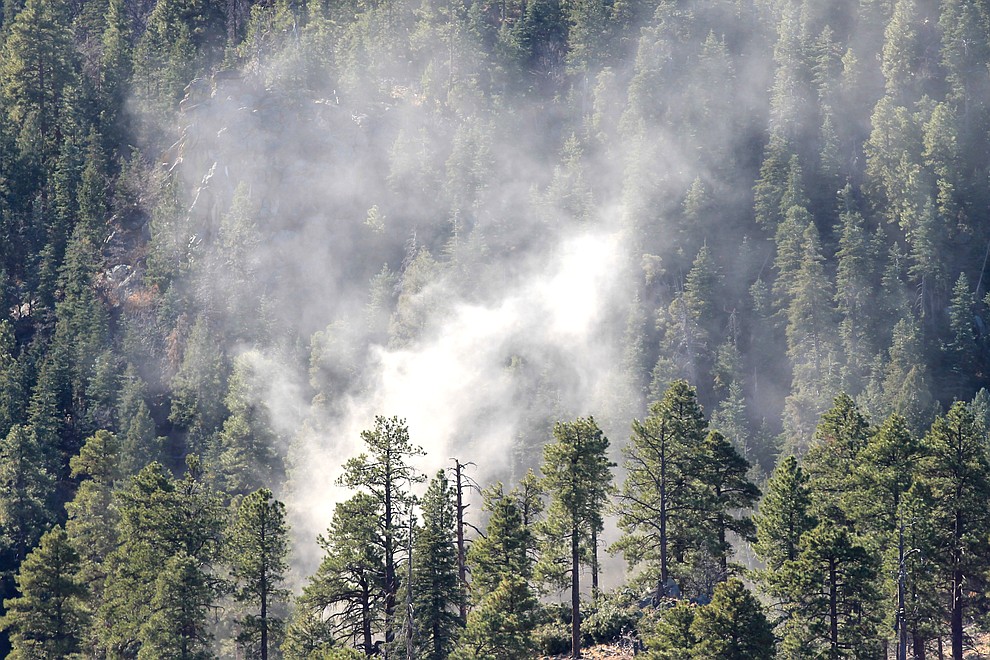 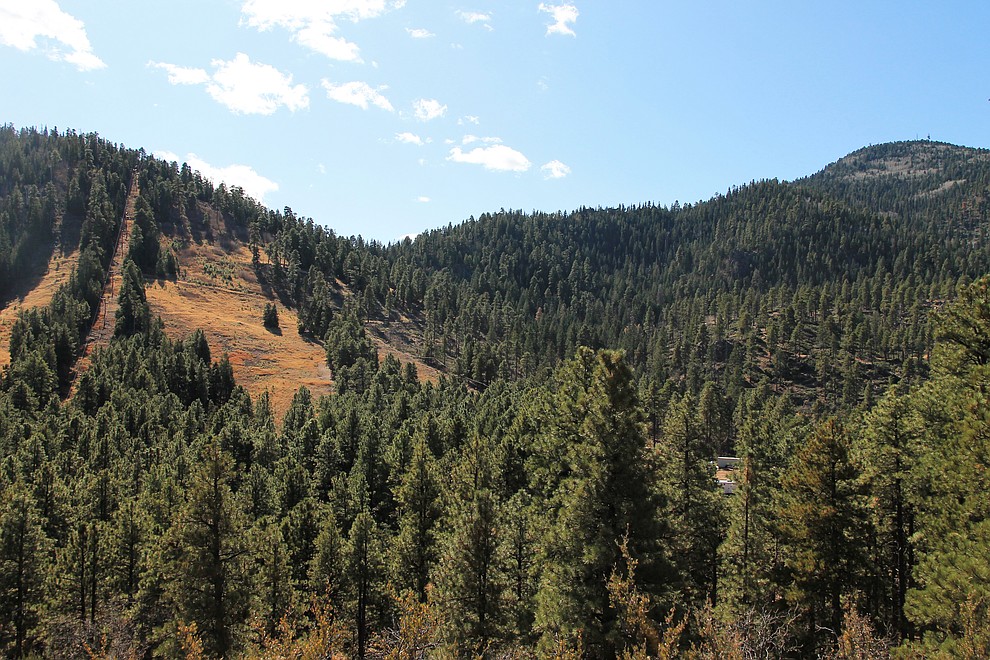 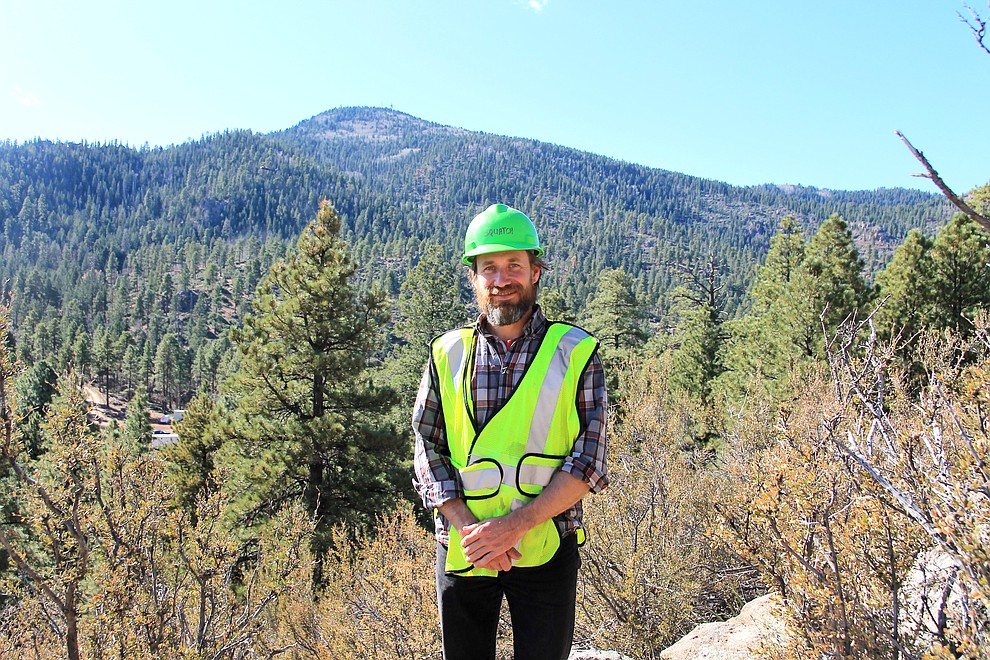 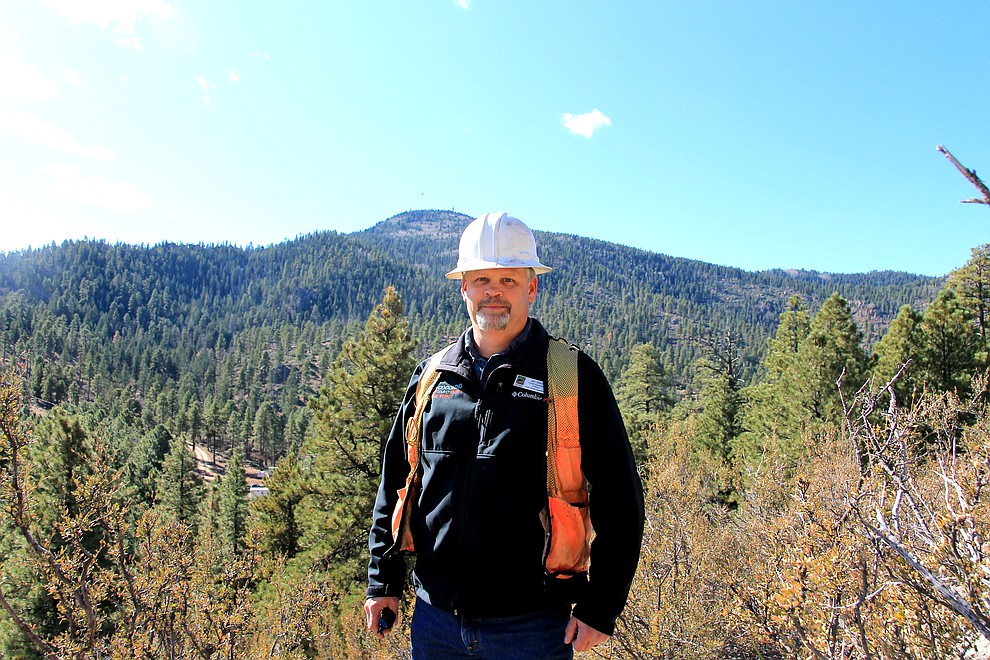 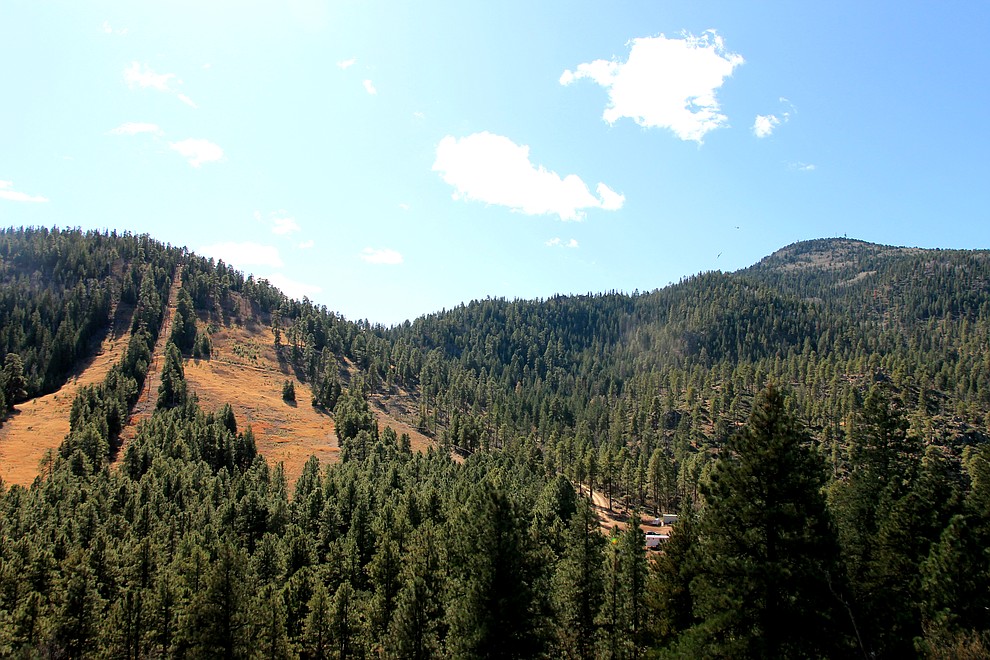 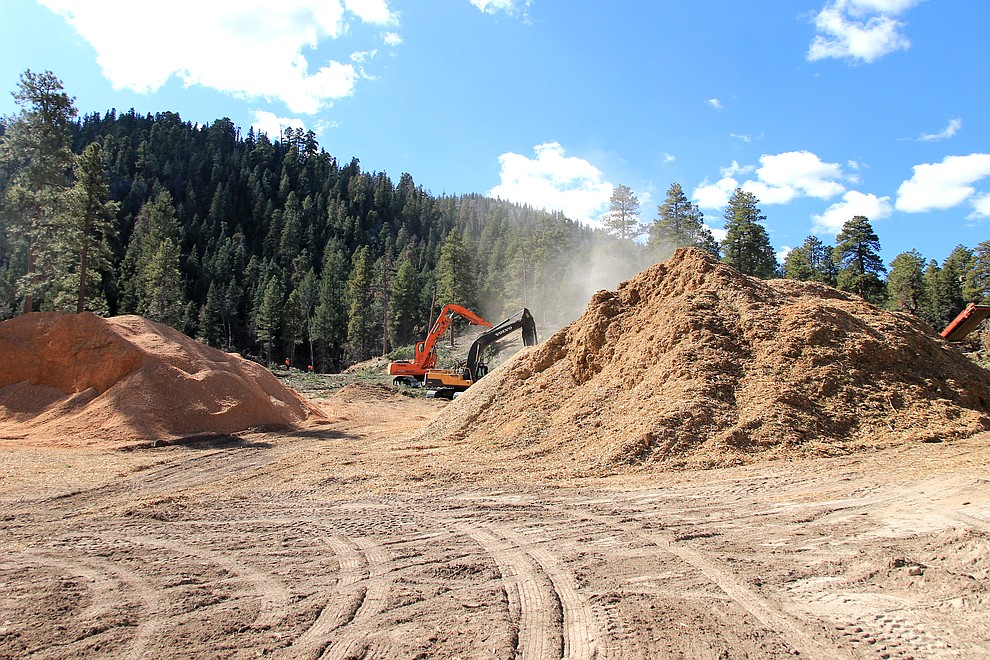 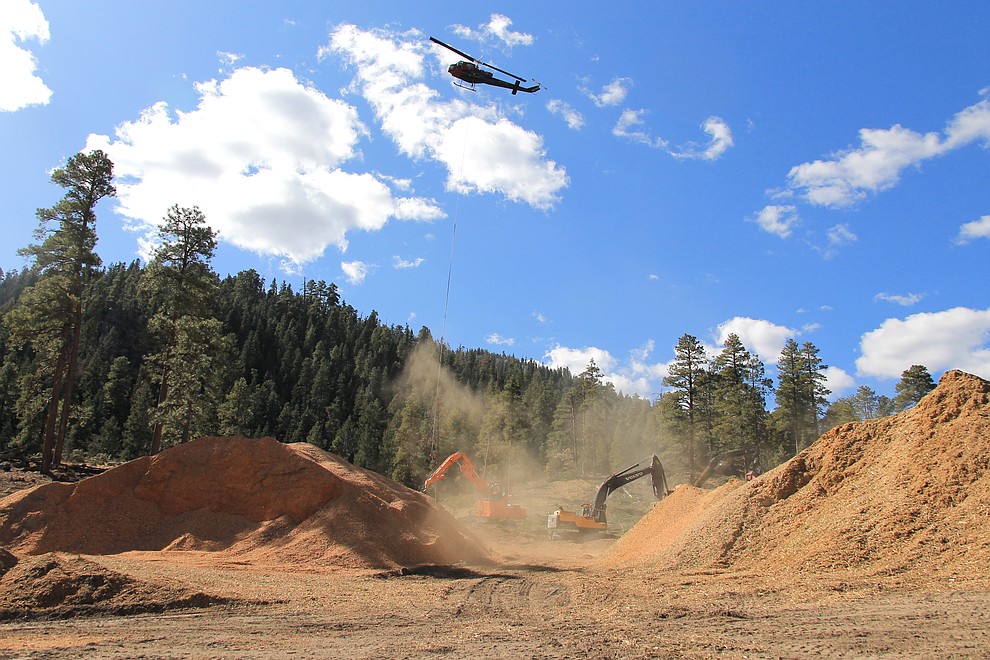 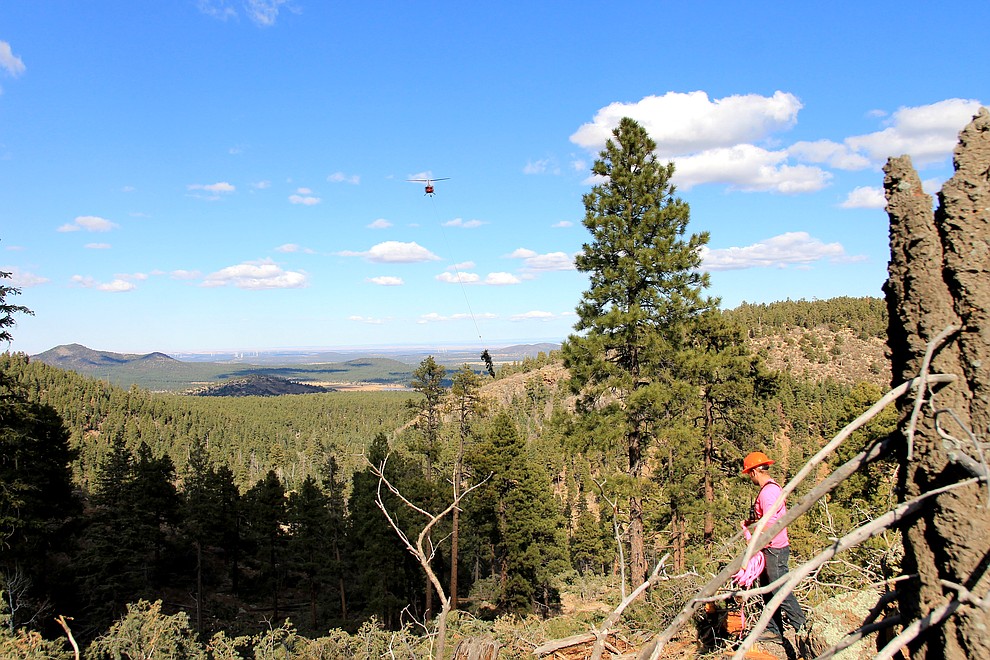 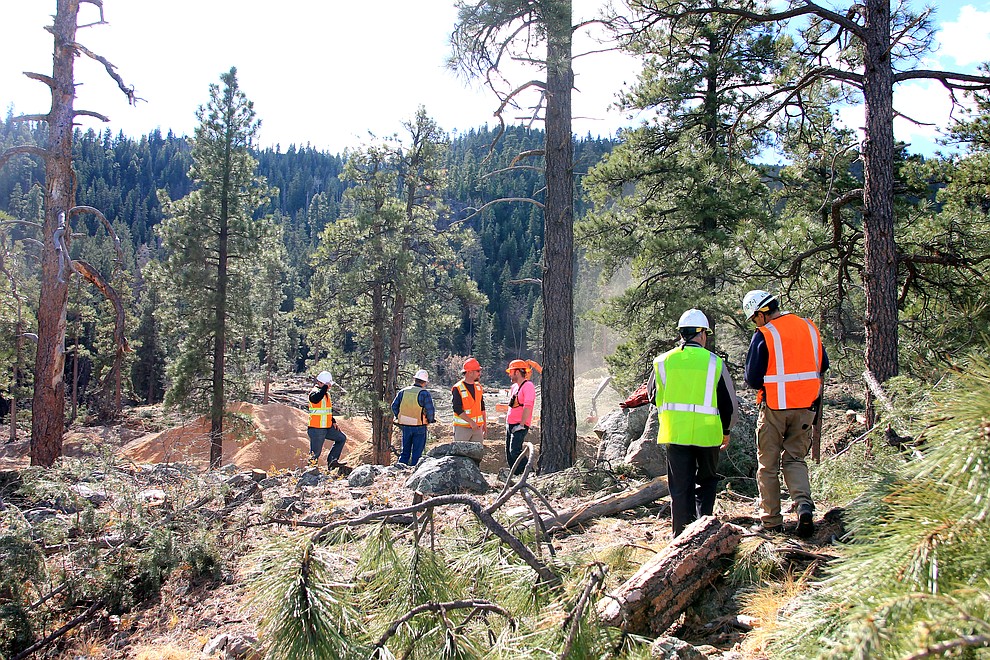 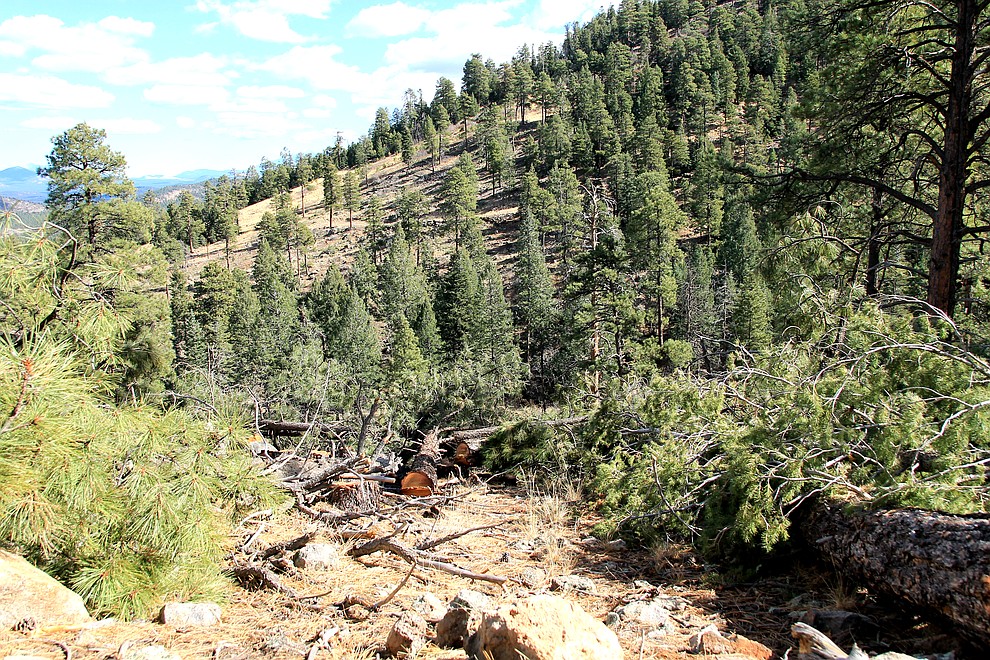 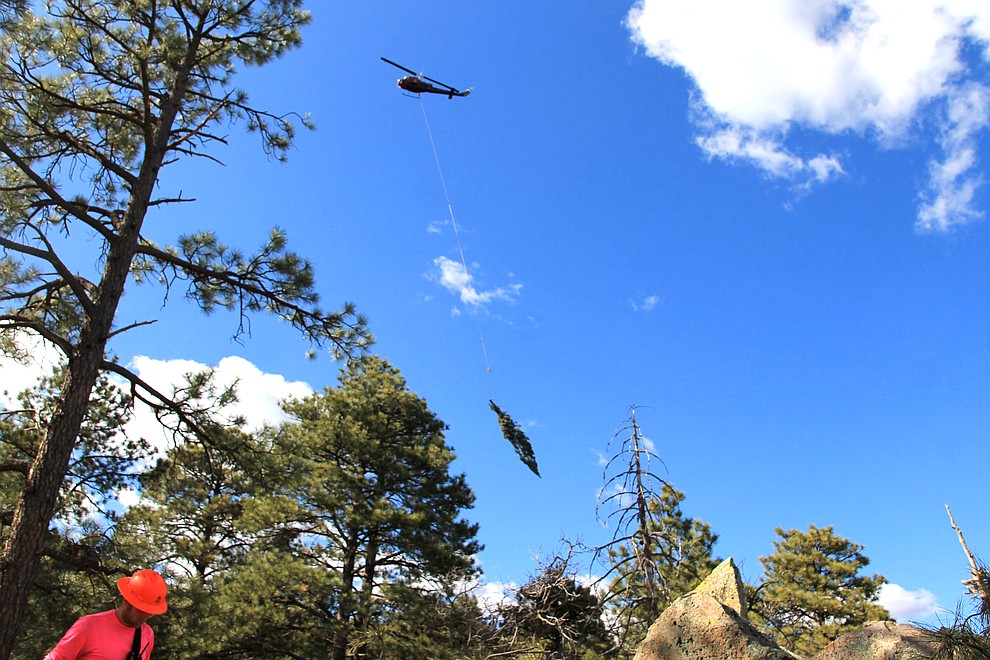 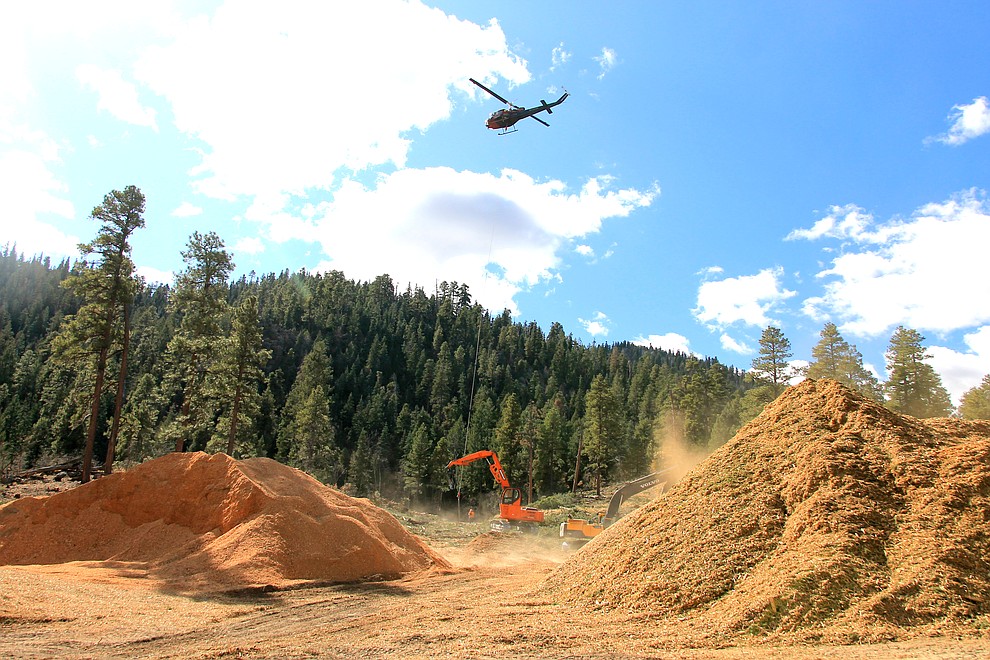 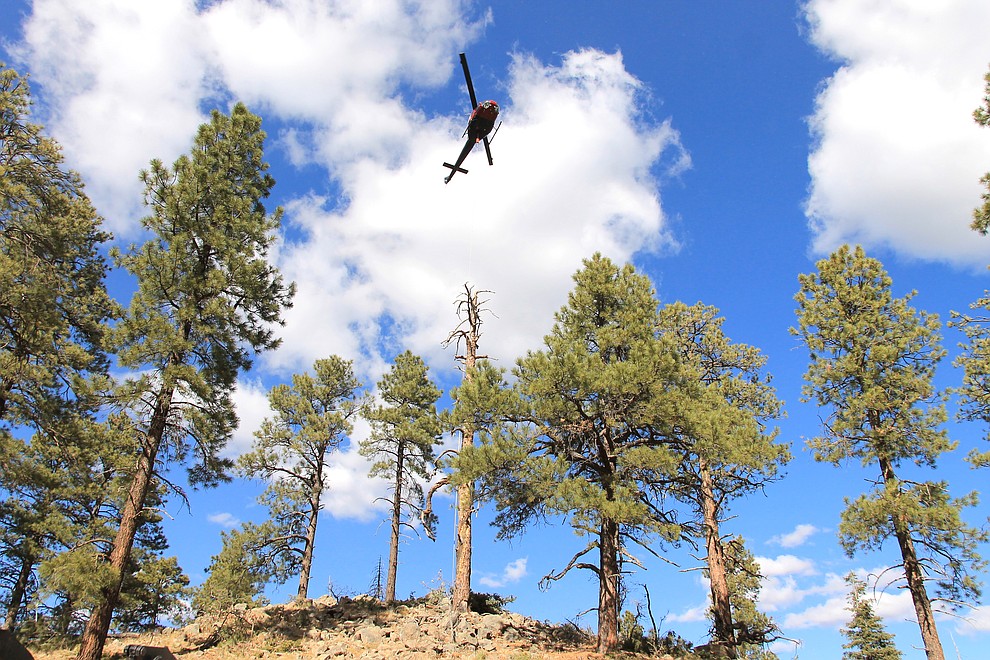 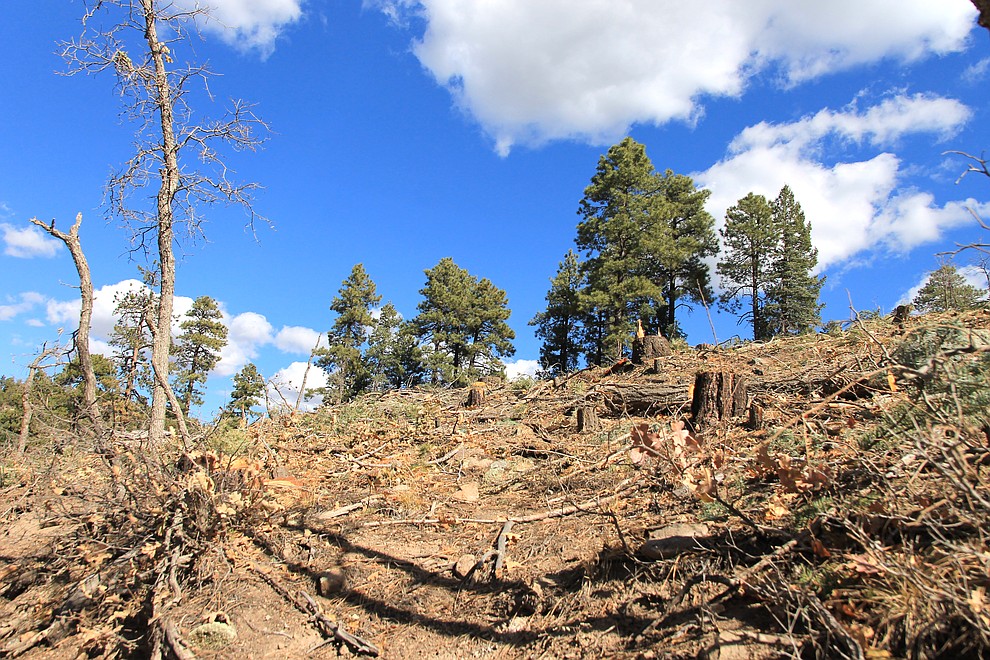 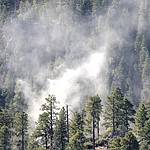 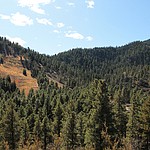 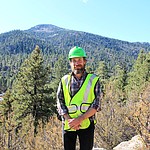 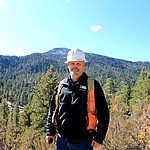 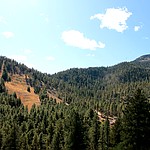 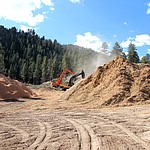 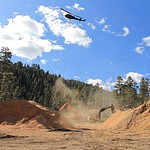 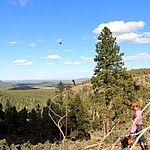 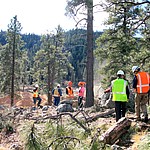 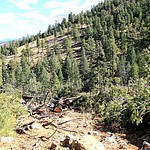 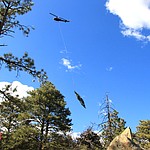 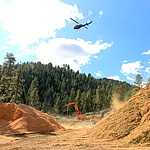 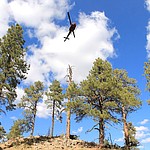 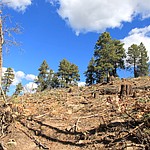 Zebrowski said Markit! commonly contracts with R&R Conners helicopters for steep slope work. The group recently worked with R&R for a project in Colorado and for the Flagstaff Watershed Protection Project.

On Bill Williams, a highly coordinated effort is being made to restore the 300-acres before winter. After the prep work was done, the helicopter began full days hauling the logs off of the mountain to a designated loading site.

The logs are chipped and hauled to Gro-Well Brands, Inc. in Phoenix, and the remaining biomass is ground into piles and transported to Novopower near Snowflake.

Zebrowski said the work is intricate and the company focuses on safety during the project.

“I’m checking the weather every day, especially the wind,” he said. “We have to be nimble and be able to shift gears. Once there is snow on the ground, we are done.”

For the Bill Williams Restoration Project, the National Forest Foundation has worked to bring together funds from multiple contributors that include $1.8 million from the Kaibab National Forest, $800,000 from Coconino County, private funds from the Sperling Foundation and a state grant from the Arizona Department of Water Resources.

“It’s a lot of relationship building,” Plumb said. “The value of the project is in the restored acre. When it costs $6,000 per acre for a helicopter to get the wood out, you are never going to recover that from the value of the timber.”

The Forest Service has determined the 300-acre site is a critical watershed drainage that delivers water supply to the city of Williams. By removing heavy loads of woody material from inaccessible areas, the forest and county hope to reduce the risk of a potentially destructive wildfire that could have devastating effects not only to Williams, but long lasting impacts to other communities to the south also dependent on flows from the mountain.

“The benefit is the costs saved by not having to deal with fire suppression, flooding impacts and restoration,” said Jay Smith, forest restoration director for Coconino County Flood Control District. “The museum fire cost a little over $7,000 an acre to suppress and do the mitigation work. So you take the 300 acres here times $7,000 and you are at $21 million.”

Coconino County said they identified fire and post-wildfire flooding as the number one health and safety threaten to the citizens of the county. The County Flood Control District has invested in the project to help ensure a properly maintained forest for the safety of its citizens and visitors and for the economic prosperity of the area.

“We have worked with the forest service on post wildfire mitigation, but we look at this to see if we can reduce the type of impact from fire and flooding,” said Coconino County Supervisor Matt Ryan. “This is our first step into it. We are trying to come up with creative means to prevent catastrophic wildfires and post wildfire flooding.”

Smith said the cost of wildfire suppression and mitigation is a concern for the county.

“The county has realized that if we continue to have these fires we can’t stay solvent as a flood control district or even as a county,” he said. “The county can’t afford to put out $30 million here and there.”

Plumb said there are about 1,200 acres of steep slope thinning to be done on Bill Williams Mountain.

“There are other acres we are going to get to,” he said. “We are going to work with the forest service to determine what those are. Hopefully next year we will be doing another project — it may or may not be with helicopters.”

Plumb said the National Forest Foundation plans to have the work done by the end of the year.