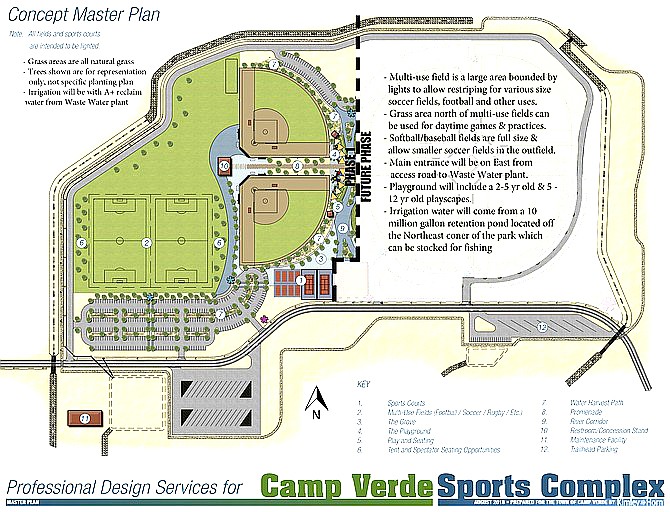 Jan. 15 is the deadline for bids on Phase 1B on the Camp Verde Sports Complex. The complex is located east of the Verde Ranger Station on SR 260. (Concept art courtesy of Verde Independent)

CAMP VERDE, Ariz. — The town of Camp Verde has a Jan. 15 deadline to receive bids on Phase 1B of the new 100-plus acre sports complex, the town’s Parks and Recreation Department has announced.

If all goes as planned, the complex could have two football/soccer fields and one baseball/softball field in use by fall 2020, Town Manager Russ Martin said Nov. 11.

“We want to plant grass in the spring, and we’ll wait until the grass grows before the fields can be used,” Martin said.

According to a news release from Camp Verde Parks and Recreation Manager Michael Marshall, the council could have an opportunity to award the winning bid at its Jan. 22 meeting. Construction, Marshall stated, could begin soon thereafter.

Besides the football/soccer and baseball/softball fields, the town’s current expectations for phase 1B of the complex, located east of the Verde Ranger District on SR 260 are for the fields to be lighted using state-of-the-art LED lighting and for the fields to be constructed with under field drainage, a sand base and full field coverage irrigation that would allow top quality grass and better field playability during monsoon season.

Much of Phase 1A was completed in 2018, work that included a rough grade of the site, as well as drainage and storm water needs, installation of sewer, water and irrigation lines, roads, gates and parking.

Marshall stated that Phase 1B cost about $3.1 million, about $900,000 less than the original engineer’s estimates for this phase.

But bids earlier this year on Phase 1B forced council to reject those bids, and to direct town staff to have the engineer redesign the plans and scope of work.

“Construction continued at the adjacent Town of Camp Verde Water Reuse Facility on upgrades needed to produce the A+ quality water required to irrigate the sports fields,” Marshall said.

Tertiary filtration and ultraviolet disinfection were installed together with monitoring equipment “to ensure that only A+ water is received at the sports complex for sports field irrigation,” Marshall said. “These upgrades involve state of the art technologies to ensure safe and reliable operations for years to come.”

Marshall also said that A+ quality water is already being produced at the water reuse facility.

Bill Helm writes for the Camp Verde Bugle, a sister paper to the Williams-Grand Canyon News