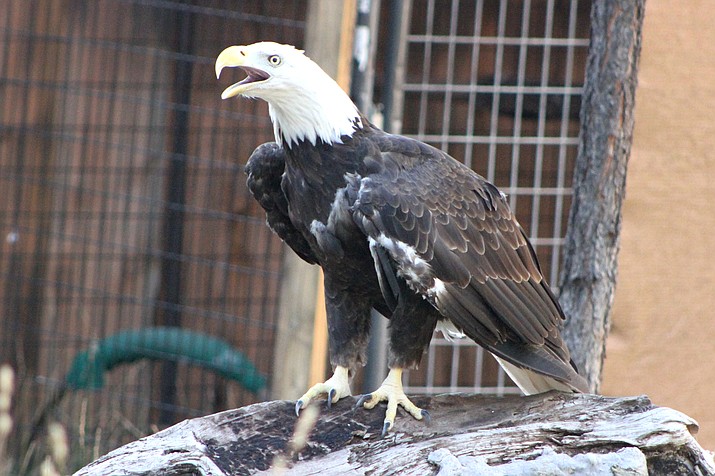 Vernon the Bald Eagle is the newest member of the Bearizona family. Vernon was rescued by the U.S. Fish and Wildlife Service. (Photo/Bearizona)

WILLIAMS, Ariz. — On Nov. 11, in honor of Veterans Day, Bearizona introduced its first bald eagle to the park.

The winning name was chosen out of 850 fan entries and honors George Washington’s Mount Vernon estate. Bearizona stated that the name Vernon is especially fitting since the first president of the United States and Bearizona’s first bald eagle were both from the great state of Virginia.

“Eagles are becoming more common here in Virginia and I see them a couple of times a month. My heart still jumps in excitement when I see one,” said contest winner, Laurinda Bowling of Bland, Virginia.

Vernon was rescued by the U.S. Fish and Wildlife Service after he was seen fighting with another eagle in what was likely a territorial dispute. Vernon suffered injuries affecting his ability to fly and made his way to multiple facilities over the last decade before finding a home at the Bearizona Wildlife Park.

“He’s very shy, but he loosens up after a few fish,” said Susan Davidson, founder of High Country Raptors. “The staff continues to learn more about him and his likes and dislikes every day, and we are doing our very best to keep Vernon feeling as comfortable and safe as possible in his new home.”

Visitors were able to visit Vernon for the first time on Veterans Day.