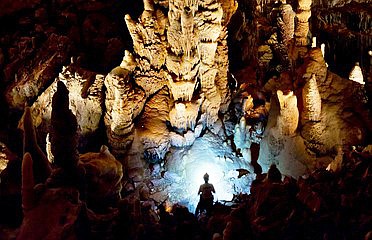 The caves were discovered in 1974 by Gary Tennen and Randy Tuffs and are located in southern Arizona. (Photo/Arizona State Parks and Trails)

PHOENIX – In November 1999, Kartchner Caverns State Park officially opened to the public, offering tours through caves beneath the Whetstone Mountains, camping, and education. On Nov. 16, the public is invited to an all-day event celebrating the 20th anniversary of the park. 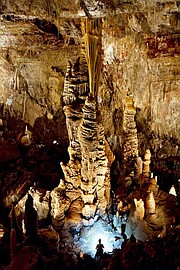 The caves were discovered in 1974 by Gary Tennen and Randy Tuffs and are located in southern Arizona. (Photo/Arizona State Parks and Trails)

The caves were discovered in 1974 by Gary Tennen and Randy Tuffs, who then kept them a secret for more than 10 years as they worked to find a way to conserve and share their amazing find. Trails through the caves were developed and built by hand, using no heavy equipment, to preserve the caves and limit the disruption to the environment. The trails are wheelchair accessible, and the cave is in nearly the same condition today as it was when it was discovered.

“Arizona State Parks and Trails has worked to protect and conserve the caves for 20 years, all while keeping them accessible to visitors,” said Executive Director Bob Broscheid. “With help from our community partners, we’re able to showcase this incredible attraction to more than 125,000 people per year.”

The anniversary celebration will have family-friendly activities all day long, including solar viewing from the Huachuca Astronomy Society, a reptile display, geology activities for kids, and State Parks mascot Rocky Ringtail. Kids can join the Jr. Ranger program and learn about the other state parks, or learn more about what it takes to preserve a special cave like Kartchner Caverns.

A guided hike will be offered at 1 p.m. on the Ocotillo Trail. Rangers will showcase how to use the iNaturalist app to record nature observations on the park. The hike will begin at the group ramada.