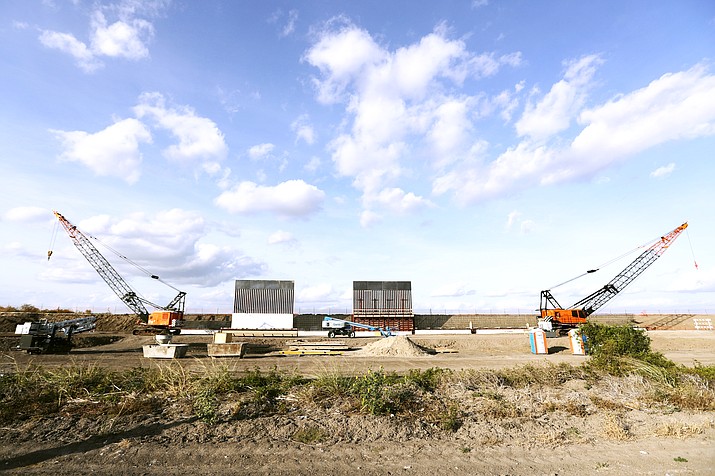 The first panels of levee border wall are seen at a construction site along the U.S.-Mexico border in Donna, Texas Nov. 7. A federal appeals court hears arguments against diverting Pentagon money for border wall construction as time runs out. It says the Trump administration has moved quickly to spend the money after the Supreme Court rejected an emergency appeal to prevent work from starting in July. (AP Photo/Eric Gay, File)

SAN DIEGO (AP) — A federal appeals court heard arguments Nov. 12 on a bid to halt military funding for construction of President Donald Trump's border wall as the pace of construction raises questions about whether time is running out for the administration's critics.

The administration has begun work on 129 miles of Pentagon-funded projects in California, Arizona and New Mexico since the Supreme Court ruled in July that construction can proceed during a legal challenge.

The Pentagon has diverted $6.1 billion to pay for construction since Trump declared a national emergency on the border in February. Trump says he plans to have about 500 miles built by the end of his term in 2020. As of Nov. 1, about 78 miles were completed to replace existing barriers.

Dror Ladin, an attorney for the American Civil Liberties Union, urged a three-judge panel of the U.S. 9th Circuit Court of Appeals in San Francisco to rule as quickly as possible because the administration was moving quickly in places including Organ Pipe National Monument in Arizona. 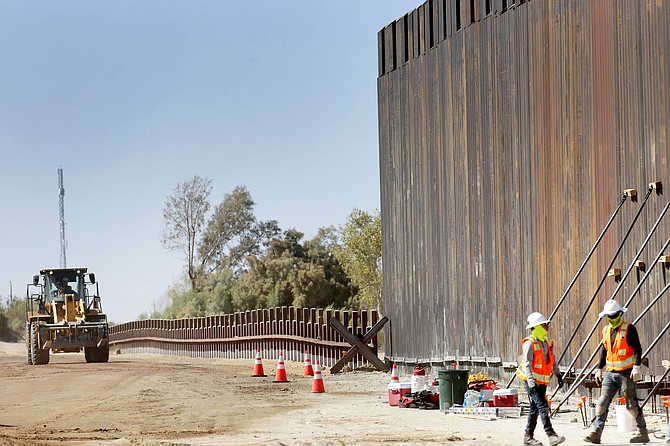 Government contractors erect a section of Pentagon-funded border wall along the Colorado River Sept. 10 in Yuma, Ariz. A federal appeals court hears arguments against diverting Pentagon money for border wall construction as time runs out. It says the Trump administration has moved quickly to spend the money after the Supreme Court rejected an emergency appeal to prevent work from starting in July. (AP Photo/Matt York,File)

He said huge amounts of water are being drawn to build the wall with a great deal of cement.

"There's bulldozers and really heart-wrenching pictures from the border that are being sent to me every day," Ladin said.

Ladin said in an interview that sections of wall in dispute should be torn down if the ACLU prevails.

The judges — two appointed by President Bill Clinton and one by Trump — gave no clues to how they were leaning. They did not say when they will issue a written decision.

The ACLU, which is representing the Sierra Club and the Southern Border Communities Coalition, contends that Trump flagrantly ignored the wishes of Congress. Attorneys for the Justice Department said Trump properly exercised his authority to transfer money between departments.

Attorneys for the state of California and the U.S. House of Representatives appeared before the judges to argue in favor of the ACLU's position.

The president's national emergency spawned several lawsuits, but the case argued Nov. 12 is the most closely watched. Another appeals court panel blocked work on Pentagon-funded projects in California, Arizona and New Mexico but the Supreme Court granted the administration's emergency request to let it proceed. The projects rely on $2.5 billion in Pentagon counterdrug money.

Defense Secretary Mark Esper transferred an additional $3.6 billion designated for military construction in September to pay for about 175 miles of wall in California, Arizona, New Mexico and Texas. The administration and the ACLU are scheduled to argue before a federal judge in Oakland, California, next week over whether those projects should also be stopped.

As it seeks to accelerate construction, the administration faces a potentially thorny problem in Texas because much of the land is privately owned and must be purchased, potentially by confiscation.

Construction on private property depends on when agreements are struck with landowners, said Randy Roberts, a real estate specialist for the U.S. Army Corps of Engineers. That includes a 52-mile project in Laredo, Texas, that is estimated to cost $1.3 billion, the longest and most expensive in Trump's presidency. The government has had little experience working with landowners in that area.

Trump inherited barriers covering 654 miles, or about one-third of the border. Much of it was built during George W. Bush's presidency.