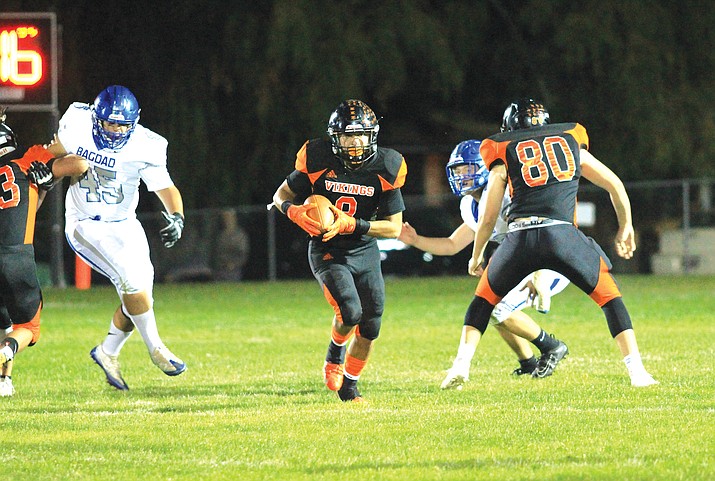 Following their victory Nov. 8, the Williams Vikings will return to the 1A State Championship at Coronado High School in Scottsdale at 6 p.m. Nov. 16. (Wendy Howell/WGCN)

WILLIAMS, Ariz. — The Williams Vikings are packing their bags for a return trip to the 1A State championship game after rolling over Hayden in a semifinal game, 52-0, Nov. 8.

The Vikings are headed to the championship game ranked No. 1 in the 1A conference with only one loss in the season to Nevada powerhouse Pahranagat Valley early in the year.

In the semifinal game, the Vikings struggled to keep the ball off the ground early, but managed to get on the board in the first quarter with a 61-yard Kolby Payne run.

The Vikings found their footing in the second quarter as the team saw Chance Pearson and Alex Garrett run in two touchdowns followed by David Lozano kicks to move the Vikings up 20-0.

A Payne-Lozano 50-yard pass and a 61-yard Garrett run brought in two more touchdowns and the Vikings left the half leading 35-0.

After the half, the Vikings had a long drive and Pearson pushed the ball in for another touchdown. Lozano then made an interception that lead to a Drew Logan touchdown. Lozano made his first field goal of the season to leave the final score at 52-0.

Pearson and Garret each rushed for 119 yards, and Payne rushed for 93. Payne completed 6 for 8 on passing, but had three fumbles.

Lozano had six kicks for 305 yards, averaging 51 yards. His longest was 60 yards, and he had one touchback. He also went 5 for 5 on PATs.

The Vikings face Superior at the 1A State championship game at Coronado High School in Scottsdale at 6 p.m. Nov. 16