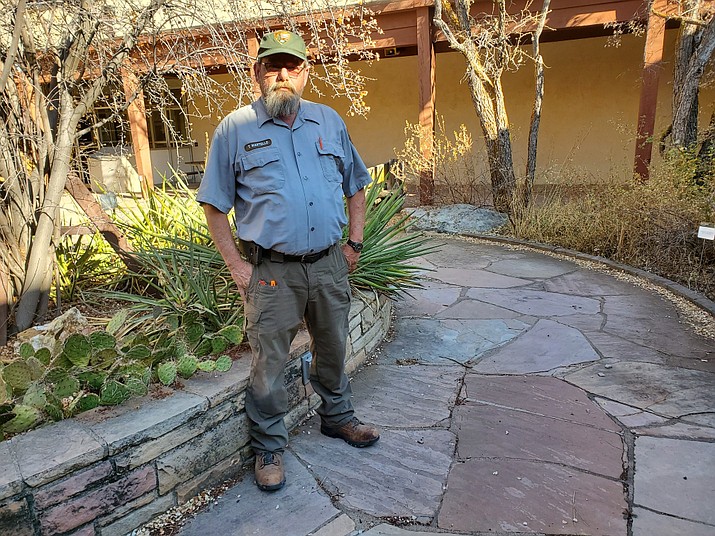 Ted Martello, maintenance lead for Albright Training Center, served two combat tours in Iraq — one when he was fresh out of high school and another after he turned 40. (Erin Ford/WGCN)

During the month of November, the Grand Canyon News honors local veterans by sharing their stories and extending our thanks for their service. See upcoming issues for more profiles or go online at www.grandcanyonnews.com.

GRAND CANYON, Ariz. — Like many new recruits, Ted Martello signed up for military duty soon after graduation from high school. Several members of his family served, including his grandfather in World War II, an uncle who served in Vietnam and another uncle who was a member of the California National Guard. Although he didn't grow up hearing stories of glory and comraderie, Martello said he decided he would serve as well.

"I just decided when I was in high school that after I graduated, I was going to join the military," he said.

Always good with his hands, Martello served his first tour of duty from 1984-1988 as a track mechanic stationed in Germany and Fort Sill, working on M1 Abrams tanks and M2 Bradley armored infantry vehicles.

After leaving the Army after his first tour, Martello answered the call again in 2006, when he was 40-years-old.

"I read in a newspaper that they had just raised the enlistement age," he said. "I just turned 40, so I thought 'What the heck, I'll try it.'"

After his first four years of service, Martello held a variety of jobs, including an auto parts salesman, a paramedic and a glazier (glass repair).

Martello's son had left the military just a year before his father re-enlisted and had also been deployed to Iraq.

After re-enlisting, Martello was deployed to Iraq twice in six years, this time as a truck driver, hauling a new class of bomb-proof MRAP vehicles in convoys along the combat zone.

Although driving a truck may not seem like the most harrowing job in the military, it can be one of the most dangerous.

According to retired Air Force General Wald, who authored a report on military convoy security in 2008, nearly 50 percent of all American casualties in Iraq and 40 percent in Afghanistan were sustained during convoy travel. Those numbers have climbed in the decade since.

Martello, who drove the lead truck about 100 yards in front of the rest of the convoy, said his vehicle was struck by two Improvised Explosive Devices (IEDs).

"We drove at night, so we were all lit up and they could see us from miles away," he said. "I got hit twice on the same stretch of road."

His combat experiences, and those of his son, left them both suffering from post-traumatic stress disorder (PTSD).

Because of his experiences, Martello reached out to other disabled veterans via non-profit organizations and even just listening to their experiences and letting them know they were not alone.

Because of his unique career path, Martello said he's able to relate to both older and younger generations of those who have served.

"A Vietnam vet helped me out the most when I was having my problems," he said. "My son couldn't talk to anyone, but he came to me, not just because I'm his dad but because I know what he's been through."

Martello has worked with numerous veterans groups, helping them find jobs and even housing.

His latest work is with the Nation of Patriots, which raises money through a cross-country motorcycle ride to help veterans in each state. He's also been involved with the Navajo-Hopi Honor Riders, which escorts funeral processions for Navajo and Hopi veterans to their final resting places.

After his second tour, Martello said no to a third.

"They asked me to come back and I said I didn't like my odds," he said.

He was working as a traffic controller for the Arizona Department of Transportation in Flagstaff when a Veterans Affairs representative told him about the lead maintenance position at Albright Training Center, which required applicants be disabled veterans.

Martello said he loves his job at the Grand Canyon, in part because his boss is former military himself and can relate to him on that level.

"I found that when I moved up here in 2012, that just the scenery helped with my PTSD," he explained. "I was living in Bullhead City and being down there looked just like being back over there, (in Iraq) with the desert."

While his service still lingers with him in the form of PTSD, Martello said meeting many different people while he served has stuck with him the most. He communicates with them often via social media and meets with them when he can.