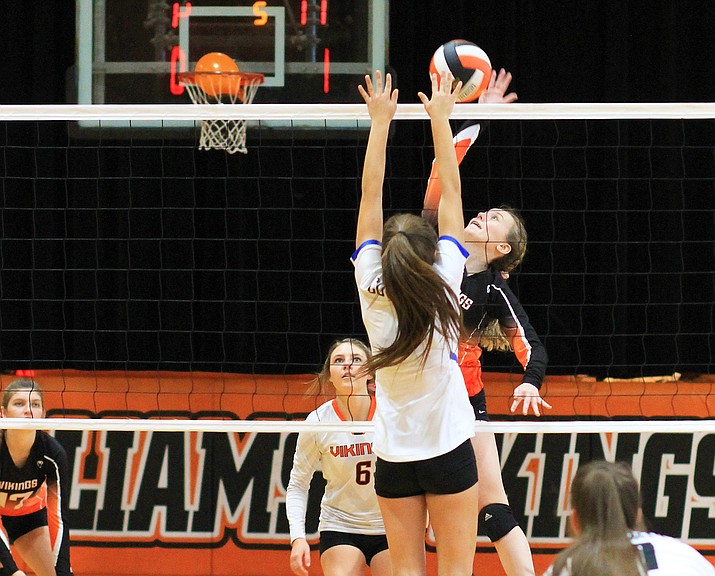 Ashlynn Kennelly battles a player at the net in an earlier season game. (Wendy Howell/WGCN)

WILLIAMS, Ariz. — Although the Lady Vikings didn’t make it as far as they hoped in the 1A State tournament Nov. 8-9, the team made history by reaching the semifinals for the first time in Viking’s history.

The team went into the tournament ranked third behind St. David and Mogollon.

Coach Connie Stevens said it was disappointing that the Vikings did not make the championship game, but was proud of their accomplishments over the season.

“We could have given them a better game, it should have been closer,” Stevens said.

Stevens said she felt the Vikings were holding back and could have been a contender for either Mogollon or St. David in the finals.

“It was David and Goliath,” Stevens said. “I really have to work on my offense to move away from the blockers. We have to pass well, we’re a strong passing team.”

Stevens said the height disadvantage is always tough on the Vikings, but the Vikings offense typically adjusts to the difference.

“We could not get our passes going in the game though,” she said. “Our setters had to work extra hard to get it into the setting zone and get it to the hitters.”

Stevens said she was proud of the work the girls put into the season and into their off-season club team. She said the team was in their best form against Mayer in the quarterfinals.

“We were awesome the night before,” she said. “I knew we had a shot at the finals. We played well on Friday and I felt so good going into the game.”

Despite losing five seniors, four of which are starters, Stevens is encouraged for next year.

“I’m still going to be strong,” she said. “I’m expecting to be right there next year.”

The team’s only regular season losses were to Mogollon, Thunderbird and St. David.