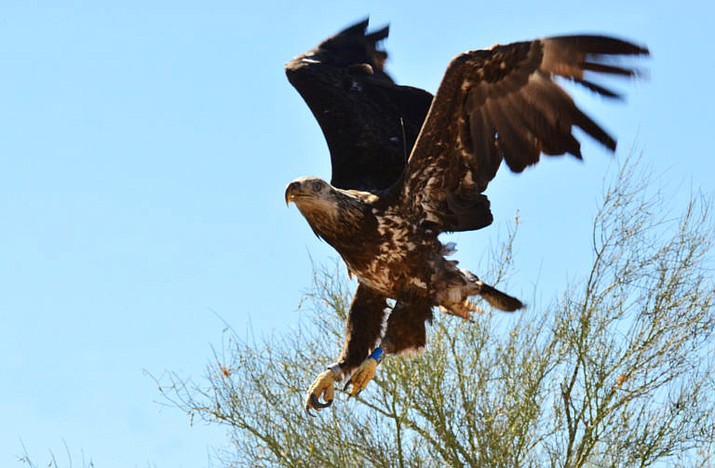 A juvenile bald eagle flies away after being released at Horeshoe Lake in June 2019. (Photo/AZGFD)

State Game and Fish Department officials say there were 71 eagle nestlings during the 2019 breeding season, down from 87 hatched last year.

During the department’s annual bald eagle survey, raptor biologists counted a minimum of 74 occupied breeding areas statewide — up from the 69 counted last year.

But the number of eggs laid dipped from 102 last year to 97 this year.

The number of birds that made their first flight fell to 63 from the 70 recorded in 2018.

Arizona’s bald eagle population has flourished since 1978, when 11 pairs were counted within the state and the species was listed as endangered.

There currently are an estimated 74 adult breeding pairs.

More information on bald eagles in Arizona is available at www.azgfd.gov (click on “wildlife”) or www.swbemc.org.

To learn more about how AZGFD works to conserve and protect the state’s wildlife visit www.azgfd.gov. To provide a contribution to support the department’s on-the-ground conservation efforts, visit www.azwildlifehero.com.