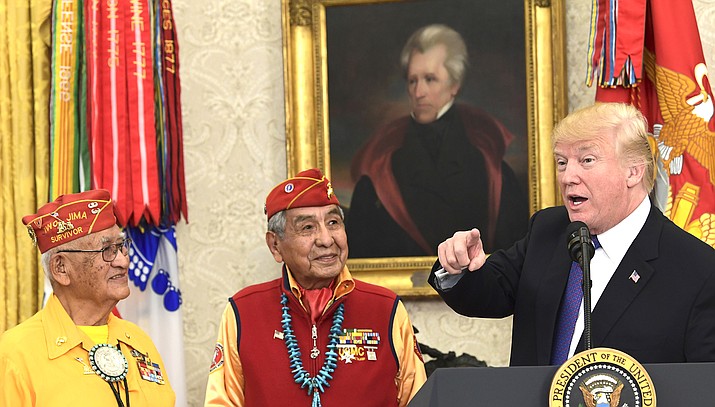 President Donald Trump, right, speaks during a meeting with Navajo Code Talkers including Thomas Begay, left, and Peter MacDonald, center, in the Oval Office of the White House in Washington Nov. 27, 2017. Trump has declared November as a time to celebrate both Native American heritage and the country's founders, a move that upset Native Americans who have historically had the month to themselves to mark their contributions to the nation. (AP Photo/Susan Walsh)

FLAGSTAFF, Ariz. (AP) — President Donald Trump has declared November as a time to celebrate both Native American heritage and the country's founders, a move that upset Native Americans who have historically had the month to themselves to mark their contributions to the nation.

Trump unveiled his National American History and Founders Month proclamation to coincide with a National Native American Heritage Month declaration that every U.S. president has made since 1990.

Native Americans believe the founders proclamation diminishes the importance of the time set aside to honor them. They say their ancestors were oppressed and killed by soldiers and settlers at the time the country was being founded, and that the nation regularly celebrates the founding fathers with holidays such as Presidents' Day and the Fourth of July.

The White House did not respond to a request for comment.

The proclamation is part of a push by Jennifer and Jack London, Republican donors who run the National American History and Founders Month Organization in Virginia. Jennifer London said more than 15 states have issued similar proclamations, and she praised Trump for doing the same on the federal level.

She said she chose November because it encompasses the celebration of Native American heritage, Veterans Day, Thanksgiving and the traditional school year.

"There are two ways of looking at our relationship with Native Americans, they actually were allies at times in our history, and that's something, again, that Americans should be educated about," she said.

She said the couple also has donated to groups for veterans and those that support American history.

The proclamation follows three years of tense relations between Native Americans and Trump.

In his proclamation, Trump pointed to public safety listening sessions in Indian Country and efforts to reduce drugs and violence in tribal communities as progress. He also highlighted the administration's efforts to secure Native Americans' remains and artifacts that had been in a collection in Finland and return them to tribes near Mesa Verde National Park in the Southwest.

Nathan Wright, who is Sioux, said he's hopeful more Americans will seek to understand treaties with tribes and the Native American worldview as caretakers of the land and water with a responsibility to pray for everyone.

"It's something we inherit, and some of our teachings go way back," said Wright, who is among Native Americans who have served in the military at a higher rate per capita than other minority groups. Native American code talkers also were credited with helping the U.S. win World War II.

Both proclamations were published in the Federal Register on Tuesday. The National Native American Heritage month proclamation wasn't immediately posted on the White House website after it was issued last week, leading some Native Americans to believe that tradition had changed.

Trump has signed proclamations honoring Native Americans in November since he took office, and it's become an expectation.

"It speaks to a level of diplomacy, a diplomatic sort of relationship, that special relationship we have with the federal government," said Jacqueline Keeler, a Navajo and Dakota writer.

In the proclamation for National American History and Founders Month, Trump called on Americans to "develop a deeper understanding of our American story" by studying founding documents and exploring history.

Robert Stockdale, of Knoxville, Tennessee, said the focus in November should be on honoring Native American heritage. A better fit to celebrate the founders and the signing of the Declaration of Independence would be July, when a day already is set aside, he said.

"It would seem to me if you want to make an educational opportunity, that's the perfect time," he said.