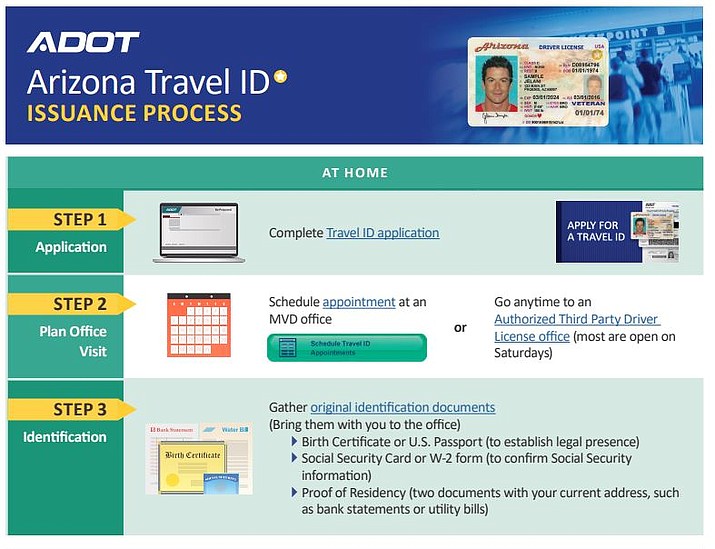 Effective October 1, 2020, only the Arizona Travel ID (driver license or ID card), a U.S. passport and other federally approved identification will be accepted at TSA airport security checkpoints for domestic travel. (ADOT/image)

PHOENIX – More Arizonans are getting the AZ Travel ID than ever before.

Data released by the Arizona Department of Transportation Motor Vehicle Division show that the number of the federally-compliant AZ Travel IDs issued at MVD and Authorized Third Party offices has jumped considerably, from less than 20 percent in January to 65 percent now.

“An increase of 45 percent in less than a year is a testament to customer service professionals doing an excellent job,” said MVD Director Eric Jorgensen. “But our message is still, ‘Will your license fly?’”

“Arizonans who don’t have the AZ Travel ID risk being stopped at TSA airport checkpoints when new federal ID rules take effect on October 1, 2020,” he added. “On that date, the federal government has made it clear that anyone without a federally-compliant ID will not pass through TSA checkpoints and could miss their flight. In addition, MVD and Authorized Third Party providers want to avoid a rush of customers as the deadline gets closer.”

The AZ Travel ID meets the requirements of the 2005 federal REAL ID Act. The law requires people to provide documentation such as an original birth certificate or valid Passport to prove identification; proof of Social Security number (including all nine digits), and two pieces of documentation such as a utility bill, rental agreement or similar paperwork that shows a person’s physical address (not a P.O. Box).

Customers are encouraged to start the documentation process at aztravelid.com and may schedule an appointment at an MVD location through ServiceArizona.com, though walk-ins are also welcome. Many Authorized Third Party locations provide driver license services including the Travel ID. Information on those locations is also available at ServiceArizona.com .

Jorgensen concluded, “We know some people rarely, if ever, plan to travel by air, but it’s still important to think about getting the AZ Travel ID anyway. Unexpected events requiring air travel can occur and having the AZ Travel ID is the most efficient and cost-effective solution.”

Information and image provided by the Arizona Department of Transportation.