Win by win, Suns crawling out of Western Conference basement 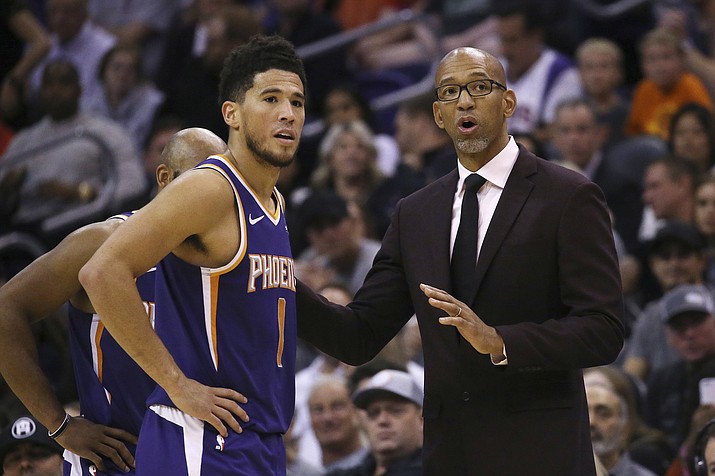 PHOENIX — First-year Phoenix coach Monty Williams is the epitome of stoic, with a coaching and news conference demeanor that ranges from subdued to serious to slightly bemused. He preaches consistency from day to day and month to month, painstakingly discussing how he plans to build this program the right way.

So in the aftermath of Monday's thrilling 114-109 win over the previously undefeated Philadelphia 76ers, the 48-year-old was trying to stay grounded, launching into another answer about how his team had to stay steady and improve each day.

Then something weird happened: The facade cracked.

Even Williams had to acknowledge this winning run of basketball was pretty darn cool.

"This is a huge win," Williams said. "This is great for the fans, it's great for our city."

Two weeks into the season, Phoenix (5-2) is one of the NBA's surprise stories, beating some of the league's top teams like the 76ers and Los Angeles Clippers after finishing last season with a 19-63 record.

The Suns have had their great start despite losing starting center Deandre Ayton after the season opener to a 25-game suspension for violating the terms of the NBA/NBPA Anti-Drug Program after testing positive for a diuretic.

Rubio and Kaminsky were free agent signings during the offseason. Oubre, Saric, Baynes and Johnson came to Phoenix in trades over the past year.

It's not exactly a cast of household names. But much like their coach — who carved out a nine-year NBA playing career largely thanks to defense, grit and hustle — the Suns have quickly built a hard-nosed reputation.

The 32-year-old Baynes typifies the team's surge, playing the best basketball of his career while playing big minutes in Ayton's absence. The 6-foot-10, 260-pound Australian has been a valuable role player for good teams like the Boston Celtics and San Antonio Spurs, but now he's averaging 15 points per game, which is nearly 10 points more than his career average.

His added offensive pop, along with his usual defense and rebounding, have been invaluable.

"How could it not be fun?" Baynes said. "It's fun for everyone here involved. That's one of the good feelings we have right now. We understand that when we're playing within the system, the ball's moving and everyone is getting shots and we're taking the best shots for the team, that's when it's fun."

Baynes is enjoying his newfound scoring touch, but Williams loves his presence on the team because of his commitment to the defensive end. His wide body and bright red beard are unmistakable on the floor, and his constant communication and hustle are an extension of the principles the coaching staff preaches.

Near the end of the 76ers game, Baynes blocked a Tobias Harris shot in the lane and then played tight defense on Harris' missed 3-point attempt from the corner to help seal the win.

"He's the anchor of our defense right now," Williams said. "He's talking. The blocked shot he had was tremendous. He's always on the boards and even when he doesn't get the rebound, he's so big he clears out two or three guys."

It remains to be seen whether the Suns' success is sustainable.

Five more games in the current homestand, including games against the Heat, Nets, Lakers, Hawks and Celtics, should reveal more about this team's true potential.

But Booker is among those appreciating the moment. The fifth-year guard did a lot of losing in Phoenix during his first four seasons — the franchise had an 87-241 record to be exact — so the newfound relevance is refreshing.

"I think we compete with every team, every night," Booker said. "We haven't had an easy schedule to start the season. Some good teams have come through here. We've showed that we're battle-tested and we can play with anybody if we're doing what we need to do."