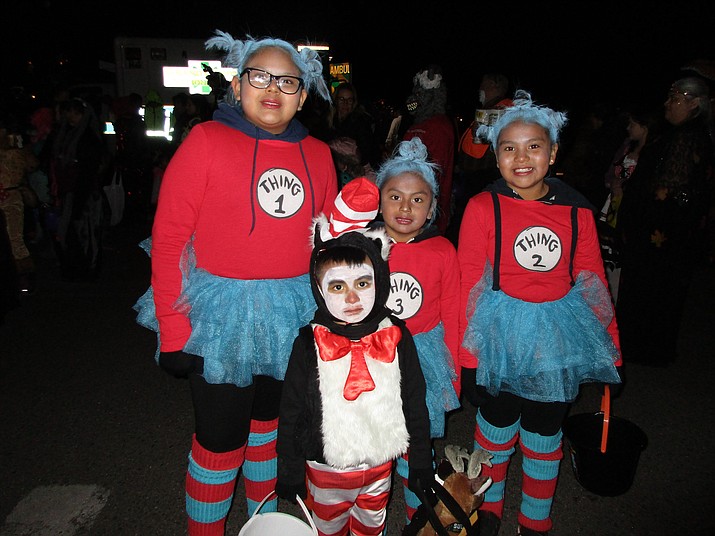 All ages arrived decked out in hopes of winning the costume contest, including Dr. Suess' Cat in the Hat characters. (Abigail Kessler/WGCN)

In Grand Canyon Village, the community recreation center hosted several parties, while the high school held a carnival, in part to raise money for different sports and clubs.

On the day itself, families braved the cold to attend a long-running tradition, Tusayan’s Trunk or Treat. No one knows exactly how long the trunk or treat has been going on, but they all agree it's been a while – at least a decade, according to Grand Canyon Chamber and Visitor’s Bureau Manager Laura Chastain.

One thing everyone can agree on is that the celebration gets bigger and better each time.

This year, was colder than usual, but with the help of a few bonfires managed by the Tusayan Fire Department (TFD), the event was still busy, filled with noise and light. The usually empty parking lot between Wendy's and Imax Theater was bordered by decorated cars, which were visited by families in a variety of costumes. Nearly all vehicles present were put together by local businesses. Those in attendance included the National Park Service, several Tusayan hotels and even a spookily lit Pink Jeep.

This year saw a record number of groups sign up beforehand. Some even set up the day before. The event is a big deal in Tusayan, one of the biggest celebration in town, second only to the Fourth of July display.

“Clearly [this was put together] for the community,” said TFD Fire Chief Greg Brush. “It’s just a real tradition...I remember years ago, people would all run up to the neighborhood in the Park... and now, you know, a lot of those people are coming down here because it’s more fun than just going door to door.”

The event, originally started as a fun time for local families. At the time, Grand Canyon School was not doing many Halloween events, and, because the area is so remote, there wasn’t a lot to do for Halloween. Even though the school has started doing more in recent years (such as last week’s carnival), the event is still going strong. It’s a good time for locals and visitors alike.

The centerpiece of the event was a costume contest. Everyone gathered around the fire truck display to watch as prizes were awarded. A bag of treats was given to scariest and most creative costumes in each age group, ranging from toddlers to adults. There was also a group costume category and two for decorated trucks – the judge's choice went to a disco-themed display run by Clarinda and John Vail. The judges were won over by the festive atmosphere created by its music: kids were dancing along throughout the event. The prize for best community trunk went to Delaware North’s Yavapai Lodge, which had decorated a delivery truck as a cemetery, complete with fog machine.