Never stop learning: Harry Robertson on life as an aviator, inventor and teacher (Part I)
Harry Robertson lives a quiet ranching life, but the man is behind one of the greatest advancements in aviation safety 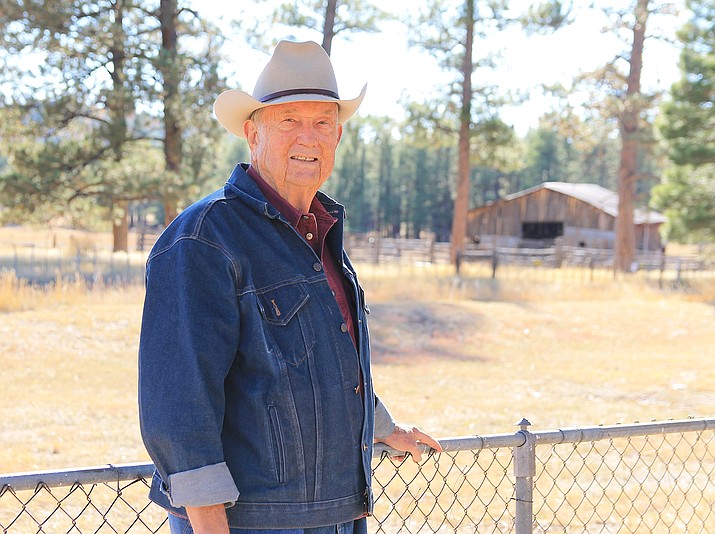 Harry Robertson looks out over his pastures at Pine Springs Ranch in Williams Oct. 18. Although retired as an aviation safety specialist, Robertson continues to advise and inspire those in his field. (Wendy Howell/WGCN)

WILLIAMS, Ariz. — When Harry Robertson started tinkering around with model airplanes as a child, little did he know he would end up inventing aviation fuel systems that have saved over 8,000 lives and are used in aircraft around the world.

Today, the 85-year-old inventor, engineer and part-time Williams resident has his name in the Aviation Hall of Fame and holds numerous patents on items he has invented for aviation safety. His company, Robertson Fuel Systems in Tempe, Arizona., provides crashworthy fuel tanks for commercial, business and military airborne applications and Robertson is the pioneer behind the idea.

When he was just four years old, Robertson got an inkling of interest in aviation when he saw model airplanes at his uncle’s home in Williams. Shortly after, Robertson received his first pocket knife and began carving his own model airplanes.

“There were some antlers on the wall and hanging from each antler were little scale models my uncle built and entered into a contest,” Robertson said. “They would let me look at them, but not touch them.”

All in the family

Robertson comes from a long line of entrepreneurs, engineers and aviators. He is a descendant of William and Frank Robertson, who ran Robertson Aviation Corporation, a post-World War I aviation service that employed Charles Lindbergh as its chief pilot for contract air mail service. The company also had passenger air service, gave flying lessons and performed exhibition flights, and resold surplus military aircraft.

Robertson’s paternal grandfather moved to Phoenix as a young man and was instrumental in the photo engraving business, printing photographs in newspapers and conducting business with the Times Mirror in Los Angeles and the Arizona Republic in Phoenix.

“My father grew up running the presses, running the cameras, printing machines — he was also involved with the start-up of Arizona Highways magazine with (Barry) Goldwater,” Robertson said. 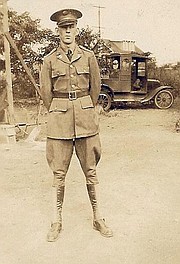 Harry Robertson’s mother, Doris Duffield, grew up in Williams along with her five brothers and sisters. Their father was Elmer Harrison Duffield, a descendant of former U.S. presidents Williams Henry Harrison and Benjamin Harrison, who made a name for himself in the Williams railroad industry.

“My grandfather came west when he was 16 years old as a teletype operator for the Atlantic Pacific Railroad,” Robertson said. “When he died he was in charge of a portion of the Santa Fe from New Mexico to the Pacific Ocean.”

Robertson said the creativeness and entrepreneurial push he and his brothers acquired was inherited from his parents and grandparents.

After Robertson’s father took over the photo engraving business, Harry was put to work alongside him to keep out of trouble at school.

“A lot of my buddies felt sorry for me because I had to go to work and they all got to play football and do all these things,” he said. “But that’s not how I felt, I could hardly wait to go. I could learn stuff and I wanted to know how to work the cameras and printing presses.”

In his spare time as a child, Robertson spent time reading and figuring out how things work. He read encyclopedias, technical books and model-airplane magazines.

“I was reading all the time,” Robertson said. “I read legends people had written — I started reading about Leonardo DaVinci when I was 10 or 11. I realized you could go there (space) and I thought maybe there was a way I could go there sometime.” 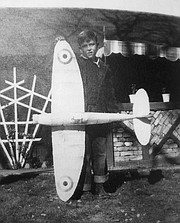 When Robertson was seven, he began building model airplanes and wire puzzles.

"Understanding how the mechanics worked in those puzzles were very helpful in my success with fuel systems," he said. "Those valves and fittings and the way they work are intricate."

He and his brother, Jerry, began flying model airplanes in competitions and their success allowed them to travel across the western U.S.

"I was 17 when I flew in the National Model Airplane Championships and one of them was where you threw a glider and I beat everyone in the U.S," he said. "I still have the trophy."

Through connections of his father, Robertson was given his first airplane flight when he was 10 years old in a Stinson Voyager. That experience was so thrilling, Robertson remembers it to this day.

Robertson took that experience and he enrolled in Phoenix Flying School to learn how to fly. He eventually received his private pilot license as an Air Force pilot in Texas. 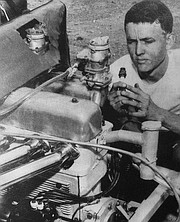 Harry Robertson works on a T-bucket race car he built and drove in 1956 for the national speed record for four-cylinder engine dragsters. (Photo/Harry Robertson)

In addition to aviation, Robertson garnered an interest in auto racing. He and his father would go to a quarter-mile racetrack on Thomas Road to watch future Indy drivers.

Always up for a challenge, Robertson honed his mechanical skills in junior high as he began to make parts for various race cars. As a high school student, he began to build racing engines and worked on several Indianapolis racing cars in Phoenix.

He then took those skills and designed and built his own dragster, from design to finish. He used assorted aircraft and auto parts and even designed his own components. He eventually held the national speed record for four-cylinder engine drag-racing from 1954-1961.

As Robertson continued developing his mechanical skills in high school, he began to consider plans for after graduation. With little financial resources, he contacted Embry-Riddle School of Aviation in Florida when he was a sophomore.

He found a work-study program and thought his plans were made, however, Robertson’s father had other plans. He wanted Robertson to go to Arizona State College (University). He knew Robertson wanted to fly, but he also wanted him to understand business and have a general education.

Hoping to work on an engineering degree, Robertson instead studied mechanical technology at the university and continued taking courses in business as well.

As a college student, Robertson also enrolled in the Air Force Reserve Officer Training Corps hoping to begin a career in aviation. He said he wanted to fly jets, like most teenage kid’s dream about, but was also interested in designing, testing and studying them.

Robertson joined the Air Force upon graduation from ASC in May 1956 and reported to pilot training that winter.