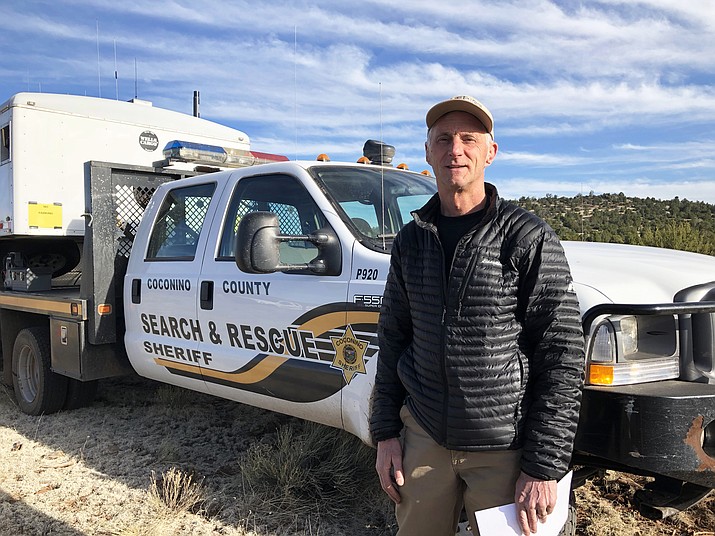 WILLIAMS, Ariz. —The search and rescue unit with Coconino County Sheriff’s Office had a busy week, responding to four incidents in seven days.

On the morning of Oct. 23, Coconino County SAR was requested to assist with the search for a 22-year-old man from Georgia. The man had called his girlfriend and stated that he had been involved in a vehicle accident in the area of Welch Road, west of Williams. The man had reportedly been wandering in the woods trying to find a road.

The man, Matthew Pearce, was fleeing Georgia after a probation violation warrant had been issued for his arrest. SAR assisted in coordinating the search for Pearce using deputies from both Coconino and Yavapai counties, small unmanned aerial systems (drones), the Arizona DPS Air Rescue Unit and SAR volunteers from Coconino County.

The search was conducted on foot, via horseback and with search dogs. Pearce was located in good condition, three days later, on the morning of Oct. 26. He was taken into custody for his arrest warrant and booked into Coconino County Sheriff’s Office Detention Facility in Flagstaff.

On Oct. 23 around 3:20 p.m. SAR responded with Summit Fire District and Guardian Medical Transport to an injured hiker at approximately 11,000 feet elevation on the Humphrey’s Peak Trail near Flagstaff.

Responders were assisted by Arizona Snowbowl personnel and their UTV to transport rescuers.

The 57-year-old female, from California, was located around 5:30 p.m. Her leg injury was stabilized and she was carried in a litter with a litter wheel to a waiting UTV parked inside the Arizona Snowbowl ski area. She was then driven to a waiting ambulance at Agassiz Lodge parking lot. The hiker was transported to Flagstaff Medical Center for treatment of her injuries.

On Oct. 28, SAR responded along with Highlands Fire District, Flagstaff Fire Department and Guardian Medical Transport to a climbing accident at The Pit, a popular climbing area which is accessible from the Canyon Vista Campground on Lake Mary Road. A 23-year-old male from Flagstaff fell approximately 40 feet while lead climbing. The climber sustained injuries to his back.

Rescuers secured the climber in a litter and lowered him to the canyon floor before carrying him to the campground to a waiting ambulance for transport to Flagstaff Medical Center.

On Oct. 28, around 8 p.m., SAR responded to a report of a 62-year-old transient male reported overdue from a walk in the Cinder Lakes area near Flagstaff.

The man had last been seen around 1:30 p.m. The subject had sent some SOS emails to a companion, but was not found at the locations indicated on the emails. After sending the emails his phone had apparently run out of battery power. A search was initiated with search and rescue personnel, deputies and the Arizona DPS Air Rescue Unit. The subject was located around 2 a.m. Oct. 29, after he made contact with his companion by phone and was instructed to call 911. He was located off road in the Cinder Lakes area approximately three miles south east of his camp. He was cold, but in otherwise good condition. He was reunited with his companion at their camp.

Coconino County Sheriff’s Office Search and Rescue Unit would like to remind outdoor users to be prepared for their activities by researching the weather and carrying the appropriate equipment, including the 10 Essentials in addition to a fully charged cell phone.

The 10 Essentials include water, food, extra warm clothing, navigation equipment (map, compass, GPS), a headlamp, first aid kit, shelter material (space blanket or large leaf bag), a fire-starting kit, pocket knife and signal equipment (whistle and signal mirror). In addition to carrying the equipment and the knowledge to use the equipment safely, it is important to leave a detailed trip plan with a trusted person.