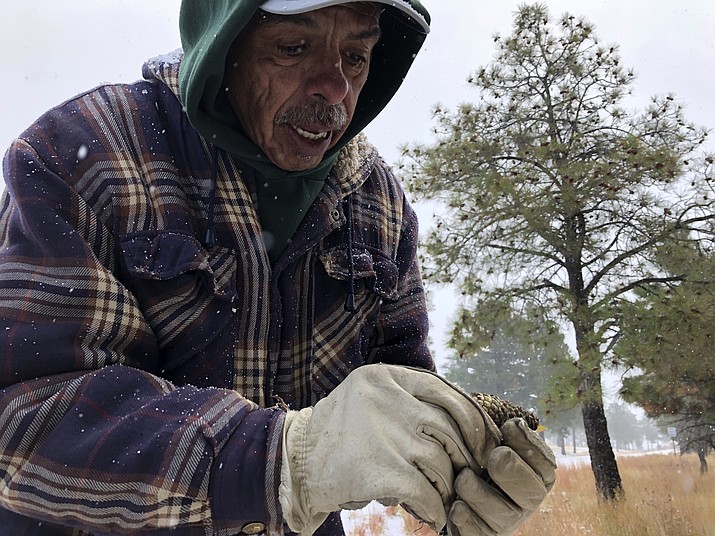 MESA TRAIL, N.M. — With snow ready to fall, the scramble was on to collect as many ponderosa pine cones as possible.

The cones being gathered in the Jemez Mountains of northern New Mexico represent the fruits of a bumper crop. Every decade or so, the trees turn out more seeds to ensure future propagation as a hedge against hungry predators and whatever other hurdles nature might throw at the species.

The cones will be dried, their seeds cleaned, sorted and grown into seedlings that can be used to reforest fire-scarred hillsides. Similar work is ongoing in Colorado, South Dakota and other places in the U.S. West.

With warmer temperatures, more frequent drought and the severity of wildfires on the rise, scientists say seed collection and reforestation efforts are becoming more important.

“We’ve had so many large, high-severity fires in the state, and without our intervention there is a possibility that some of those areas will never be forests again,” said Sarah Hurteau with The Nature Conservancy in New Mexico. “What we’re trying to do is collect the seed to help reforest these areas. This is a huge effort.”

It might sound lofty, but those helping with the project in New Mexico and southern Colorado are looking to take advantage of a rare bumper crop this fall that has resulted from back-to-back summer and winter seasons of average to above-average rain and snow. This doesn’t happen often in the arid Southwest, and scientists say it could become more infrequent as theclimate changes.

Kyle Rodman, a post-doctoral research assistant at the University of Colorado Boulder, studied the density of seedlings that sprouted following fires between 1988 and 2010. In a study published this month, he and his colleagues found the absence of viable seeds can drastically hamper a forest’s ability to recover and that some burned areas were more vulnerable than others.

“The ability of trees to produce seed has a huge implication for natural recovery,” he said. “If the seed is not being produced, then it can’t get to the places that are disturbed, then the chances for the ecosystem to recover to that forested state are obviously pretty low.”

In comes Steven Sandoval and his forestry crew from Santa Clara Pueblo, one of dozens of partners in the seed collecting effort. Sandoval’s crew has been charged with scouting parts of Bandelier National Monument to locate those ponderosa stands with the greatest potential.

Cone picking is a science, much different than a leisurely stroll through the woods to collect cones from the forest floor. Crew members are looking for the perfect cones — no curves, no sap, no insect bore holes.

One such tree was standing not far from the trail atop Bandelier’s Burnt Mesa. Loaded with cones, it took more than an hour to harvest.

Labor- and time-intensive, but necessary, says Meredith Prentice who leads a seed crew with the Ecological Restoration Institute.

“There’s a lot of catastrophic elements like wildfire and drought. It’s being exacerbated by climate change, and so the pool of native species that we’re able to get seed from is shrinking because their environments are getting destroyed,” she said.

From their vantage point atop the mesa, the cone pickers can see for miles past the monument boundary and deeper into the canyons that make up the Jemez Mountains. It’s a landscape that has seen several devastating fires in just the past 20 years.

Overall, the number of fires in the U.S. has decreased slightly over the past three decades, but the number of acres burned is on the rise. Every year since 2000, an average of 10,900 square miles (28,231 square kilometers) have been charred, according to figures compiled by the National Interagency Fire Center.

Last year marked a year of particularly dangerous and destructive fires. More than 100 lives were lost in California, with the Camp Fire accounting for most of those deaths. Nationwide, more than 25,000 structures were destroyed.

Far less land has burned this year, but scientists are confident in their predictions that the combination of overgrown forests and hotter, drier conditions increase the threat of catastrophic fires.

Santa Clara Pueblo has been among the hardest hit in New Mexico, with much of its watershed destroyed by fire in 2011. Sandoval said the tribe is fortunate because it began collecting native seed years earlier and had built up its own seed bank of ponderosa, Douglas fir, spruce and other pine variations.

The pueblo has gathered seeds from about 2.5 million trees in over a decade, he said. Some are stored in special freezers to ensure they last another century. Others are sent to nurseries in New Mexico and Arizona, where they are grown for post-fire restoration efforts.

Sandoval has one word for drought-hearty native seeds from lower elevations: “precious.”

Similar work is happening in the Black Hills of South Dakota, where an estimated 2 million trees have been planted since 2003. Nevada and Utah also have seed banks.

This is the first year for collecting at Bandelier, where officials have requested that the seeds from each tree be kept separate to ensure a genetic profile. Crews also record details on the tree’s location, elevation and measurements.

Earlier this fall, Bandelier planted 6,000 seedlings from cones collected from the Jemez Mountains. Some were planted in study plots that will be monitored to see what planting strategies work best.

“We want to make the best use of this resource,” said Kay Beeley, who has worked at Bandelier for nearly three decades. “It’s renewable but not always available.”