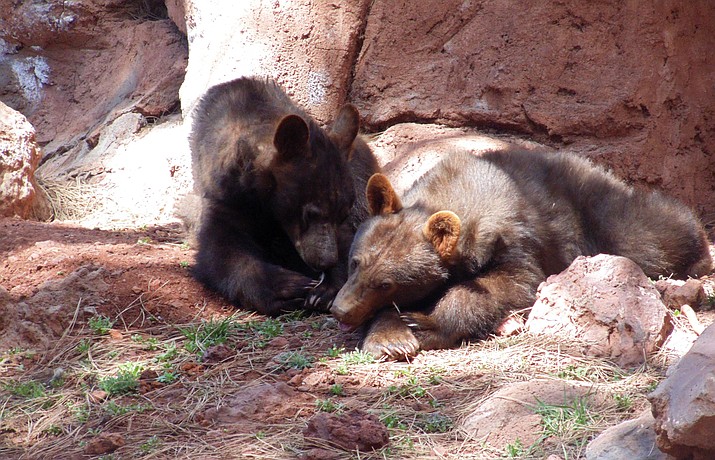 On June 1, Bearizona is celebrating the one-year anniversary of the rescue of the four bear cubs who were orphaned and adopted last year as well as National Black Bear Day. The popular drive- and walk-through wildlife park will donate $5 for every car entering the park to the Appalachian Bear Rescue. (Photo/Bearizona)

WILLIAMS, Ariz. – Bearizona, a popular wildlife park near the Grand Canyon devoted to providing homes to wild animals in need, is celebrating the one-year anniversary of its adoption of four black bear cubs with a $5 donation per car entering the park June 1 to the nonprofit Appalachian Bear Rescue.

In 2018, Bearizona adopted four orphaned black bear cubs after their mothers were euthanized for being too habituated to humans and entering civilized neighborhoods. (Photo/Bearizona)

The celebration coincides with National Black Bear Day, annually recognized on the first Saturday in June. Bearizona hopes to use the day to not only educate the public about the most common bear in North America, but also to dispel myths about the black bear and raise funds for rescue efforts.

In 2018, Bearizona adopted four orphaned black bear cubs after their mothers were euthanized for being too habituated to humans and entering civilized neighborhoods.

The first two rescues were 5-month-old male cubs from Pinetop-Lakeside who made national news when they were discovered hiding at the top of a 75-foot tree one day after their mother was taken by the Arizona Game and Fish Department from a residential neighborhood. A local resident had been feeding the bear daily and this was the second time the Arizona Game and Fish Department had attempted to relocate this bear from a residential area back into the wilderness, which meant she ultimately had to be put down. Unfortunately, the mother was euthanized before the department discovered she had two helpless 15-pound cubs that were unfit to survive in the wilderness without her.

Today, the bears, named Bjorn, Ole, Naki and Dala, are doing well and thriving in their new home.

Located outside of the Great Smoky Mountains National Park in Townsend, Tennessee, the Appalachian Bear Rescue is a nonprofit organization whose mission is to care for orphaned and injured black bear cubs for the return to their natural habitat. The organization also focuses on increasing public awareness about coexisting with black bears and research to support all aspects of returning cubs to the wild.

Bearizona is a drive- and walk-through wildlife park south of the Grand Canyon in Williams, AZ, near the intersection of Historic Route 66, Interstate 40 and Highway 64. The park’s mission is to rescue wild animals in need of new homes and promote conservation by fostering memorable and educational encounters with North American wildlife in natural environments. Bearizona invites guests to take a scenic, three-mile drive through packs and herds of wild animals followed by a leisurely stroll through Fort Bearizona, where additional animals can be seen beneath the towering Ponderosa Pines of Coconino National Forest.