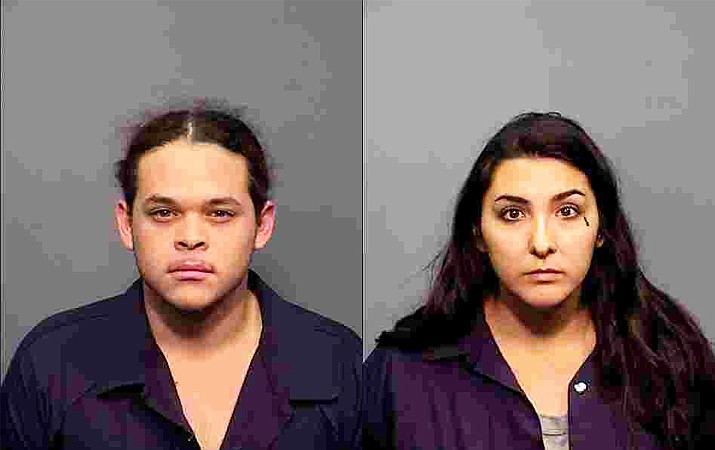 Tusayan residents Reyna Munoz and Ekikiel Valenzuela were charged with aggravated assault by the Coconino County Sheriff's Department May 27. (Photos/CCSO)

TUSAYAN, Ariz. – On May 27 at about 3:57 p.m. Coconino County Sheriff’s Office (CCCSO) received a report of a male subject pointing a gun at people inside and outside of the Squire Inn in Tusayan.

Further reports indicated several shots had been fired outside of the hotel with no injuries reported. Deputies from the Sheriff’s Office, Department of Public Safety Helicopter, Department of Public Safety Officer’s and Park Rangers from Grand Canyon Nation Parks Service responded to the scene. During the investigation the male subject was identified as 23-year-old Ezekiel Valenzuela and a female subject identified as 20-year-old Reyna Munoz.

Upon responding to the Squire Inn, deputies spoke with witnesses on scene who described a male and female subject in the arcade engaged in an altercation. Bystanders attempted to intervene to stop the altercation when the male subject pulled a hand gun from his waist and pointed it at patrons. Both subjects exited the Squire Inn and began walking towards a forested area to the west of the hotel. The male subject again pointed the gun at an employee in the parking lot as the two were walking from the area. Both subjects were found to work at the Wendy’s in Tusayan and reside in local housing. Deputies, DPS and NPS Rangers were able to locate the subjects at a residence in the area and detained both subjects without incident.

Upon interviewing the subjects, Munoz reported she had been the one who had discharged the gun after taking it from Valenzuela. Munoz reported she had not discharged the gun at anyone. A search warrant was obtained for the residence, where deputies located the firearm and the clothing they had been wearing at the time of the incident as indicated by video surveillance. Both subjects were transported to the Coconino County Jail in Flagstaff and booked on multiple charges including aggravated assault, disorderly conducted with a deadly weapon, endangerment and false information to law enforcement.