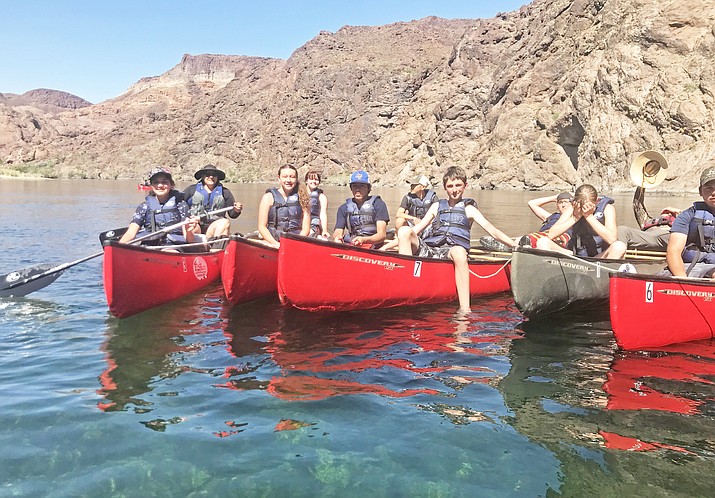 Students from Ash Fork Unified School District take part in a canoe trip of the Colorado river at Black Canyon May 21-23. (AFUSD/photo)

ASH FORK, Ariz. — After months of preparation and fundraising, eighth graders from Ash Fork School returned to the Colorado River for a weekend of canoeing May 21.

Ash Fork eighth graders embark on their trip up the Colorado River at Black Canyon. (AFUSD/photo)

For the third year in a row, Ash Fork Unified School district Superintendent Seth Staples led the group of students, teachers and chaperones to the Black Canyon of the Colorado River for a three-day, two-night canoe expedition to celebrate their eight grade promotion.

The students paddled from Willow Beach to the Arizona Hot Springs.

To raise funds for the canoes and camping equipment, the students found sponsors and held fundraisers throughout the year.

According to Acosta, the students raised enough money to buy another canoe for their collection, along with some cots and folding tables

The students spent time practicing with the canoes in a pool environment prior to the trip, and also spent time learning to rock climb and rappel.

Acosta said the students left before daybreak May 1 and were canoeing upstream by mid-morning toward Arizona Hot Springs.

On day two, the students paddled to Boy Scout Canyon and Moon Scape, and eventually made it all the way to Hoover Dam.

“The weather was a little colder than usual, but it still felt perfect,” Acosta said. “Thank you to all of the adults and sponsors that made this canoe trip another successful expedition once again.’

Located within Lake Mead National Recreation Area, the Black Canyon area of the Colorado River is known for its thermal and non-thermal springs with water temperatures ranging from about 55 to 136 degrees Fahrenheit. Many of the springs are large pools, and some are just seeps from small fractures in the rock walls. Many of these seeps are covered with a mixture of the mineral travertine and algae-type vegetation which ranges in color from green to orange.

Arizona Hot Springs produces fairly constant 111 degree Fahrenheit water that drops through several small pools before discharging in to the Colorado River. Native Americans first came to the spring and it was noted on a map in in 1857 and 1858 by Lieutenant Joseph C. Ives of the U.S. Army Corps of Topographical Engineers.