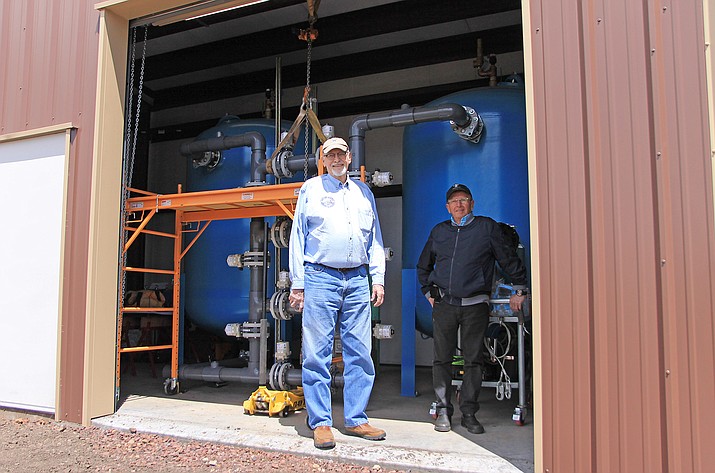 WILLIAMS, Ariz. — Four years and millions of dollars later, the city of Williams has gained significant traction on sustaining a dependable water system.

After a water crisis that frustrated residents and stalled new development in 2014, the city has made a series of changes to avert being in the situation again, with the most recent change the addition of a $250,000 onsite arsenic treatment system for Rodeo Well.

The city had all but abandoned the Rodeo Well, which had been plagued with problems. The well was producing water, but repeated equipment malfunctions perplexed city water managers.

In 2014, with a change in city water operators, the city began taking another look at the well.

“My theory is that there are two different zones that the water comes in through and when they drilled it they put the pump in the lower zone to get more production, but as the water was cascading in it was causing the CO2 to shear off the pumps - similar to shaking up your coke,” said the city’s water contractor, Pat Carpenter.

Carpenter and city water crews moved the pump higher in the well, which resulted in a 25-30 percent reduction in production, but has saved the equipment and created a producing well.

With the well fully operating, city water operators were still having to pump the water to the city’s water treatment plant for arsenic treatment which wasn’t ideal for the system.

Carpenter said the water treatment plant can only handle 800,000 gallons of water per day, so it’s to the city’s benefit to limit the amount that is processed through the plant.

“(When it goes through the plant) we have to backwash the filters more often and we have the additional chemicals,” he said.

The Rodeo Well produces 288,000 gallons per day, which will now run directly into the city’s water distribution system instead of being pumped to the water treatment plant.

“Last year at this time we were up almost 700,000 gallons because everything was dry and people were trying to keep their plants alive,” Carpenter said.

Carpenter said the large blue canisters housed near the Rodeo Well contain media that is similar to a water softener. He said the media grabs the arsenic, which is a metal, and pulls it out of the water.

The two tanks are two different filters that will alternate processing the water.

“One tank will be online and when it gets plugged, it will go offline and the other will go online,” Carpenter said.

While the first tank is offline, it will get backwashed and the backwashed water will go to the waste water plant.

Carpenter’s company, A Quality Water, contracts with 15 water entities in the state, and when compared to those sites, Williams has one of the most complicated systems, he said.

“All the systems pump the wells, the water comes out of the ground, you chlorinate it and it goes to the storage tanks and into people’s homes,” he said. “That’s how simple it is.”

Currently the city of Williams obtains 90 percent of its water from the Dogtown wells and Dogtown Lake. The city can also obtain surface water from four other lakes, which include Kaibab Lake, City Dam, Santa Fe Dam and Cataract Lake. Besides the Dogtown wells, the city has the Rodeo Well, the Santa Fe Well and the partially completed Sweetwater Well.

The combined capacity of the five lakes is 894 million gallons, although capacity varies each year based on precipitation.

Carpenter said the city varies in how they use the lakes for potable water. He said if the lakes are spilling over, the city will use the overflow in the city’s water system instead of letting it run out into Cataract Creek. He said that no only conserves water but also keeps the lakes full for recreation.

Once the lake levels begin to drop, the city alternates to running the pumps.

“Williams is way complicated,” Carpenter said. “But fortunately the city has Tiger (Grantham) at the plant who has been around a long time and understands all the weirdnesses and is a real asset to the city.”