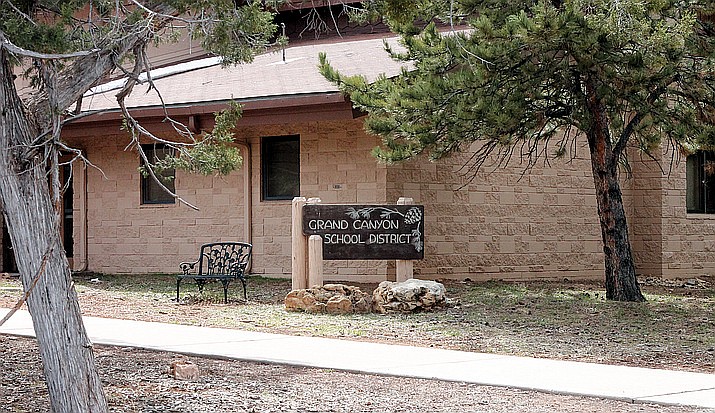 Grand Canyon School is located within Grand Canyon National Park. It is the only K-12 school located inside a national park. (Photo/WGCN)

GRAND CANYON Ariz. — After a long wait, Grand Canyon School will finally be getting high speed internet that students and staff so desperately need.

The school recently learned it was approved for an E-Rate grant, which will foot the bulk of the bill for running fiber to the rural schoolhouse.

Grand Canyon School Superintendent Dr. Shonny Bria said the school received the official paperwork for the federal grant in March. The state of Arizona, which provides 20 percent in matching funds (the federal government pays 80 percent), awarded their portion of the grant last summer.

“I’m really excited about the high speed internet project,” Bria said. “One of the very last things Secretary Zinke did before he left office in December was sign off on our grant.”

Bria said the fiber, which will be run from Williams via the Grand Canyon Railway railroad tracks, will be attached to the school building by June 30, 2020. Tusayan Town Manager Eric Duthie, who has been involved in the process with the school district partners, said he is under the impression that approvals for projects such as replacing poles unable to bear the extra weight of fiber should be complete by October.

Bria said the school had been counting on what she called a bridge — microwave high-speed internet paid for by the school to help ease the pressure until fiber arrived. Although it was approved several months ago by the school’s governing board, it hasn’t happened yet.

A lack of high speed internet at the school has had serious consequences for both students and staff. One example, Bria said, was that the school’s IT director recently had to shut off internet service school-wide so that the administration could submit payroll information via email to Flagstaff.

“The bottom line was we could not make a connection and send our data to Flagstaff to the county until our IT director literally turned off everything to clear a way for us to do so,” she said.

Bria said they were left with no other alternatives.

“The county isn’t open at midnight,” she said. “We’re in a real fix right now. We have no internet access during the day right now, and it’s never, ever been so bad.”

Another obstacle is AZ Merit testing, which the majority of Arizona schools do online. Because Grand Canyon students still take the test with paper and pencil, they are required to take the test a month earlier than nearly every other school in the state, leaving them at risk of being less prepared.

Grand Canyon is one of only about five schools still required to do paper testing because they don’t have the bandwidth for the students to test online, even in shifts. Next year, those other schools will be testing online — since Grand Canyon is the lone school still using paper tests, the state has said it won’t accept that method next year.

“Our high school math teacher has said he could do so much with that extra month,” Bria said.

If a high-speed internet solution isn’t in place before next year, Bria said the district will have to pay out of pocket to bus students to either Williams or Flagstaff to take their tests. That would not only hit them in the pocketbook, but Bria said it also risked the chance of students being tired, uncomfortable, hungry and not prepared to do as well on their tests.

“It’s going to put us in a situation where our kids can’t do as well as everyone else in the state,” she said. “It’s unfair, it’s unacceptable.”

Bria confirmed that the appropriate paperwork had been approved and signed by the National Park Service, which was required since the school is considered a historic building within the park. Once that comes through and the contract begins, the school will have the high-speed internet they need temporarily until fiber is installed.

Aside from Grand Canyon School, the town of Tusayan will also benefit from the fiber connection, which will pass through the town. The town completed a construction project last year to lay a loop of fiber along State Route 64 for the eventual arrival of fiber-based internet. The fiber will connect to Tusayan’s loop near the airport, run north along SR 64 and continue to the school via APS power line poles.