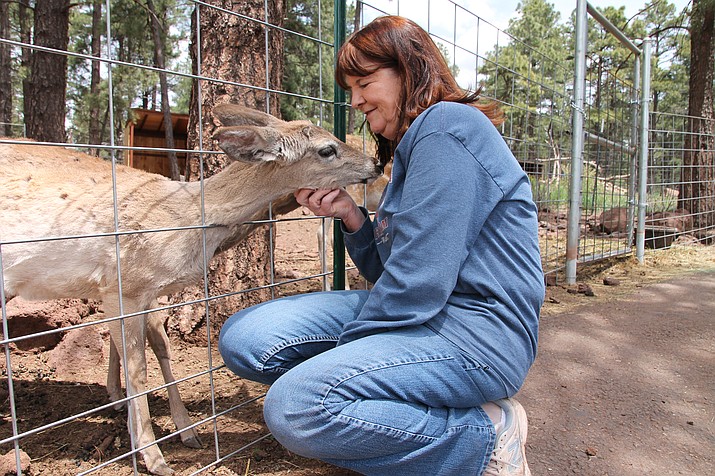 Patricia George nuzzles a deer at the Grand Canyon Deer Farm. The Deer Farm is celebrating 50 years of business this year. (Erin Ford/WGCN)

WILLIAMS, Ariz. — Flipping through old photo albums takes Grand Canyon Deer Farm owner Patricia George back to the beginning. She flips past a faded photograph of herself with long hair, parted in the middle, in front of a few small deer.

“That first year, business was up 25 percent. God was with us there.” - Patricia George

They had made the trip from Phoenix just three years after the original owners, the Hamiltons, built the farm in 1969. The next picture was taken soon after during their honeymoon a year later.

To say that she fell in love with the place was an understatement. She and her husband, and then their family, visited the Grand Canyon Deer Farm more than 10 times over the next decade. She jokes often to her kids that she has more photos of the deer farm than she does of them.

When it came up for sale, the Georges couldn’t believe it.

“We found out by accident — although personally I don’t believe there is such a thing,” she said. “By the time we found out about it, it had been for sale for two years. We called about a small RV park that had animals, and they said, ‘why don’t you just buy a zoo?’

The couple had just purchased a house in Phoenix, but the allure of the deer farm outpaced it by far. Although the first attempt fell through — George wasn’t sure they could make it if they took over just before the off-season — by March 1987 they were settled in.

That’s when they found out the alarming news that the U.S. Department of Agriculture was looking at shutting the deer farm down.

“About two weeks after we took over, a lady from the USDA showed up to shut us down,” George said. “The previous owners had only been feeding once a day, but when we took over, we were feeding twice a day and it made such a difference in two weeks that they didn’t shut us down.” 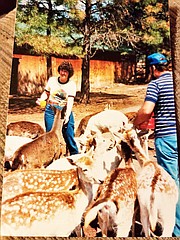 Although the USDA continued to check their progress frequently, the animals under George’s care continued to thrive. In fact, they had such a good year their first go, they passed all expectations.

“They told us when we bought the place that we were going to have to increase business by 20 percent or we were going to lose our house and the property,” she recalled. “That first year, business was up 25 percent. God was with us there.”

Life at the deer farm wasn’t without many a challenge, however. And the Georges soon realized that their previous work experience — Patricia worked at UPS and Randy at Honeywell — didn’t prepare them for all the things they would face as guardians of the wilderness.

She recalled the first time she realized that animals having babies was not something she always needed to go to the veterinarian for, for instance.

“You know, we would take them to the vet, 40 minutes away, if the birth was hard, and we found that a lot of the animals were passing on the way,” she said. “I remember watching the vet reach up in there and pull out a baby and I thought, ‘That doesn’t look so hard.’”

It is something she’s become very well acquainted with. She laughed as she recalled a visiting reporter and camera crew from Phoenix who were shadowing her for a story about the farm.

“He told me to just pretend like he was a tourist and tell him what someone visiting us would see,” she said. “We were walking and all of a sudden I heard the goat and I looked at him and said, ‘We’re having babies,’ and I took off.

George said the goat in question nearly always had four babies at a time and at least one of them was always difficult.

“As I was walking up I heard one (baby) hit the wall so I knew she was definitely having them, and as we got there sure enough, the third one got stuck,” she laughed.

In what had become second nature, she delivered the kid goat without a thought, wrapped it in a towel, and handed it to a staff member to show nearby visitors. As it turns out, the kid goat was born missing a hind leg, but George proudly states that she never let that slow her down. The kid goat was eventually donated to a camp for children with disabilities.

“I really didn’t want to let her go, but then I thought, ‘What better place for her to encourage those kids?’ George said.

In the 32 years since she and her husband took a chance and left Phoenix for a life of nighttime feedings, rescues, camel kisses and springtime babies, George can tell you many stories about each and every one of the park’s inhabitants. Some of them, she says, have been with her almost since the beginning. Several of the donkeys and miniature horses are in their 20s in contrast to the new fawns, pea chicks and reindeer born each spring.

The animals have been part of her life almost since the farm’s inception, which celebrates its 50th anniversary this year, and George is proud to say she plans to keep it growing. Although the farm had been for sale for the past couple of years, George has reconsidered, and now says she won’t be passing it on anytime soon.

Among the animals she’d like to see are Fennec foxes, and of course she’ll continue to make room for any rescues in need of a loving home. She’s hoping that the farm’s lone albino animal — a little wallaby named Hope — will have her own little bundle of joy soon.