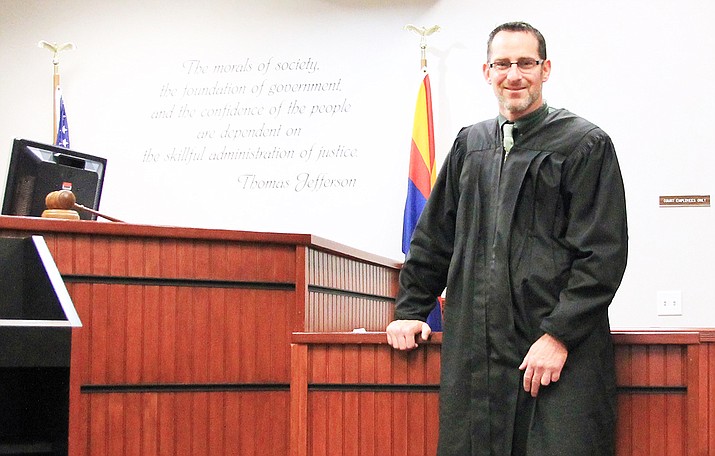 WILLIAMS, Ariz. — With 17 years of practicing law in Arizona, Adam Zickerman is bringing his varied experience to Williams as the new magistrate judge at the Williams Municipal Court.

Zickerman has extensive experience as a prosecutor and defense attorney for state and federal agencies, and currently owns The Zickerman Law Office, a private practice, in Flagstaff.

Zickerman grew up in Tucson and after graduating from Thomas Cooley Law School in Lansing, Michigan, returned to Arizona where he worked in criminal law at the Apache County Attorney’s Office. In 2005, Zickerman moved to Flagstaff and worked as a deputy county attorney at the Coconino County Attorney’s Office handling violent crime, sexually based crimes and special prosecutions.

“I was born and raised in Arizona,” Zickerman said. “I’ve always liked the mountains. When I first started out I was living in Show Low and commuting to St. Johns. I kind of have an affinity toward the small towns and Williams just fit very well.”

Zickerman said he has always enjoyed all aspects of the legal profession and between 2007 and 2010, Zickerman taught courses at Coconino Community College and Northern Arizona University that covered family law, constitutional law, criminal law and homicide and sexual offense defense among others.

“When I went to law school, there was this big mural on the side of the building that says “One should never forget that you’re nothing more than a minister of justice,”” he said. “And that has pretty much been my maxim throughout, always being a minister of justice no matter where it is.”

Zickerman feels that his experience as an attorney at the state and federal level, along with his private practice experience, have laid the groundwork for being a judge.

“Having the background of the state’s view or prosecution view, and the defense view gives me a really good balance,” he said. “And it’s getting to the time that I can use this to best serve citizens of the community.”

Zickerman said no matter what role he has taken in the legal system, his focus has always been to promote justice.

“I want to be able to use the experience I have for the best possible outcomes for people,” he said. “A lot of being a magistrate and being a judge is the willingness to listen.”

As Zickerman settles into his new role as magistrate judge, he said residents can expect a few changes at the court.

“I think the biggest thing is that there’s going to be some change in how things are done, but the change should be good,” he said. “It should be a positive change.”

Zickerman said to streamline the administration of the court, new days and hours have been announced.

The court will handle walk-ins every Friday beginning at 9 a.m. to handle warrants, suspension, payment plans and other services. There will also be batch court the first Thursday of each month. This will include civil trials, traffic offenses and misdemeanor cases. Hours for all court customers making payments or having administrative questions is Monday-Friday, 8 a.m. – 5 p.m. including lunch.

Information about the Williams Municipal Court can be found by calling (928) 679-7698. The court is located at 700 W. Railroad Ave. in Williams.