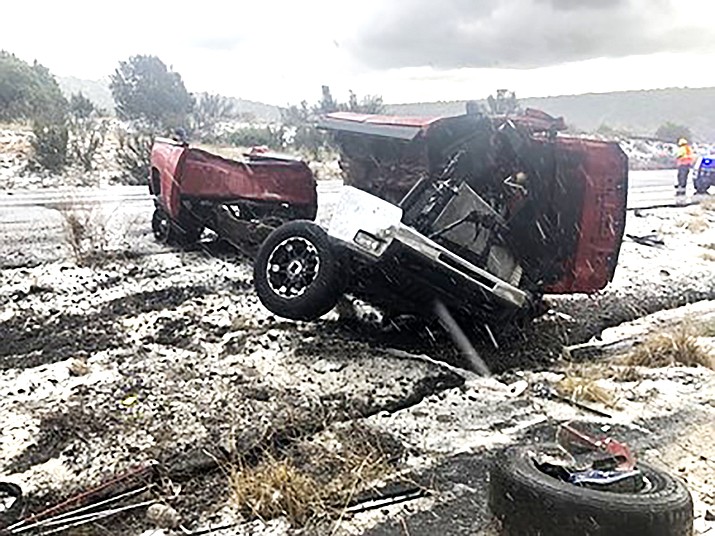 The department is continuing work on the strategic plan for the department. On April 22, Williams Fire Chief Kevin Schulte and fire personnel met with a city council committee to discuss full-time, paid positions for the department. The city has asked Schulte to write full job descriptions for each position requested. Schulte said he plans to meet with the committee again in the near future.

WFD were dispatched for the following incidents:

On April 4, WFD was dispatched around 1:42 a.m. to Grant Avenue in response to a domestic violence situation. Williams Police Department (WPD) and Coconino County Sheriff were on scene. Engine 7 was staged at the incident until it was resolved with an arrest around 4:57 a.m.

On April 9, WFD responded to a down power line in which a power pole to the northwest corner of the property was hung up against a phone line. (Photo/Williams Volunteer Fire Department)

On April 9, WFD responded to a down power line on E. Mountain Man. Upon arrival crews found that a power pole to the northwest corner of the property was hung up against phone line. Engine 7's crew waited for the arrival of APS, however, due to other power outages in the area they had a timely delay. After determining the scene was safe with APS Engine 7 cleared the property. Later that evening APS fixed the broken power pole.

On April 12, WFD was dispatched for an individual with respiratory difficulties on I-40 at milepost 171. Due to lack of personnel, Ponderosa Fire District was notified to respond to the incident.

On April 12, WFD was dispatched to State Route 64 for an unknown injury accident. Arrived on scene to find a three wheeled motorcycle off the road into a tree.

On April 12, WFD was dispatched for a multi vehicle accident on I-40 at milepost 154. While enroute helicopter was notified and placed on standby. Rescue 1 arrived on scene to find one vehicle in the median which appeared to have rolled numerous times and was positioned on its side. Patient was ejected from vehicle. Lifeline ambulance, DPS and Ash Fork fire were also on scene.

On April 15, WFD was paged out for tractor trailer accident. Cancelled enroute.

On April 15, WFD responded to a report of smoke alarm activation on North Grand Canyon Boulevard. Cancelled by Alarm Company.

On April 18, WFD responded to a report of RV fire at Loves Travel Stop on North Grand Canyon Boulevard. Engine 7 arrived to find RV fully involved with no exposures. RV was located in the west car parking lot adjacent to the fuel pumps. E7 crew pulled 1 3/4 attack line for fire control and extinguishment. Water supply was established at hydrant. Fire was knocked down and Ponderosa Fire was cancelled. Occupants were checked by Lifeline ambulance. Fire extinguished; RV was a total loss.

On April 18, WFD was cancelled by fire dispatched prior to leaving station.

On April 25, WFD responded to an unknown injury accident on State Route 64.

On April 6, Captain Ryan Kopicky and fire personnel assisted with installation of 30 smoke detectors and 19 CO alarms in collaboration with the Red Cross, Coconino County Emergency Management and CERT. Kopicky said it was great day of helping the community. Another installation is planned for August.