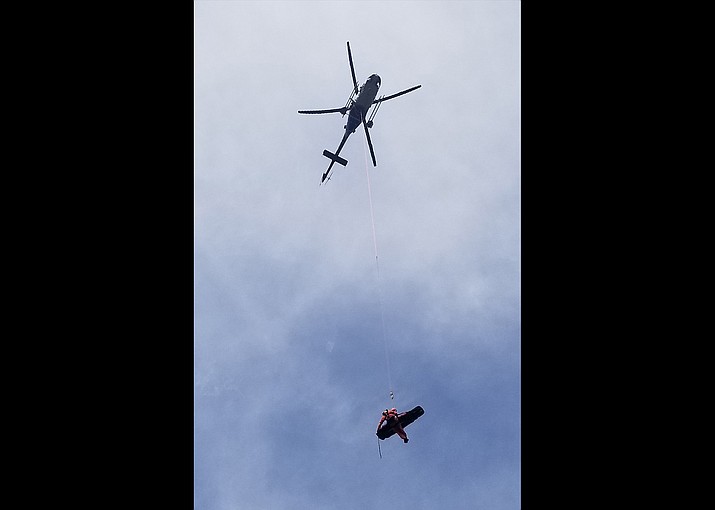 Coconino County Search and Rescue performs a short-haul of an injured climber at Sycamore Canyon May 5. (CCSO/photo)

FLAGSTAFF, Ariz. — Coconino County Sheriff’s Deputies and Search and Rescue unit had a busy weekend, responding to four search and rescue operations within a six hour period May 4, one rescue May 5 and two operations May 6.

On May 4, around 12:48 p.m. the Cottonwood, Arizona 911 center received a 911 call for a female who had fallen in a climbing accident on Steamboat Rock outside of Sedona. A DPS Air Rescue helicopter based in Flagstaff responded. The air rescue helicopter with a short haul technician from Sedona Fire were able to move the patient, a 56-year-old woman to a waiting ground ambulance.

At 1:30 p.m. the Flagstaff 911 center received a call from a female hiker who had become lost and stuck on the back side of the San Francisco Peaks at an elevation of 11, 400. A team of five search and rescue volunteers hiked up the Abineau Trail. Rescuers encountered waist deep snow getting up to the subject but were able to provide the subject with warm, dry clothing before walking her off the mountain.

At 3:23 p.m. a 12-year-old boy from Glendale called 911 to report he was lost in the Forest Lakes area in the southern most part of Coconino County. The boy had been camping with his family at Woods Canyon Lake and had walked away from his camp and became lost. Law enforcement located the boy within about an hour of the call.

At 6:02 p.m. a second 911 call was received for an injured hiker in Chevlon Canyon just outside Forest Lakes. The caller reported their fiancé had suffered an injury as well as a panic attack while on a hike and was unable to get off the canyon. The injured hiker, a 35-year-old male from Scottsdale, Arizona, had suffered a sprained ankle. Rescuers were able to walk the victim out of the canyon.

On May 5, CCSAR received a call from Life Line Ambulance requesting assistance with a climbing fall victim at Paradise Forks in the Sycamore Canyon area south of Williams. Life Line had responded to the original medical call and upon arrival to the scene, found the victim over a cliff requiring a technical response. A rescue team were able to lower a short haul technician and a litter down to the victim by rope. Both the technician and victim were air lifted out of the canyon by the DPS Air Rescue helicopter based out of Kingman, Arizona. The victim, a 24-year-old female from Tempe, Arizona was transported to an area hospital for treatment of possible broken ankles and other leg injuries.

Early morning on May 6, CCSO deputies and SAR initiated a search for Timothy Coen, a missing 29-year-old man from Minnesota. The Sheriff’s Office utilized it’s fixed wing aircraft to search the area west of Valle that afternoon, locating Coen’s vehicle abandoned or possibly disabled in a remote area several miles west of State Route 64. A DPS Helicopter was utilized until dark with negative contact. Ground search crews were able to follow Coen’s tracks throughout the night and continued search efforts. Coen was found by a local resident in a remote, uninhabited area and was given a ride into Williams.

On May 6, around 4:10 p.m. CCSO received a call for a possible drowning at Willow Springs Lake outside of Forest Lakes. Law enforcement responded and learned that Danny Boyd, 68, of Pine, Arizona had somehow fallen into the water while fishing the lake from his small boat. The deputy and other fisherman on the lake tried to find Boyd in the water but were never able to see him. CCSO requested the Gila County Sheriff’s Office dive team, who were able to locate Boyd’s body in about 18 feet of water.