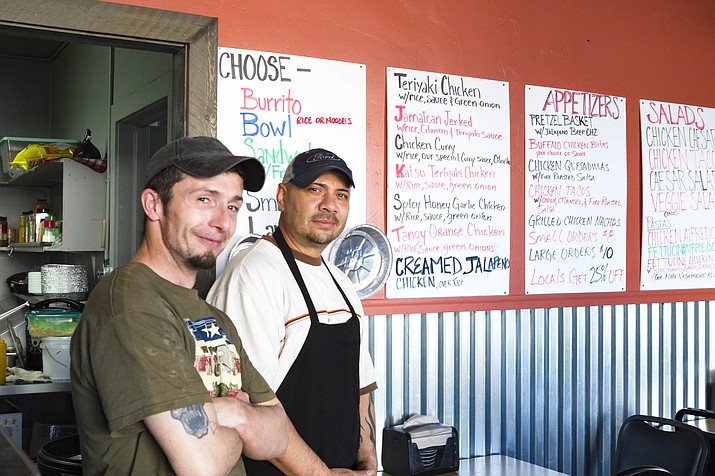 WILLIAMS, Ariz. — With some of the best prices and recipes in town, the Little Chicken Spot is receiving two thumbs up from locals.

The new restaurant, located directly behind the World Famous Sultana Bar opened March 7 and is gaining promising reviews by those patronizing its humble occupancy.

The Little Chicken Spot is owned by Rick Gonzalez, who is a native of the Bronx, New York, but who made a living in Phoenix before making his way to Williams several years ago.

Operating a restaurant isn’t exactly Gonzalez’s career field, having at one time owned a body shop, mechanic shop, auto dealership and several rental homes; he only recently became a chef and now a restaurateur.

“It gave me an opportunity to re-prioritize the things that are important in my life,” he said.

Gonzalez said his faith plays a big part in his current outlook in life, which is to give back to his community and to be a better person.

“That’s really what brought me up here, just to try to be a better husband to my wife, a better father to my kids, better friend to my neighbors,” he said.

Gonzalez said he has always loved to cook but had never done it professionally until he moved to Williams.

His idea with the Little Chicken Spot is to offer delectable dishes at affordable prices.

“I’m not rooted by the dollar, that’s not my first priority. Rather than making a ton of money here I just want to be an asset to my community. I know a lot of people in this town are hard-working people — have two or three jobs and can’t afford to eat nowhere,” he said.

Gonzalez believes that if you treat the local population well and have great food the tourists dollars will come.

“Tourists like to eat where the locals eat, so if I do right by the locals the tourists will automatically come here and spend their money,” he said.

His main dishes are all chicken based, which is one way he is able to keep his overhead costs down and charge less.

“Chicken is the cheapest, least expensive protein,” he said. “If I don’t have to compete with the other restaurants that are making ribs and steaks, then I can keep my price point very inexpensive.”

Favorite dishes include Jamaican Jerked Chicken and Teriyaki Chicken. Other top contenders are the chicken taco salad and buffalo bites.