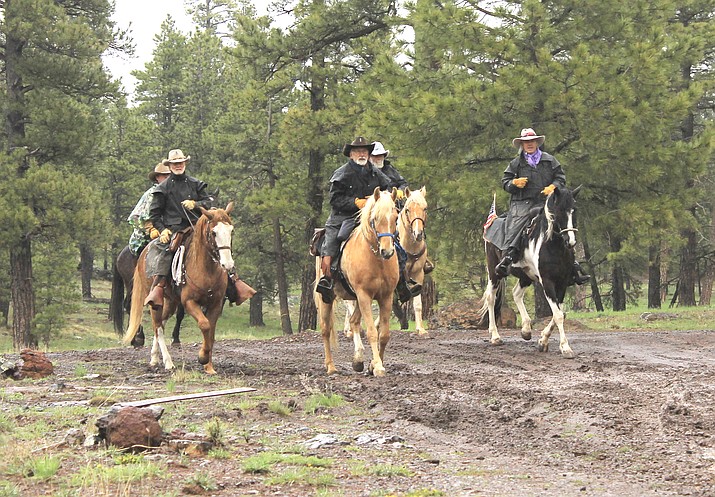 WILLIAMS, Ariz. — The Williams Mountain Men made their annual ride May 8-15, traveling close to 200 miles on horseback through northern Arizona.

Bill Williams Mountain Men prepare to embark on their 200 mile ride from Williams to Black Canyon City May 8. (Loretta Yerian/WGCN)

In the tradition of the mountain men of old, the Bill Williams Mountain Men rendezvous for six and a half weeks riding, visiting and traveling the countryside on horseback.

“We do something that nobody else in this country does,” said Jeff Asworth, a 25-year veteran of the ride. “We’re the only group that I know of that starts here and goes to a different place. That’s why we call it a Rendezvous Ride. Because when the mountain men were in these mountains and up north they would trap all winter and then all spring they would take their furs to the rendezvous where the traders would come in and they could trade their furs.”

The mountain men started their annual Rendezvous Ride from Perkinsville Road in Williams and completed the ride at Black Canyon City May 15.

During the six and a half days in between, riders camp in remote areas, cross canyons, rivers and wilderness and encounter the urban interface of sub-divisions and towns. Their route takes them directly south from Williams — across the Verde River and Hell Canyon to Prescott Valley and Dewey to the Agua Fria River.

“Then we cross over and go through Grape Vine Springs up over the mountain to Mayer-Goodwin Road, down through the Canyon … we’ll go through the old Black Canyon Trail and end up at Old Cordes,” Asworth said.

A Bill Williams Mountain Man prepares for the 200 mile ride from Williams to Black Canyon City May 8. (Loretta Yerian/WGCN)

The last camp of the ride is near Bumble Bee, with riders having covered 200 miles with more than 15,000 feet of elevation change during the trip.

“We don’t go the same route every year. The trail boss lays out the route,” Asworth said.

Riders are from across Arizona, including Phoenix, Prescott, Chino Valley and Williams. This year seven mountain men made the ride, with six additional members serving as camp crew. The camp crew goes ahead of riders to prepare meals, set up camp and haul supplies for the men and horses.

In the past riders made the ride in March, however, the last two years riders changed their departure date to May, when the weather is clearer and riders can take time off from work. Other conditions they take into consideration are fire hazards.

“Last year we couldn’t have a fire. Then we ran into fire at Potato Patch and we had to turn around and go back,” one rider stated.

The mountain men were able to complete the ride after being trailered around the fire.

This year, like every year, riders start conditioning their horses and themselves for the Rendezvous Ride several months in advance. It’s during this time that a lot of the planning occurs.

“Probably the most challenging section is Hell Canyon,” Asworth said.

A large portion of the ride takes place across several cattle ranches. Asworth said having a good relationship with ranchers is essential to gaining access through the land.

“As long as we respect them, they respect us and it allows us to go and do the things that we do,” Asworth said. “Without that we wouldn’t be able to make this ride.”

According to Asworth, it’s a long ride, but worth every step.

“That’s what makes us unique, we do something that other people don’t do. We get on a horse and ride from point A to point B to point C and always, every time we go on this ride everybody says, ‘It’s too fast. It happened too fast, let’s turn around and ride back,’” he said.