Shifting science: Looking at Grand Canyon's next 100 years
Science panelists discuss where Grand Canyon research has been — and where it's going 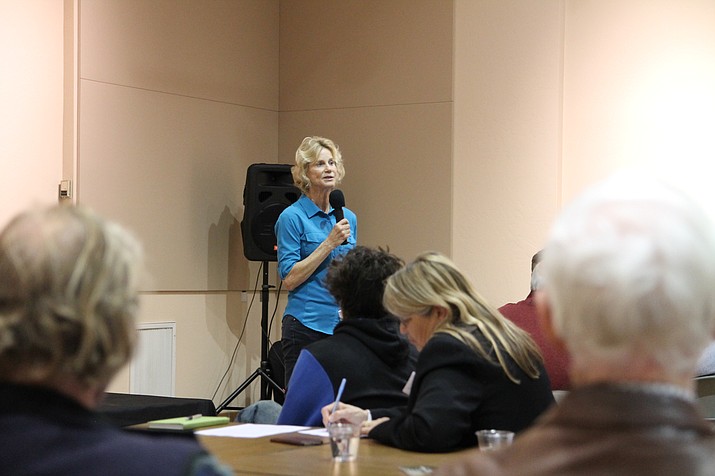 Jeanne Calhoun, chief of science and resource management at Grand Canyon National Park, discusses how the park is managing its research to adjust for climate change. (Erin Ford/WGCN)

FLAGSTAFF, Ariz. — Standing at a point along the rim and gazing out into the Grand Canyon, it’s sometimes difficult to remember that the Canyon is more than a beautiful piece of scenery.

It’s a living organism unto itself, and biologists and researchers have learned much about it in its first 100 years as a national park — including the fact that there is so much more to learn than anyone realizes.

Panelists gathered at the Museum of Northern Arizona May 1 to discuss how far research has come in the past century, but perhaps more importantly, how far it has yet to go.

Jeanne Calhoun, division chief of science and resource management at Grand Canyon National Park, said currently only about 6 percent of the park’s one million-plus acres have been fully surveyed. Part of the challenge, she said, is determining what research needs to be prioritized as forces like climate change shape the land in new ways.

Calhoun also said it’s difficult to project out 100 years what research and resource management might look like at Grand Canyon as climate change affects changes to the landscape in previously unknown ways.

“Based on what we know are going to be some of the big changes, we can at least start to turn the barge in the right direction to be able to address some of those changes at Grand Canyon,” she said.

For starters, Calhoun said, the Grand Canyon region itself will lose some of its forest and will see changes in the types of animals and plants found there, noting that some would migrate out while others, including javelina and coatimundi, typically found at lower elevations, migrate in.

Although cultural research at the Grand Canyon has been ongoing throughout the last century, Calhoun said only about 6 percent of the park has been surveyed, and in that 6 percent, researchers have already found about 4,500 cultural sites that the park protects.

“At this rate, we could have as many as 60,000 cultural sites, so one of the things we need to do in the future is complete our survey of cultural resources, and come up with methods to protect those resources from climate change impacts,” she said.

Calhoun said the park is also working on a comprehensive paleontology survey of the park this year, complete with a paleo-blitz later this fall. Research is also planned for the park’s approximately 300 known caves. Calhoun noted that about 97 percent of the park is Karst topography, or limestone formations riddled with caves, most of which are unexplored.

“We started doing massive research (on the caves) about eight years ago,” she said. “We really need a cave management plan, which is another thing we’re going to be doing.”

The park also plans to do more research on wildlife, something Northern Arizona University professor of conservation biology Pete Beier focuses on in his research to preserve biodiversity around the globe, but also in the unique Grand Canyon region.

Beier said preserving diverse environments — those with different chemical make-up, geographic formations, and other factors is key to supporting the most biodiverse assortment of species that live in such places.

Beier described a mechanism that researchers use to filter species that need to be preserved, but said that approach doesn’t cover the vast majority of the planet.

“But that doesn’t work for everything,” he added, “because we just don’t know. We’ve only named probably about 15 percent of species on the plant. Out of 10 million species, we’ve named about 1.5 million of them. We don’t know where hardly any of them occur, so we can’t take that fine filter approach and draw a circle around where everything is.”

Beier said they now use a course filter approach to preserve about 30 percent of all the different vegetation arrangements, especially those that are rare. With climate change at the forefront, that method will no longer work. Because of that, Beier went on to develop the idea of conserving the stage, which means conserving geophysical settings that support a wide diversity of life.

Of all those geophysical settings, Beier describes Grand Canyon as one of the best.

“If I was going to assemble a place that has great diversity of geophysical settings, close proximity and small and large incidences, possibilities for species to make short distance movements to favorable settings, I couldn’t do better than Grand Canyon,” he said

That makes it a target for proponents of assisted migration – taking species from one location and transplanting them into another as climate change renders the habitat they once called home unsurvivable for them.