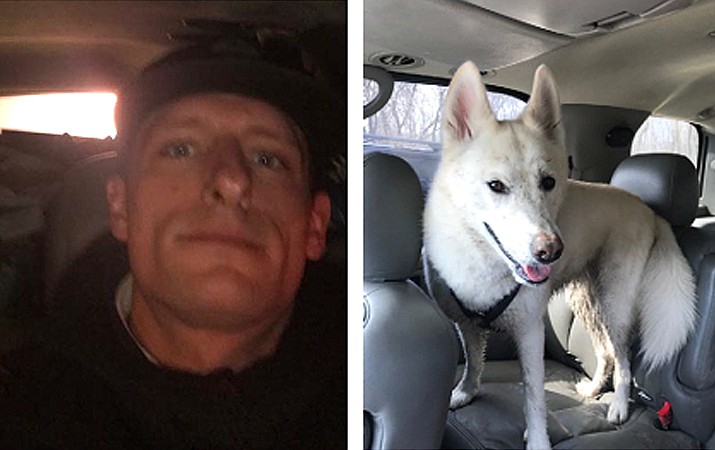 Timothy Coen was last seen with his dog, Harlow May 2 near Williams. (Photos/Coconino County Sheriff's Office)

WILLIAMS, Ariz. - Timothy Coen was found by a resident May 7 around 10:15 a.m. driving through the 4 Hills Ranch area located approximately 15 miles north of Williams Az.

Coconino County Sheriff’s Office was contacted around 9:30 a.m. by a local resident stating he believed he had found Coen. The resident then advised he was currently driving him to the Senior Center in Williams. At approximately 10:15 a.m. sheriff’s deputies arrived at the Senior Center in Williams and met with the resident and confirmed the subject was Coen. Coen appeared in good health but medics were requested to complete a medical evaluation.

Coen, who had been missing for almost five days was not with his dog Harlow. Investigators learned, Coen had left Harlow at an abandoned home he had been using as a home base while looking for help. Coen said one of the days he had been out looking for help he was unable to find his way back to the home. Coen said he had left his dog three days prior.

Through descriptions of the house and area obtained from Coen, deputies were able to locate Harlow in good condition at the abandoned home described by Coen off Thunder Valley Road approximately eight miles from where Coen had been found. Deputies transported Harlow to the Humane Society to be checked out medically.

Coen was treated by Lifeline Medical Ambulance for dehydration but refused further medical treatment. He was later transported to a local hotel to rest and start making arrangements to recover his vehicle and Harlow.

Coconino Sheriff’s Office would like to thank the Department of Public Safety and the community for their assistance in bringing this matter to a happy ending.

Coen is believed to have been traveling through Northern Arizona and possibly the area north of Williams.

Coen last made contact May 2 around 11:30 p.m. with a friend, stating that his vehicle was disabled and that he was going to walk for help. No further contact with Coen has been made since then. Coen is not familiar with the area, he is in the company of his dog, Harlow.