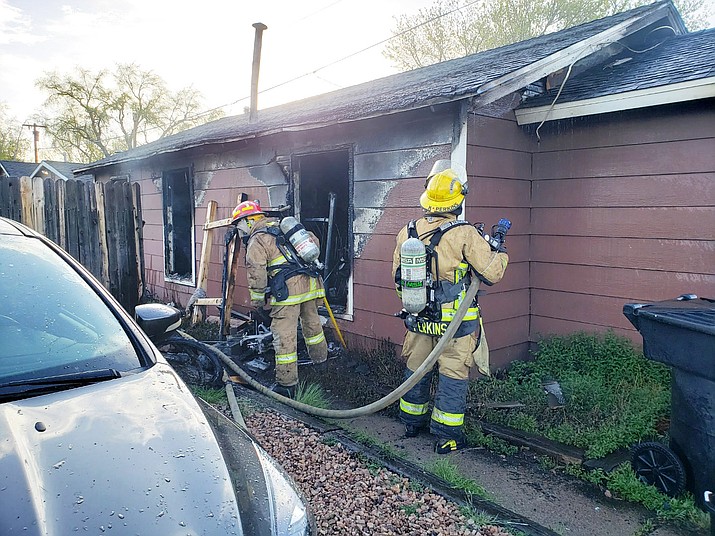 The fire is believed to have started when the occupant of the house was working on a motorcycle inside the home.

Williams firefighter Ryan Thibault prepares to enter the house after the fire was extinguished. Each room of the house was sprayed using CAFS (compressed air foam systems), helping to ensure the fire would not later re-ignite. (Photo/Williams Volunteer Fire Department)

Williams Fire Chief Kevin Schulte said the heat source causing the fire is undetermined but said it is believed that the fuel from the motorcycle was involved in the fire’s ignition. The fire has been classified as unintentional.

“We’re just not positive on the heat source that started it,” Schulte said. “The IC (Incident Commander) was comfortable with that. An investigation was not undertaken.”

“I personally made the call for Ponderosa and Ash Fork for mutual aid as back up,” he said. “It is a standard practice in the fire service to pull all resources and cancel what is not needed. (It is) better to be over staffed for a fire than not, (and) much easier to cancel than to call for help late.”

Firefighters look for salvageable items in the rubble as well as any hot spots and hazards after the fire was extinguished. (Photo/Williams Volunteer Fire Department)

Ponderosa Fire arrived on-scene soon afterward, offering one additional engine. Ash Fork Fire Department was cancelled en-route after it was determined the fire was under control.

“I’m proud of everyone’s efforts on this fire as we were able to stop it in its track and prevent any surrounding structures damage,” Mackay stated in a recent Facebook post. “Once again, thank you for all the kind comments. As volunteers, it means a lot to know we have the support of the people we serve.”

The rental unit was a complete loss. Williams’ resident Mike Larson was renting the house. Other occupants included an adult female and an 8-year-old girl. There was one animal fatality. According to Williams Fire, the family dog was inside the structure. Two other dogs were unharmed. Once the fire was extinguished, fire personnel ventilated the house and began pulling ceiling and walls to ensure there were no hidden fires. The structure was checked throughout the night to confirm no re-ignition had occurred.

April Zicopoulos, victims advocate with Williams Police Department said the Red Cross did reach out to the family after the initial incident.

“Red Cross typically is able to help with financial assistance and some other necessities like blankets, food and water,” she said. “I know that they have a hotel room, so I know they’re OK on shelter.”

Jessica Costa, a friend of the family, said many community members have come together to offer their support to the family including helping to pay for a temporary room at the Days Inn in Williams.

“People have donated clothes, just everything you can possibly think of,” Costa said.

During the May 4 Community Clean-Up, day more than $126 was collected for the family. Donations are still being accepted. Costa said she has been able to secure a storage unit and is asking for larger appliance and household items that can be used once the family gets a home. Until then, Costa said they are primarily seeking everyday items.

“We are asking for toiletries and clothes … or any help with the room,” she said.

Costa said the community has been very supportive in helping the family.

On behalf of Williams Volunteer Fire Department, Schulte thanked the community for their support.

“We appreciate the public support and just also a reminder to please dial 911 when you see an emergency. 911 relies on public input, we don’t get called until the public makes us aware of a call,” Schulte said. “Never assume that an emergency has been reported, please report all emergencies.”