More apartments coming to historic yellow school in Williams
Renovations continue on historic school; 16 new apartments to be completed by the end of the year 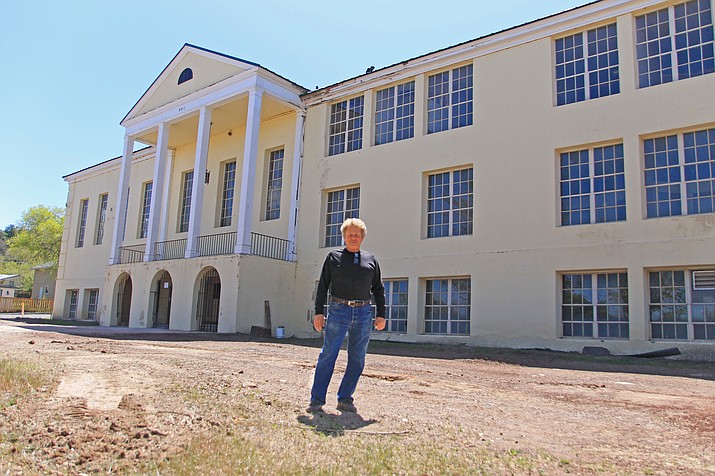 Bruce Bennett has converted six rooms into apartments at the old yellow school in Williams. Bennett is now working on 16 more apartments on the second and third floors. (Wendy Howell/WGCN)

WILLIAMS, Ariz. — Work continues on the old yellow school with six apartments completed and 16 more on the way.

The 40,000 square foot building was purchased by Bruce Bennett in 2005 in a foreclosure sale.

The Old Yellow School was built in Williams in 1938 and was purchased by Bruce Bennett in 2005. Bennett has converted the school into apartments. (Wendy Howell/WGCN)

Since then, Bennett has replaced the roof, sewer lines and water lines, and completely remodeled the back two wings with apartments.

Bennett recently considered selling, but reversed his decision and is continuing to rehabilitate the historic building.

“Many people are doing AirBNB, but I just want to provide affordable housing for the community,” he said. “I’d rather just rent these on a monthly and annual basis.”

Bennett said he believes the most difficult part of the project has been the rehabilitation of the wings, which were an older part of the school.

“I try to take the worst things first, it makes my life simpler,” he said.

The recent focus of the project has moved to the second and third floors of the building, where Bennett is building four studio apartments and 12 one and two bedroom apartments in the old classrooms, lounges and restrooms.

“We’re doing a loft concept,” Bennett explained. “There will be exposed spiral ductwork above the bathrooms that extend into each of the rooms. This will stay open to have light in the kitchen and better circulation of air.”

The studio apartments are mostly smaller rooms that are rehabilitated restrooms or teacher work rooms.

“I’m calling them day rooms,” Bennett said. “They are ideal for the guy or gal that works in Williams 3-4 days a week and then goes back to their home in Phoenix on the weekend. They will have a shower, sink, stove, refrigerator and bed.”

The apartments have numerous windows that look out over Williams and areas to the north and south. Most of the windows have already been replaced following extensive vandalism prior to Bennett’s ownership.

The one and two bedroom apartments are all completely remodeled classrooms that only have a hint of a reminder of the old school. A couple chalkboards and the original wooden floors have been retained in several of the apartments.

Bennett said there have been many challenges to the remodeling process, which began with repairing the vandalism to the building and replacing the $200,000 roof.

“It’s been really hard to find qualified laborers too,” he said.

With his focus on the second and third floors of the building, Bennett is still considering options for the bottom floor that include the original cafeteria, gymnasium and other rooms.

“On the first floor, the city has given us the ability to have some commercial services in there,” he said. “They are positive toward anything that’s noninvasive to the public since we are surrounded by residential. Places such as an accounting office, doctor’s office, travel agent or counselor.”

Each apartment comes furnished, with the occupants paying their own utilities. Bennett hopes to have the 16 new apartments complete by the end of the year.

Bennett has several property development projects he is working on across the state, but said he has been pleased to work with the city of Williams.

“They have been excellent to work with — the public works, building department, mayor’s office,” he said. “They’ve been as good as it gets.”

The old yellow school was the third school built in Williams. The first was built in 1894, at the same location as the yellow school on Sheridan and Third Streets, and was two stories high, one room wide and one room deep. The building was expanded in 1900, but burned to the ground in 1912.

The old yellow school has a long, rich history in Williams starting in 1938 when it was first built. (Wendy Howell/WGCN)

That same year, a second building was erected in the same location with two wings that jutted to the south that were added a few years later.

In 1938 residents passed a $58,000 bond to reconstruct a third school on the same property. The two original wings added in the early 1920s were retained and the new yellow school included 18 classrooms, two offices, a basement and a gymnasium.

In July 1977, WUSD completed a new school in its present location on North Seventh Street.

The old yellow school was eventually sold to Frances Reuter, and subsequently purchased by Bruce Bennett in 2005.