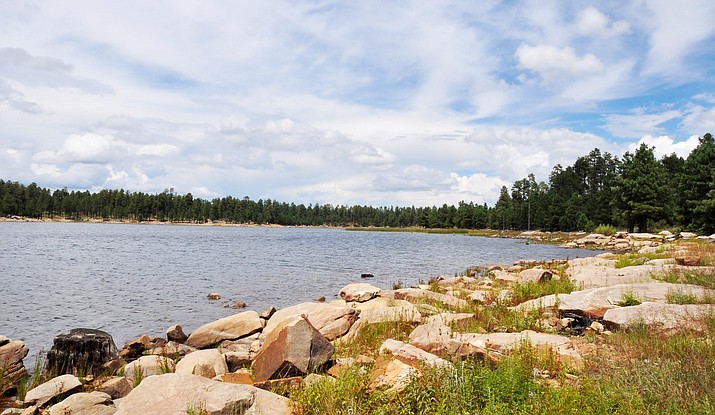 FOREST LAKES, Ariz. – Around 4:11 p.m. May 6, Coconino County Sheriff’s Office responded to a report of a drowning in Willow Springs Lakes outside of Forest Lakes, Arizona.

The reporting party had been fishing the lake with his family. As the family walked around the lake, they heard a person yelling for help and could see a man in the water struggling. The reporting party entered the water, swam to the man and was able to get a hold of him and get him part way back to shore, but the man’s body went limp. The rescuer was unable to pull the man to shore. The victim’s body slipped under the surface of the water and out of sight.

The rescuer called 911 and Forest Lakes Fire Department as well as the resident sheriff’s deputy from Forest Lakes responded.

Upon arrival, the deputy commandeered a small boat and summoned the help of other fisherman already on the lake to check the area where the man was last seen. The deputy and fisherman were unable to locate the man’s body.

The presumed victim was identified as Danny Boyd, 68, from Pine, Arizona. Boyd was at the lake fishing with family members. The family was preparing to leave the area when Boyd wanted to make another trip out on the lake in a small fishing boat. Family members were out of view of the lake and did not see what occurred. There are no reported witnesses to give investigators an idea of how Boyd ended up in the water. The boat was located submerged in the area where the rescuer had first observed Boyd struggling in the water.

Willow Springs Lake was closed to public access as search and rescue teams searched for Boyd’s body. A dive team from the Gila County Sheriff’s Office Search and Rescue team was called in to conduct dive operations. The Arizona Game and Fish Department is providing a larger boat and staff to try and recover the submerged boat.

Dive operations started early this morning and the Gila County Sheriff’s Office located the victim’s body around 11:30 a.m. The body will be taken to Coconino County Medical Examiner’s Office where an autopsy will be performed.

Willow Springs Lake will open to the public as soon as search and rescue teams complete their mission and the boat is recovered.

Drowning was the reported cause of death in four out of every five recreational boating fatalities in 2017, according to the U.S. Coast Guard’s most readily available statistics. In the 449 water-related deaths that year, 370 people — approximately 84.5 percent — were not wearing a life jacket. Those statistics are reflected in Arizona – there were eleven recreational boating fatalities in the state last year and sadly, we’ve already had our first fatality of 2019 that involved a kayaker that was not wearing a life jacket. These deaths are preventable.