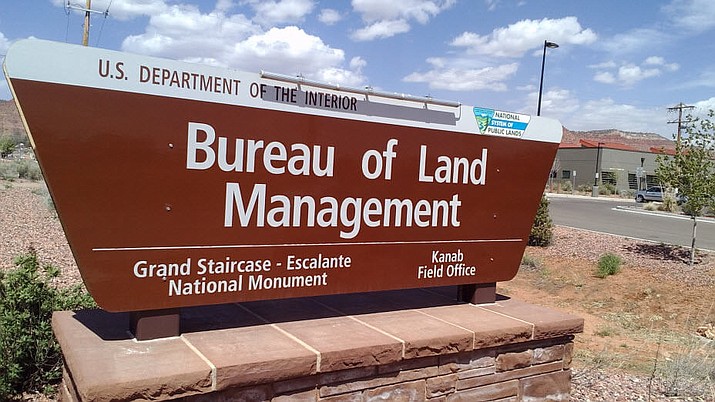 The U.S. Interior Department said April 30 it plans to choose a Western city as the new headquarters for its vast public lands holdings by the end of September. (Photo/Bureau of Land Management)

DENVER (AP) — The U.S. Interior Department said April 30 it plans to choose a Western city as the new headquarters for its vast public lands holdings by the end of September.

The department also said it may move the headquarters of its U.S. Geological Survey — best known for monitoring earthquakes and publishing detailed topographical maps — to the Denver area.

Both agencies currently have their headquarters in the Washington area.

The department wants to move the Bureau of Land Management to the West to be closer to the land it oversees. The bureau manages nearly 388,000 square miles (1 billion square kilometers), and 99 percent is in 12 Western states.

Officials said previously that Arizona, Colorado, Idaho, New Mexico and Utah are in the running for the new bureau headquarters.

Zinke — who stepped down in January amid ethics allegations — and current Interior officials have said the reorganization will make the department more efficient and bring policy makers closer to the people most affected by their decisions.

Skeptics, including some Democrats in Congress, say the plan is a waste of money and suggested it was a way to get rid of employees by forcing them to move or quit. Department officials dispute those claims.

Scott Cameron, a deputy assistant secretary at the department, appeared before the House Natural Resources Subcommittee on Oversight Investigations April 30 to defend the plan. In testimony and a written statement, he said the department is still drawing up the details, including what the directors of the newly created regions would do.

Cameron said about 40 Bureau of Land Management positions would be moved West this year. He said the bureau would ask employees to move voluntarily rather than forcing them.

He said the department hopes to decide on the location for the new bureau headquarters by the end of the fiscal year, which is Sept. 30.

Cameron said the Geological Survey does not have money in this year’s budget to move many employees. He noted the agency already has a big presence in the Denver area, including the National Earthquake Information Center.

He said the Interior Department would ask Congress for another $27.6 million next year to continue the reorganization. Lawmakers approved $17.5 million for this year.