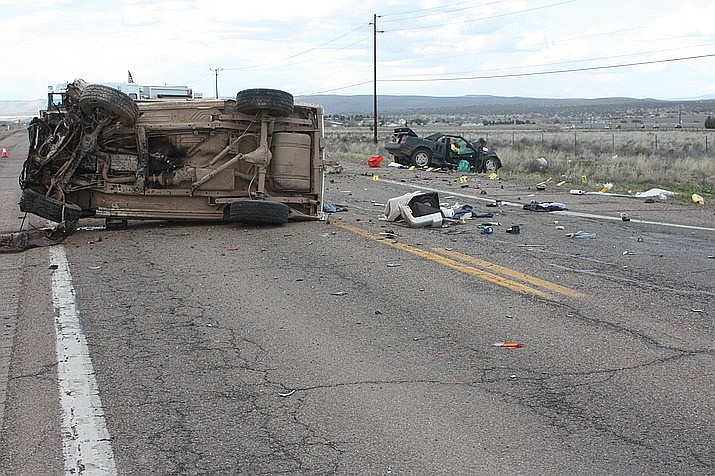 CHINO VALLEY, Ariz. — A second person has died from injuries sustained in a major collision on Highway 89 in Chino Valley March 18.

The first to die, Sadie Buntin, 17, from Paulden, was declared dead at the scene shortly before 4 p.m. She was driving a black 1985 Toyota MR2 that police believe collided head-on with a 1999 Jeep Cherokee. Her passenger, 18-year-old Nicole Nanni from Paulden, was pulled from the wreckage and transported via helicopter to Flagstaff Medical Center, where she later died, according to the Chino Valley Police Department.

Both Buntin and Nanni were Chino Valley High School seniors. The Chino Valley Unified School District released the students’ names March 19, and announced that grief counselors are available at the high school for anyone who would benefit from those services.

“We ask that you keep the friends and families of Sadie and Nicole in your thoughts and prayers,” the school district posted on its Facebook page.

A third and final victim, 44-year-old Scott Enyart Jr. from Paulden, was pulled from the Jeep and also transported to Flagstaff Medical Center, where he is listed as stable but in critical condition.

When emergency responders arrived, they found the Jeep resting on its side in the southbound lane of the highway and the MR2 just off the east side of the highway with its “front end completely crushed in,” Chapman said.

Highway 89 was closed in both directions at 3:27 p.m. and remained closed until about 6:37 p.m., Chapman said. Through traffic was diverted onto Old Highway 89.

The caused of the accident has not yet been determined, Chapman said. Investigators were unable to locate anyone who witnessed the accident. Any possible witnesses are asked to call (928) 771-3260.

“There could have been a chance that nobody happened to be there when it occurred,” Chapman said.

Police are also waiting for toxicology reports to determine if impaired driving had anything to do with the crash.