Is the drought over? El Niño delivers wetter than average conditions to the southwest 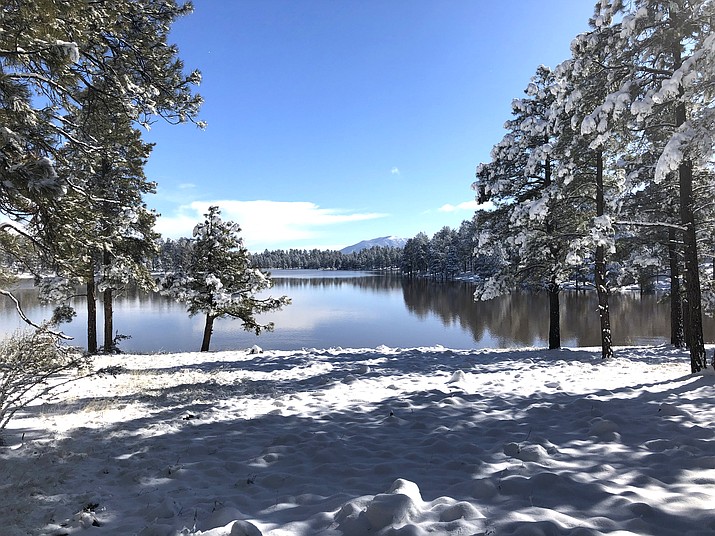 WILLIAMS, Ariz. — Above-average rain and snow in northern Arizona have pulled Coconino County out of the drought in place since mid-2017,

Coconino County and other areas of the southwest are no longer considered to be in a drought after the wet winter. (US Drought Monitor/graphic)

according to the U.S. Drought Monitor.

“We all have enjoyed the precipitation from the fall and this winter,” said Brian Klimowski, meteorologist in charge for the National Weather Service in Bellemont. “It was a nice mix of rain and snow. It has been a very beneficial winter for everyone in Coconino County.”

Between Oct. 1 and March 25 Williams has received over 21 inches of precipitation, according to Klimowski. The average precipitation for Williams is 11.6 inches.

Since January, Williams has received about 16 inches of precipitation, which is almost 2.5 times above normal.

For snowfall, Williams received between 96 and 102 inches since Oct. 1. The average snowfall for Williams through March 25 is 66 inches.

Although this has been a wetter than average winter, scientists at the NOAA Climate Prediction Center said El Niño officially arrived last week.

“You noticed this year that we had quite a few warm storms that were pretty rainy,” Klimowski said. “One pretty epic rain on snow event in early February — that’s typical for an El Niño winter, and I don’t see this changing over the next month.”

Weak El Nino conditions are likely to continue through the Northern Hemisphere in the spring and summer. (NOAA/graphic)

For the Southwest, El Niño results in below-average temperatures and above-median precipitation. It is based on the warming of sea surface temperatures in the equatorial Pacific Ocean that occurs every two to seven years where the ocean warms for six to 18 months.

El Niño was originally recognized by fishermen off the coast of South America in the 1600s, with the appearance of unusually warm water in the Pacific Ocean around Christmas.

The center said above-average rain and snow in California this winter has pulled the entire state out of its seven-year drought. Scattered areas of the Southwest, Southeast and Pacific Northwest are abnormally dry, but the worst drought conditions in the U.S. are in northern New Mexico.

Springtime rain and melting of deep snowpack are favored to slightly improve the drought there. However, drought will persist through spring in southern Alaska and Oregon, and may develop in Hawaii.

What should Williams expect this spring?

Weather forecasts for the next few weeks are for soggy conditions across the southern U.S., which is common with El Niño.

Klimowski said the spring and summer outlooks from the Climate Prediction Center lean toward warmer than normal temperatures and wetter than normal precipitation over the western U.S. He said the atmosphere is well coupled with oceanic temperatures so there is an abundance of storms and an abundance of moisture in the equatorial Pacific, which is continuing to move this way.

“Based on what I’ve seen, I’d lean toward being more optimistic toward even wetter than what they are showing,” he said. “I really don’t see any change from what we’ve been seeing which is a continuation of these storms that roll through once or twice a week. Some might be windy and showery, some might be more intense. But I really don’t see any stop for the next month or so.”

How does this affect the monsoon season?

The monsoon season is driven by the heating of the southwest U.S. and Four-corner area, which causes a thermal low that changes the wind circulation pattern and brings in the monsoons, according to Klimowski.

“When its wetter than normal, that heating is delayed and the monsoon can then be delayed,” he said.

Klimowski said if this season is like the 2017 monsoon season, the monsoons could begin a week or more later than average.

“But don’t make the mistake of thinking since it’s a late monsoon, it will be a weak monsoon,” he said. “There’s no correlation between the onset of a late monsoon and just how much rain falls during the monsoon.”