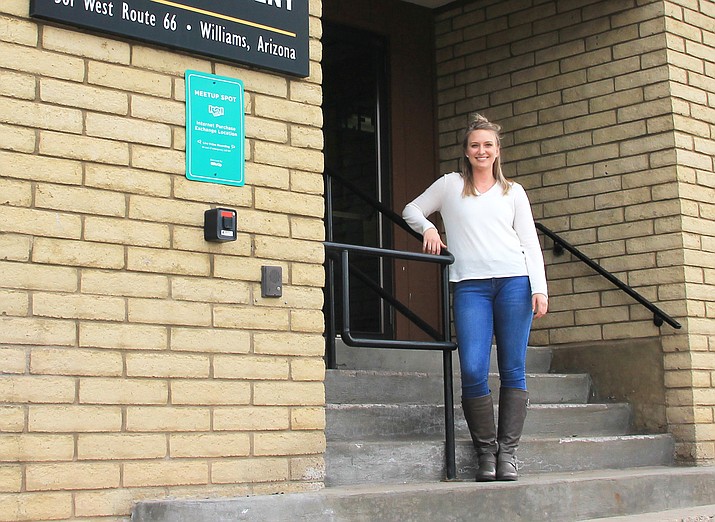 April Zicopoulos works with victims of crime through her new position with the Williams Police Department. (Wendy Howell/WGCN)

WILLIAMS, Ariz. — Although Williams Police Department victims advocate April Zicopoulos has only been on the job for two weeks, she has already begun work on several cases.

Williams Police Department recently recruited Zicopoulos as its new outreach advocate. Zicopoulos will help anyone who has suffered direct physical, emotional or financial harm from a crime being committed.

Zicopoulos said she can help anyone who is a victim, whether law enforcement is involved or not.

“To start, I’m letting victims know they have rights and know what those rights are,” she said.

In addition to victim’s rights, Zicopoulos also helps victims find the resources and services they need.

“I know we (Williams) don’t have a lot of resources such as shelters, but I can find the resources that they need,” she said.

Zicopoulos said her role also is to help victims navigate the court system. She can assist victims with obtaining an order for protection or pressing charges against someone.

“This position allows me to go to court with them, or if they are uncomfortable, I can go on their behalf,” she said.

“I can contact prosecutors, court clerks and anyone else involved in the system to get the victim what they need and notify them of what is going on,” she said. “The don’t have to deal with more than they have to, because it’s already a traumatizing time.”

“They can come talk to me,” she said. “It’s a confidential position under certain mandated guidelines. I can help them with anything they need and if it is something I don’t know, I will find out for them.”

Zicopoulos said she has access to resources such as shelters and other protective services.

“The crisis response is basically for 24-48 hours safety,” she said. “I want to make sure the victim is safe from the time I get called out, and then I’ll follow up the next day and stay with them throughout their case.”

“Anything they are falling victim to,” she said.

Although Zicopoulos is new to the victims advocate position at Williams Police Department, she comes into the role with experience.

While a student at Northern Arizona University, Zicopoulos worked as a residential advisor at one of the dorms.

“It was really important to me to working with students while also being a student,” she said. “I knew what they were going through and how important it was to get the help that they needed. I saw them go through crisis like sexual assault, which happens a lot in college.”

“They had an advocate on the NAU campus, so I worked with them for sexual assault victims that I had. I got to learn about who they were and what they did.”

After graduating with a criminal justice degree from NAU, Zicopoulos met with Williams Police Chief Herman Nixon about a victims advocate position with the department.

“I think the chief saw a need for it in our community,” she said. “It was a role I was really excited about it was in a community where I grew up.”

Zicopoulos is a Williams High School graduate with extended family in the community.

Zicopoulos said she plans to bring more awareness to the community about what a victims advocate can do. She said she would like to work with the schools and connect more with the community.

She said she also hopes to generate support from local residents and businesses.

“I hope to be able to partner with businesses on food and clothing,” she said. “Ideally if I were to go to a crisis response situation, a victim many need food or other items and it would be nice have a backpack of supplies I could pass on to them.”