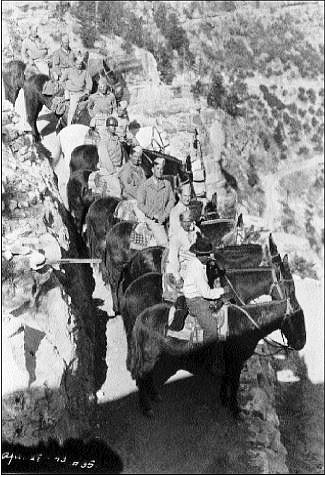 Gray wolves once roamed northern Arizona, including the North Rim of the Grand Canyon.

Conflicts with budding tourism businesses and ranchers, however, led to the species being eliminated from the North Rim. USFWS believes the last of the North Rim’s gray wolves was killed in the 1940s.

Because men were called to the front during World War II, and their wives were taking jobs to support the families and war effort in their absence, visitation to the Grand Canyon fell drastically from 1941-1944. Gasoline was rationed, meaning fewer families jumped into their automobiles on road trips. The NPS reported nearly one-third of the park’s visitation from 1941 to 1944 were enlisted soldiers on leave or those stationed for maneuvers in nearby Kingman.

After moving to Flagstaff in 1945, John Harvey Butchart fell in love with hiking the Grand Canyon.

After hiking most of the main routes, he began to explore unofficial routes and animal trails. He was eventually credited with discovering over 100 rim-to-river routes within the canyon. In 1963 he completed the route along the entire length of the canyon.

After rafting down the Colorado River through the Grand Canyon with a friend in 1945, Georgie White Clark was hooked. By 1947, she was leading her own river trips down the Colorado River, charging nearly 75 percent less than her male counterparts and making the sport accessible to the masses for the first time. 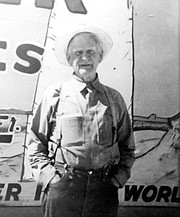 Albert “Bert” Loper died in 1949 at age 79 while rowing his self-built boat through Grand Canyon. (Photo/NPS)

1949 Bert Loper, “Grand Old Man of the Colorado,” dies during a rafting trip

As a miner on the San Juan River, Albert Loper discovered his love of river running as early as 1907.

He made his first boating run through the Grand Canyon in 1939 on a two boat trip. Along with his other boatman, Loper ran a wooden boat through Lava Falls, the first time two boats on any one trip had attempted the feat.

In 1949, the 79-year-old Loper attempted another river run of the Colorado River through Grand Canyon. While rowing through Marble Gorge, he became unresponsive and flipped in the rapid. His remains were discovered in 1975.