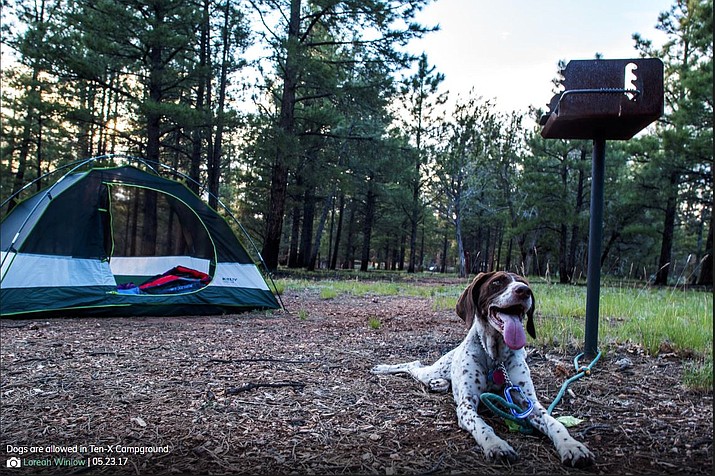 Reservations for Grand Canyon National Park campsites are often filled months in advance, and while Ten X campground sites are offered on a first-come, first-served basis, Kaibab National Forest’s Dutch Maatman said the campground is often filled to capacity during its May-October season.

“We sit about around 100 percent occupancy between Memorial Day and Labor Day,” said Maatman, who serves as the forest’s assistant recreation staff officer. “We frequently are turning people away to go disperse-camp in the woods.”

In order to accommodate a growing number of visitors looking for an outdoor experience as well as those looking for a lower-priced place to lay their heads at night, Maatman said a proposed expansion of the campground from 70 campsites to 300 is designed to grow with demand.

“We based the number (of proposed additional campsites) off both the current demand, but also future demand as visitation at Grand Canyon is likely to continue to increase,” he said. “We’re trying to plan this out not just for next year, but 10 to 20 years down the road.”

The proposed expansion would include a total of 300 campsites, divided up between individual sites, group sites, and expanded sites for large recreational vehicles, which Maatman said the original footprint, built in the 1970s, wasn’t designed for.

The expansion would be completed in phases, based off community and visitor input, and the 300 total sites is considered a complete buildout of the site.

Maatman said the first phase of the expansion would likely see about 60 to 100 new campsites built along two or three new loops fanning out from the original footprint. New campsites would be added in subsequent years to keep up with demand and based on available funding from the Forest Service. Maatman said even though many more sites will eventually be added, the sizes should remain similar to what they are now.

Along with providing additional recreation opportunities, the expansion could alleviate some of the conditions that affect the visitor experience, including walk-in campers who try to set up on reserved sites or visitor conflicts when campers try to set up in between designated sites. Safety is also a concern, as the site is currently only accessible via one access road.

Upgrades for a new age of campers

Like everything else, technological advances haven’t left the outdoor recreation experience untouched, regardless of a debate over whether outdoors should also mean unplugged.

Because some modern campers may expect more amenities, Maatman said some future plans for Ten X campground may include common areas for the tech-savvy. Although current plans don’t call for new electrical lines or full RV hookups, Maatman said planners are looking to develop a common area for one-stop shopping for overnight guests.

“Folks can come and fill up water, they can drop off trash, they can pay fees, get information about the local area, as well as possibly charge their (electronic) devices,” he said.

The forest service is also proposing some educational elements, such as an amphitheater for campfire and conservation activities, as well as a visitor center that can accommodate non-cash payment and multiple languages.

Nothing is set in stone, though, and that’s why the Forest Service is interested in gathering public comments.

The project is currently in the public scoping process, and Kaibab National Forest is seeking input from both visitors and community members to help them develop its final vision for the campground.

“The idea is to be responsive to public input and then refine the proposal,” she said.

Once the scoping period is completed, the proposal will be guided through the National Environmental Policy Act (NEPA) process, which will determine any impact on the local environment and mitigations that may need to be put in place.

“Any time you put a road in or a campground, you have a ground-disturbing activity and potential impacts to the environment,” Leonard said. “We identify and disclose (the impacts) and then the final decision-makers weigh the impacts against the benefits.”

Once public input is considered and analysis from experts is compiled, Maatman said a draft environmental assessment will be ready for public review. That draft is expected later this spring. Leonard said a public comment period can help drive alternatives to the proposal if concerns are raised.

Maatman said the initial goal is to break ground on the project next spring.

Amphitheaters, visitor centers and rows of large RVs may make it seem like the vision for Ten X is a small city, but Maatman stressed that maintaining the rustic feel of the campground was a top priority.

“Ten X campground has been around for a while and there are people in the area that are really familiar with the campground,” he said. “The campground that we’re interested in building is one that retains the original rustic and natural character of Ten X. We’re not looking to overbuild this to a big RV campground, we’re looking to retain the rustic character that people have been returning to Ten X for.”

Submit your comments by March 29

The Kaibab National Forest encourages public participation in the development of proposed projects and is seeking input and comments on the Ten X Campground Expansion project. Specific, written comments should be received no later than March 29.