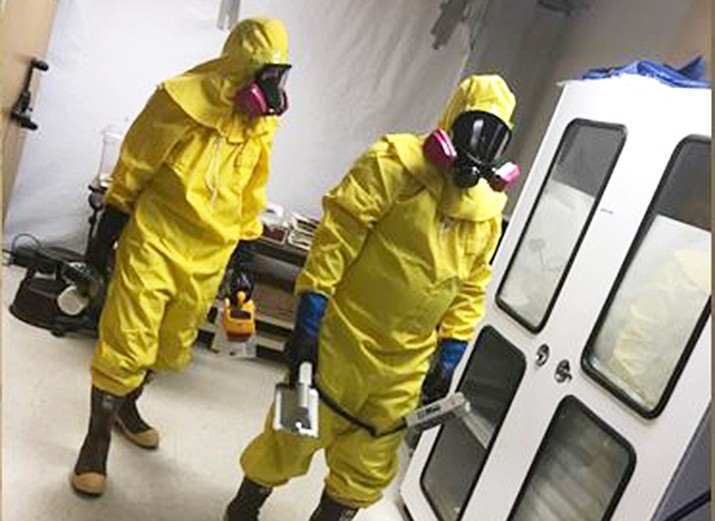 The National Park Service and Interior Department coordinated the safety review, which used historical documentation and information gathered from personal interviews to develop radiation dose estimates from exposure that may have been present when the samples were stored in three five-gallon buckets in the building. The final report is expected to be released in 90 days.

The review was triggered by a series of emails from the park’s safety, health and wellness manager, Elston Stephenson, stating employees and visitors to the Museum Collection building, including school children, may have been exposed to radiation from uranium ore samples stored in the location for almost 20 years.

The discovery was made in March 2018. Around mid-June, a team of NPS technicians came to the park to investigate, taking radiation readings from various locations in and around the building and removing the specimens from the premises. A report from Intermountain Region Occupational Safety and Health Manager Bill Bouley indicated some areas tested in June exceeded safe doses determined by the Nuclear Regulatory Commission (NRC).

After those readings were taken, the samples were dumped in Orphan Mine, a now-defunct uranium mine below the South Rim.

Preliminary findings in the new report, however, indicate that the previously-reported radiation measurements taken in June 2018 were significantly overstated. New radiation measurements and instrument comparisons appear to demonstrate that the actual radiation levels were significantly lower than initially believed and that radiation levels are consistent with naturally-occurring background radiation and readings found in other areas of the park.

The team surveyed locations within the Museum Collection building that stored the buckets containing uranium ore and determined the areas to be free of residual contamination. Taxidermy specimens from the natural history collection that were stored in close proximity to the buckets were surveyed and also determined to be free of residual contamination.

“We greatly appreciate the expertise and leadership of the team that conducted the review," she said.

The team included radiation, industrial and occupational health specialists from various agencies of the government and an independent organization. The specialists reviewed material, conducted interviews, measured radiation levels and clarified relevant facts regarding the issue, according to a press release from the park.

The team provided recommendations regarding the handling of museum mineral specimens, including uranium ore and other specimens that contain naturally occurring radioactive elements.